Wisconsin is the ‘number two’ dairy state in the U.S., after California. No surprise then that the Canola Council of Canada (CCC) has a focus on marketing Canadian canola meal to the Wisconsin dairy industry. “Exports of canola meal to Wisconsin are steady and an important part of all U.S. canola meal exports,” explains Brittany Dyck, CCC manager of canola meal. “However, current usage levels in dairy diets can be low.”

Dyck and her team recognize that the dairy feed industry in Wisconsin is quite different than it is in California, the biggest U.S. market for canola meal. In Wisconsin at present, canola meal faces tough competition from soymeal meal, an established protein source, and from other protein sources such as dried distillers’ grains with solubles (DDGS) and cottonseed.

Numerous studies have been conducted on the inclusion of canola meal in dairy cow diets. Ken Kalscheur says results indicate canola meal can successfully replace other byproducts and protein supplements. “One meta-analysis report which compiled the results from 49 studies showed that milk production increased 1.4 kg per cow per day when canola meal was included, compared to all protein sources, but was similar when compared directly with soybean meal,” notes the scientist at U.S. Dairy Forage Research Center in Madison, Wisconsin. “More recent research completed at the Center demonstrated that when canola meal was included in the diets of high-producing dairy cows in early lactation, milk production increased 4.45 kg per cow per day.”

Kalscheur says that while more research is needed to determine where canola meal best fits in the lactating dairy cow diet, research results indicate that it has “very good potential
to be included in high-producing dairy cow diets in Wisconsin and throughout the U.S.” 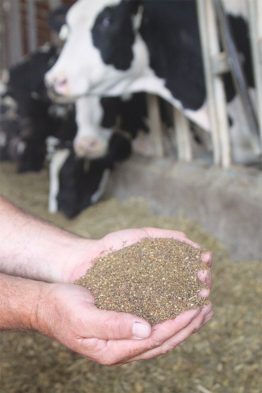 In the fall of 2017, Dyck met with a respected independent group of consultant dairy nutritionists in Wisconsin and the surrounding area (called GPS Dairy Consulting). She wanted to both gain a better understanding of how they and other nutritionists typically formulate dairy cow diets, and also to see if these nutritionists had everything they needed from existing research results in order to confidently incorporate canola meal in their formulations.

The nutritionists at GPS agreed to ask some of their existing clients if they would be willing to participate in a study where the value of canola meal could be demonstrated in comparison with their existing protein sources. Two large dairies agreed to come on board, and the study was carried out by GPS and CCC during the winter and spring of 2018. Dyck says the study was intended to demonstrate that high levels of canola meal can support the maintenance of milk yields, as well as potentially reducing feed costs and creating efficiencies on farm.

“The trial was a great success, demonstrating improvements in milk yields, reduced feed costs towards the end of the treatments, and efficiencies on one farm because high-cost expeller soybean meal was no longer required to be purchased and stored.”

At the time, dairy cattle on both farms were being given rumen-bypass expeller soybean meal. Farm one was giving canola meal at eight per cent of the diet, but farm two was feeding no canola meal. For the study, all soybean meal products were removed from the diet; farm one’s canola meal inclusion was bumped up to 12 per cent, while farm two was eight per cent. The cost of the two diets was almost exactly the same for this trial.

On both farms, daily milk production increased, by nearly two litres per cow on farm one and a whopping 3.5 litres per cow on farm two. Dyck notes that the diet for farm one (the higher level of canola meal) resulted in a somewhat greater milk protein and fat yield. With the second herd, milk protein yield increased, while fat yield remained the same.

“The trial was a great success, demonstrating improvements in milk yields, reduced feed costs towards the end of the treatments, and efficiencies on one farm because high-cost expeller soybean meal was no longer required to be purchased and stored,” Dyck says. “With benefits like these, it is not at all surprising to me that the owners of both farms decided to keep their cattle on the trial rations after the trial ended.” Dyck is not sure if that is still the case.

CCC is now working to disseminate the results of the demonstration trial to Wisconsin dairy farmers through traditional means and social media.