Alberta Canola’s 30th Annual General Meeting (AGM) takes place during the FarmTech Conference on January 28. There is no charge to attend the AGM, and registration to FarmTech is not required to attend the AGM. For details, visit farmtechconference.com.

AGM agenda includes: A review of the activities, audited financial statements and budget for Alberta Canola.

For information on the FarmTech conference visit farmtechconference.com. 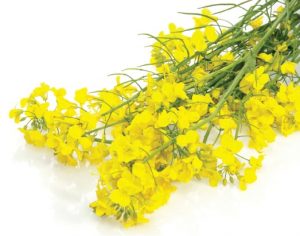 Just over 50 years ago, on November 26, 1969, an educational opportunity for area farmers was held in Fairview, Alberta. The Alberta Rapeseed Seminar introduced farmers to the possibilities this new crop might have for them and their farm businesses.

In that year, Statistics Canada records that 265,354 tonnes of rapeseed were produced on 816,000 acres in Alberta – an average yield of 0.33 tonnes or 14 bushels per acre. The crop contributed under $50 million, or five per cent, of total farm cash receipts.

Later that same day, the provisional Board of the Alberta Rapeseed Association was elected by the farmers attending the seminar. The goal was to develop this new crop for the betterment of Alberta farmers and the agricultural industry.

Twenty years later, Alberta Regulation 158/89, the first regulation enabling the establishment of a refundable producer check-off, was approved by Ernie Isley, Minister of Agriculture, Food, and Rural Development. This caused the Alberta Canola Producers Commission to come into existence on August 1, 1989. In that year, 2.7 million acres of canola produced 1.41 million tonnes with an average yield of 0.52 tonnes or 23 bushels per acre. It contributed $419 million of farm cash receipts – still just nine per cent of the total.

August 1, 2019 marked the 30th anniversary of the creation of the Alberta Canola Producers Commission. In 2018, canola growers in Alberta harvested an estimated 6.7 million acres producing 6.4 million tonnes with an average yield of 42 bushels per acre.

To learn more about Alberta Canola’s priorities and activities – watch our “Year in Review” video or read our annual report. Find them both
at albertacanola.com.

The call for nominations for farmers to serve on the Board of Directors of the Alberta Canola Producers Commission resulted in three canola producers being elected by acclamation. The nomination deadline was October 31, 2019.

Region 4 will see an election between John Mayko of Mundare and Kyle Tarkowski of Myrnam. Eligible producers in region 4 received an information package and a voting ballot before November 30. Ballots will be counted on January 3, 2020.

Michael Ammeter of Sylvan Lake is also returning as a Director for Region 7 after the other candidate withdrew his candidacy for election.

Alberta Canola – Working For All Canola Growers In Alberta 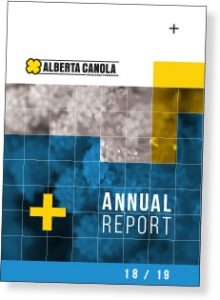 Our activities in these areas are guided by our elected farmer directors and driven by our mission statement: To improve the long-term profitability of Alberta’s canola producers.

For complete details, check out our Annual Report and our ‘Year in Review’ video (featuring the farmer directors) on our website at albertacanola.com/annualreport.