The farmer panel at Canola Discovery Forum 2019, hosted by the Canola Council of Canada in Winnipeg in November, featured these four farmers sharing their most valuable integrated pest management (IPM) strategies.

Clubroot is the biggest threat on Scott Keller’s operation. Keller farms south of Camrose, Alta., and runs a four-year rotation of wheat, canola, malt barley and a pulse – alternating between peas and fababeans. His main tactic to keep clubroot at bay is crop rotation. “You can’t do integrated pest management without having a good crop rotation,” he says. “It’s the backbone of any plan.”

The seriousness of the disease didn’t set in until it was in his own backyard in 2014. His operation was running a one-in-three canola rotation at the time and adopted resistant varieties right away. “What we’ve learned from experience over the last decade is that we’re really bad at identifying clubroot when it’s at very low levels,” Keller says. “Just because you haven’t found it, doesn’t mean you don’t have it, so let’s start using these resistant varieties.” Rotating between different seed companies’ technology is also essential for maintaining the durability of the resistance, he adds.

A longer crop rotation provides Keller’s farm a layer of defence from clubroot, despite what his neighbours might be doing. “Clubroot is not just going to blow in like kochia across the fence line,” Keller says, before adding that even if some contaminated dirt does make its way into the field, your crop rotation is your shield against it. Spore loads significantly reduce within the first two non-host years, so the introduced clubroot won’t establish as fast when compared to a tighter rotation.

Keller says it would be nice to have a tool that helps producers diversify their rotation based on what can be grown in their region. Some producers can grow up to seven different types of crops, but some regions are not as versatile.

When it comes to what IPM strategies rank lower on the list of importance, for Keller, it’s sanitation. From a clubroot management perspective, he says crop rotation and using resistant varieties are far more important for him. He still knocks off dirt off equipment and will water down equipment here and there, but he doesn’t always bring the bleach mix out if it’s dry weather.

To ensure a strong crop, he plants canola early so the plant can stay ahead of any weeds that come. “Weeds and crops are competing for light and water,” he says. “When my crop is there, the weeds aren’t there.” He also makes sure to use enough seed to be competitive. Some growers might be experimenting with a reduced seeding rate or increased row spacing given the price of seed, but Friesen says that this practice leaves more space and time for weeds to fill the gaps.

Friesen’s biggest weed problem is volunteer canola. He would like to see more research on controlling volunteers, especially as seed companies are starting to stack more traits like glyphosate tolerance and dicamba tolerance. What tools will growers have to control those volunteers?

Friesen comes at this issue with a PhD in herbicide resistance, knowing just how resilient crops can be. There’s an opportunity for the Canola Council to take a leadership role in resistance extension knowledge, he says. He shares an experience about the University of Western Australia: “If farmers had questions, they could come to one person who all they did was herbicide resistance,” he says. “We don’t have that here, so there’s piecemeal people everywhere trying to solve the problem.” 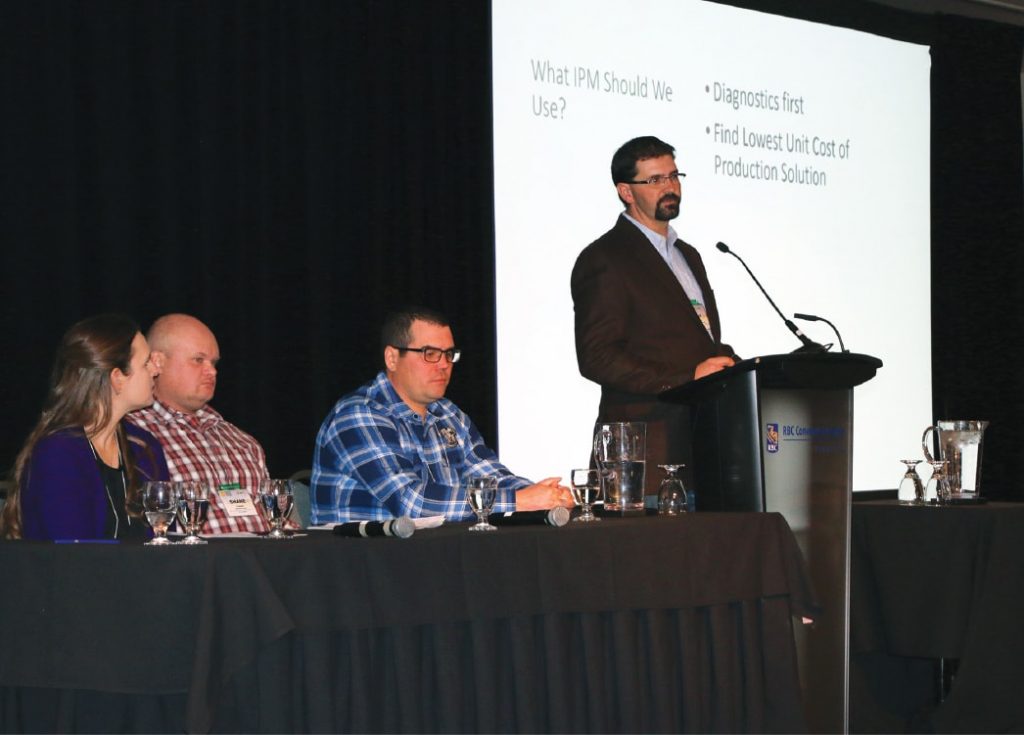 “If I’m going to run a sclerotinia trial, I’m going to need to achieve a certain level of sclerotinia in order to have meaningful data,” Maxwell explains. To boost sclerotinia in canola, the team will go for a variety that doesn’t have resistance and plant at a high seeding rate so a dense, humid canopy can be achieved. They will also plant in all the alleyways to cut down the amount of wind that is circulating in the plot. On top of this, they’ve selected a plot already running a tight two-year rotation and added inoculum. “Then I’m going to add water,” she says. “I’ll mist irrigate the crop and see how sick I can make it.”

These efforts have taught her a few things about IPM. Maxwell commends the work being done by breeding companies because it still takes time to infect the canola. “It is getting harder to infect [newer varieties] of canola with sclerotinia. If I had access to 20-year-old varieties I’d probably have really good levels of sclerotinia,” Maxwell says. She would like to see more research dedicated to reviewing the fundamental agronomic questions but with newer canola hybrids.

No IPM strategy is left behind in the research trials. She notes that while some growers can get away with a rough clean, her research company has to implement sanitation measures – from cleaning equipment to giving boot covers to visitors – given its position in the industry.

With a rotation that includes everything from chickpeas to cattle, Troy LaForge employs multiple IPM strategies. LaForge farms at Cadillac, Sask, and the farm grew lentils, durum, barley, flax and mustard this year, with canola in the works for 2020.

“It’s important to diagnose the issue before treating it.”

Before deploying IPM strategies, diagnostics come first. “I see all too often that we’ve got tools going on a farm that don’t even suit the farm,” LaForge says. “It’s important to diagnose the issue before treating it.”

Aphid control occurs naturally and LaForge cites work by Dwayne Beck out of Dakota Lakes Research Farm in South Dakota showing that certain fungicides kill fungus that controls the aphids. While LaForge still use fungicides if he has to, he does his best to allow ladybird beetles to control his aphid populations before he needs to spray.

LaForge doesn’t push any IPM strategies to the side, noting that all of them carry importance. However, he would like to be more diligent with his record keeping. “So when I go scout, do I always record everything I saw in the field? No I don’t, and that bites me in the butt sometimes,” LaForge says.

In terms of where research can do better, LaForge wants to see more systems research. Research that considers the entire growing system, regional environment, and sets a particular yield target. “What would you actually need to put into a 50-bushel system or 70-bushel system?” Another area that deserves more attention is intercropping. LaForge has seen the value in a chickpea-flax intercrop and feels intercropping has tremendous potential in the industry, but currently lacks support from the way risk management programs are set up right now.