Clubroot can be managed, even in areas that have exposed to high levels of the disease. Clubroot experts at CLUB Day, an event held as part of the Canola Council’s Discovery Forum, explain how.

The recipe for clubroot management has six key ingredients: scout, maintain a minimum two-year break between canola in the rotation, grow a clubroot-resistant variety, control host weeds and volunteer canola, reduce soil movement within the farm and minimize the potential for contaminated soil to be introduced. However, clubroot is an evolving and complex disease that evades simple solutions, including a six-step recipe.

For more on the clubroot recipe, read Agronomy Insights in the November 2019 Canola Digest.

During the Canola Discovery Forum in Winnipeg in November, the Canola Council of Canada (CCC) hosted CLUB Day, which brought together researchers, farmers, agronomists, and industry members to tackle the toughest clubroot questions. The discussions did not debunk the original recipe for management, but put the focus on three most important objectives: reduce spore load through rotation, stay ahead of the disease with scouting and deploy resistant varieties sooner rather than later.

“I think we need growers to understand that clubroot can be managed even in intensive areas that have been exposed to clubroot,” Dan Orchard, CCC agronomy specialist, says.

Every effort must be made to reduce spore loads before deploying a resistant variety. According to Fengqun Yu, clubroot researcher with Agriculture and Agri-Food Canada in Saskatoon, if you deploy CR varieties when the clubroot infection is high, you expose the strain to too many pathogens and reduce its longevity.

CR varieties do not help to reduce an already high spore load. Stephen Strelkov, a plant pathology professor out of the University of Alberta, emphasizes that “so much of clubroot management goes back to spore management. Genetics are just one tool.”

In-field scouting for clubroot cannot be ignored. A producer from Manitoba, who wants to remain anonymous, found clubroot on his farm last summer. He was surprised because he didn’t find the disease by his field entrance – the most common location to detect clubroot – but out in the field. 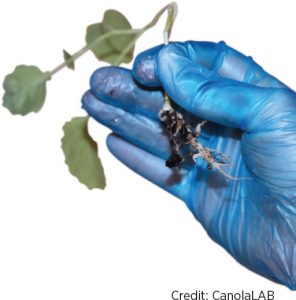 “If you don’t think you have clubroot, you probably haven’t found it yet,” the farmer says.

Provincial clubroot surveys can help, but scouting by farmers and agronomists is the predominant method of finding clubroot. Out of all the field samples that can be tested, the most revealing indicators are the canola roots themselves.

Switching up sources of resistance is a good way to reduce the potential for resistance to weaken. “I foresee in the near future that we will have a better opportunity to identify what pathotypes are lurking in our fields and what resistance genes are in our products, and then deploy varieties with resistance to control the pathotypes present,” Orchard says.

There are currently 36 pathotypes of clubroot in Western Canada, with 19 identified in the past two years. However, there are no commercial options for producers to test what pathotypes lurk in their fields. Despite this, CR varieties remain effective because they target the most common pathotypes.

“It’s like getting a flu shot,” Orchard explains. “You don’t get immunized for a flu that you’re hardly going to run into, you’re getting it for the flu that’s most common in your area. And that’s what’s happening with clubroot.”

Orchard cautions there are exceptions to every rule but says deploying varieties that have resistance to the major pathotypes will work for a majority of the Prairies.

There is not enough CR seed to cover the canola growing region within the Prairies. “With clubroot resistant varieties, we need to focus on putting them in higher risk areas,” Orchard says. For producers in lower risk areas, using a susceptible variety means that other management options, such as a longer break in rotation, need to be used.

“A susceptible variety doesn’t mean guaranteed problems, but you have to understand the risk associated,” Orchard says, adding that some areas have more risk tolerance for clubroot than others. “I think it’s time for us to put some more thought into these maps and forecast models. That way, the seed companies can make better decisions on where the resistant varieties are deployed.”

There are still some unknowns about how clubroot pathogens work with their hosts, but the fundamentals of the clubroot management recipe still hold true even as more information about the disease is discovered.

“The main takeaway from the growers I spoke to was that this disease is far more confusing than they ever dreamed it would be,” Orchard says. “All they want is a simple recommendation, but now they understand that it doesn’t exist yet,” Orchard says. Unfortunately clubroot isn’t simple and requires an integrated management approach.”