What factors kept a lid on canola yields in 2020?

Canola yields in Canada were “average” in 2020. Buried within this “average” is good news out of southern Alberta where farmers had their best year in a long time. In many other areas, fields were looking good in June but then fizzled to average by September. Most farmers were probably satisfied with the result, especially since it came with a relatively smooth harvest – at least compared to 2019. But yields can always be better, especially since averages are still 10 bu./ac. below the 2025 canola industry target of 52 bu./ac.

This article looks at major yield robbing factors in 2020.

Hotter than average July temperatures, especially in Manitoba and Saskatchewan, hit canola right at flowering – which is the worst time for a heatwave. Historically, canola yields are lower in warm years and higher in cool years. Heat at flowering damages pollination and reduces seed formation, resulting in high levels of missing or empty pods. Canola will flower longer to compensate, but it can never make up for lost yield from heat during the first two weeks of flowering.

CCC agronomy tips: A uniform crop seeded within the first two weeks of May has a better chance of flowering ahead of the hottest days of summer. The Canola Council of Canada (CCC) agronomy specialists recognize some of the risk and challenges with early seeding, so encourage seeding based on soil temperature, soil moisture and weather forecast to hopefully achieve more rapid emergence. Selecting hybrids that are best suited to a farm’s particular environment is also important. Farms in areas where July highs and lows are hotter than in other parts of the Prairies may want to ask seed companies about hybrids with higher heat tolerance and seek early maturing varieties that tend to also flower a little earlier. Finally, the message of balanced fertility can reduce susceptibility to stress.

Wet-then-dry means roots not there when needed

When the year starts off with ample soil moisture, roots may not grow as deep. Then if rains stop part way through the season, which is what happened in 2020, plants tend to put more energy into root growth to access moisture reserves lower in the canopy, which means less energy for seed production.

CCC agronomy tips: Stand establishment is all about getting plants out of the ground and photosynthesizing. Emergence was good for the most part in 2020, compared to previous years, but when weather turns dry, the key message is to make sure any further inputs are assessed more rigorously. This is all about scouting and making decisions on a field by field basis based on the likelihood of economic return. 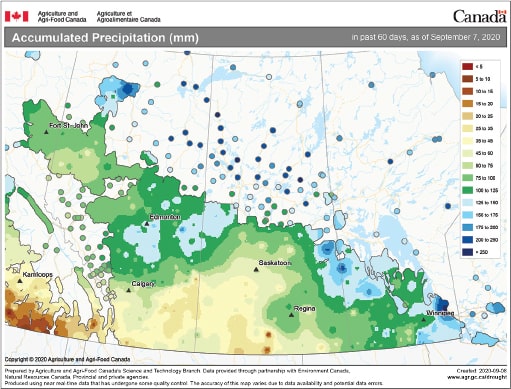 This map shows how the season changed. This is rainfall accumulation across the Prairies for the 60 days leading up to September 7.

The season started with ample soil moisture. Snow and rain that delayed harvest in the fall of 2019 meant that soil moisture heading into 2020 was high for many areas of the Prairies. This was good for the most part, but created particular challenges for two important canola-growing areas. (1) Precipitation in fall 2019 meant that large areas of the Peace still had crop to harvest in spring 2020. (2) Areas in north central Alberta and northwest Saskatchewan had field access issues due to spring moisture. Both factors slowed seeding progress.

By the third week of May, Alberta seeding progress was 19 per cent behind the normals, while farmers in southern Alberta, Manitoba and Saskatchewan farmers were seeding at a “normal” pace, on average.

CCC agronomy tips: Agronomically, there is not much to do for fields that are too wet to seed or that get drowned out due to moisture. The message at that point is about planning for next year, which includes soil tests to account for nutrient reserves that will be difficult to predict. Water flowing across the land can also move clubroot spores, so consideration for clubroot management will remain a priority.

Wind blows and gusts and gales

Quantifying a yield effect from wind can be difficult, but day after day of wind delayed in-crop herbicide applications for many farms. Environment and Climate Change Canada says it was the windiest mid-May to mid-June over the past 30 years, based on data for Winnipeg airport. These high winds were widespread across the continental midwest and returned in August.

For many fields, spraying delays allowed weeds to grow bigger than farmers would normally allow. These weeds took up nutrients and provided some level of crop competition. Weed control that is delayed until after the four-leaf stage of the crop has been shown in many studies to cause yield loss.

Wind at harvest also rolled swaths and caused pod drop and wind-shatter losses for standing crop. While yield loss will have happened on damaged fields, we don’t have an estimate of how much.

CCC agronomy tips: Find scouting tips for flea beetles that take shelter on stems, as well as “Tips on how to spray in the wind” and “Can I spray at night when winds are more calm?” Search for those articles at canolawatch.org.

Flea beetles down but not out

Insects were not a major problem in 2020, except maybe for flea beetles – but even they were not near as bad in 2020 as they were in 2019. However cooler spring temperatures meant that slow emergence left plants more vulnerable. Flea beetles can quickly set back the crop and increase yield loss potential. CCC agronomy specialist Keith Gabert surveyed 31 farmers and agronomists from across the Prairies, and half of them said flea beetle pressure in 2020 was high to very high. For those fields with heavier flea beetle damage, yield loss was estimated at eight per cent, on average. Gabert also discussed insect pressures and management strategies at the Western Forum on Pest Management (WFPM), which he chairs. In October each year, WFPM offers a first opportunity for government and industry researchers, regulators, extension and agronomy staff to summarize the season’s insect and disease results and challenges before entering into a winter extension and planning season.

CCC agronomy tips: Given that flea beetles are a problem somewhere in most years, the CCC shares comprehensive information on how to assess fields and make flea beetle spray decisions based on economic thresholds. Search for “flea beetles” at canolawatch.org or in the insects chapter of canolaencyclopedia.ca.

CCC agronomy director Clint Jurke says sclerotinia stem rot would have been a much larger issue in northwest Saskatchewan if not for most acres being sprayed. He reports that a few unsprayed fields in this region had incidence at 50 per cent, while those sprayed were mostly less than five per cent. Warm, moist soil temperatures in parts of the Prairies in spring may have contributed to an increase in foot and stem rots caused by fusarium and rhizoctonia. Other notable disease factors were a rebound in blackleg incidence in Manitoba after a drop in 2019, and verticillium stripe. The relatively new disease was seen in more areas across the Prairies and may have caused yield loss. (We’re waiting on research to help quantify verticillium stripe losses.) Verticillium likes warm, dry conditions, and tends to be most obvious right at harvest – so the disease had about two months of ideal conditions to take hold.

CCC agronomy tips: Crop rotation remains the key message for management of blackleg, clubroot and verticillium stripe – which is soil-borne, like clubroot. Look for more on verticillium stripe at canolaencyclopedia.ca and the article “How to identify verticillium stripe” at canolawatch.org. Spraying for sclerotinia stem rot is always a difficult decision for farmers, but Jurke says that growers and agronomists are doing a good job following CCC recommendations on how to make the spray decision and ideal timing on when to spray.