On-farm trials are essential for farmers who want their own data on the effectiveness of new products and ideas. Setting up trials and taking them to harvest does requires a little extra work and planning, but the result is more informed decision-making and a better idea of what provides a return on investment – and what doesn’t.

Christi Friesen and her husband, Kelly, do a lot of on-farm trials. Companies often ask them to run trials to compare new products to existing products. Other times the trials go like this: Christi wants to use one fungicide and Kelly wants to use another. So they’ll spray both and flag the strips. At the end of the season, they’ll compare costs, ease of use and yield results to make a better decision on which one to use next time.

They also use everyday complications as a way to run little tests. In one situation, they were trying a new soil active herbicide. Christi Friesen was spraying ahead of the seeder but had a maintenance issue with the sprayer and couldn’t finish the field. They decided to finish seeding anyway. Friesen went back the next day and sprayed the final 60 acres as a post-seeding, pre-emergence treatment. “The difference was night and day,” she says. The undisturbed treatment applied after seeding provided much better results. Good record keeping and a mindset of experimentation allowed them to turn this experience into a learning opportunity.

“A product has to pay for itself and then some. We won’t go full farm with any product unless we can prove that the ROI is there.”

A big part of their decision-making includes a review of past experience. For herbicides, for example, their records include product sprayed, spray timing, weeds present and weed staging. This last detail is important.

The Friesens will often use Conquer and glyphosate as a pre-burn on canola fields. Their notes say the tank mix worked really well on overwintered dandelions but didn’t work that well on thistles that were much more than 10cm tall. “If we have big thistles again, we’ll have to try something else,” she says – which is another opportunity to run a trial.

For organized pesticide trials, the Friesens will replicate strips in the field and often run the trial in at least two fields – one on the north end of the farm and one at the south end. Strips are two sprayer widths, so around 240 feet wide. They’ll take combine passes through the middle of these strips and weigh the results.

The Friesens put an Agrimatics scale in their grain cart last year. “We put most of our grain into storage bags, and with the bags, it can be difficult to estimate how much grain we’ve harvested,” Friesen says. The scale comes with an app that draws up a tonnage and yield ticket for each field. “By weighing each load, we know what we have in each bag for crop insurance and marketing.”

The bonus is they now have an accurate scale for comparing strip trial results. BASF brought its own weigh wagon when harvesting strip trials on the Friesen farm in 2020. This gave them a chance to calibrate their new scale. “It’s really important to have the scale calibrated, and it was bang on,” she says.

Friesen says strip trials and the required flagging, weighing and record keeping all help to improve their profitability. “A product has to pay for itself and then some. We won’t go full farm with any product unless we can prove that the ROI is there.”

Dean Roberts says, “I’m not afraid to try anything, but I’m by no means an early adopter.”

His process of trying a new idea “relies pretty heavily” on his local G-Macs AgTeam. He also checks neighbours’ farms first to see what’s working in his specific area. Western Applied Research Corporation at Scott does a lot of good research, he says, but even though it’s fairly close to Coleville, “the weather is so much different from ours”. So he’ll pay attention to their research results, but he’ll want confirmation that it’ll work on his farm.

“Margins are getting tighter, so every input is carefully considered. We want any investment in the crop to work every time. If it works, we jump in hard.”

He also considers the reputation of the company bringing a new product to market. “Most products from the mainstream companies will work, and they have the brand behind it.”

Once he has a good sense that a new product will provide an economic benefit on his farm, Roberts will spray a whole field and leave untreated strips to do an on-farm comparison.

“If you can’t see a visual difference with the naked eye, the return on investment probably isn’t there,” he says. He wants a difference of at least two bu./ac. to justify an input.

Trying a new pesticide or crop input may be low risk, but Roberts still doesn’t want to spend money on things that don’t work. “Margins are getting tighter, so every input is carefully considered,” he says. “We want any investment in the crop to work every time. If it works, we jump in hard.”

Katelyn Duncan does “a lot of trials” and this willingness to experiment attracts a lot of interest. “We’re open to trying new things and, as a result, we often get products for free,” she says.

It means the Duncans can do a lot more experimenting at a lower cost. In return, the companies get Western Canadian field results for their new products.

Over the past couple of years the Duncans have run micronutrient trials on canola, plant growth regulator trials on durum wheat and various seed trials. They often treat 20- to 40-acre blocks, planting trial acres in an “average spot” in the middle of a field with the untreated crop all around it.

For easy record-keeping, the Duncans set up the trial as a “task” in Climate FieldView, which marks the acres as treated or untreated. The program keeps details on the field sites and allows them to map yield differences at harvest using the combine monitors. “The results are effective for our own learning, but I wouldn’t publish them,” Duncan says.

In the end, many of the products they try don’t provide a clear benefit – but that still justifies the work. By trying a lot of different things, the Duncans are more likely to discover those few treatments that might actually improve the bottom line in their part of southern Saskatchewan.

Chuck Fossay tests canola hybrids by seeding a few strips of a new hybrid in the middle of a field seeded to his old hybrid. Strips are 120 feet wide – up and back with the drill – and the full length of the field. “That gives us a side by side comparison with all the same management,” Fossay says.

He also works with a corn seed company to run hybrid trials on the farm. These trials are done in the middle of Fossay’s own corn fields, so they get the same fertilizer package and the same growing conditions as the field itself. These trials could be done with any crop, providing a good on-farm comparison of performance.

“Everybody has their own way of approaching new technology or products. I’ve heard that 60 or 70 per cent of people don’t make a decision until they’ve see how the early adopters do, and I’d put myself in that large group.”

For pesticides, he’ll usually try new products on a smaller field and then compare results to un-sprayed fields or fields sprayed with his current favourite.

“For seed and pesticides, people tend to be more willing to change because they can run small tests without much of an investment,” Fossay says. “If they like it, they can scale into full production.”

Before that day, he will have researched technical information online, asked dealers about the tool and checked with neighbours who have tried it. “I look for trustworthy sources and a range of opinions,” he says.

Fossay doesn’t consider himself an early adopter. “Everybody has their own way of approaching new technology or products. I’ve heard that 60 or 70 per cent of people don’t make a decision until they’ve see how the early adopters do, and I’d put myself in that large group,” Fossay says. “Once we have done our research, it might take a couple of months to make the decision to switch, or it might take a couple or three years, especially on our farm.” “We usually start small and work our way up.” 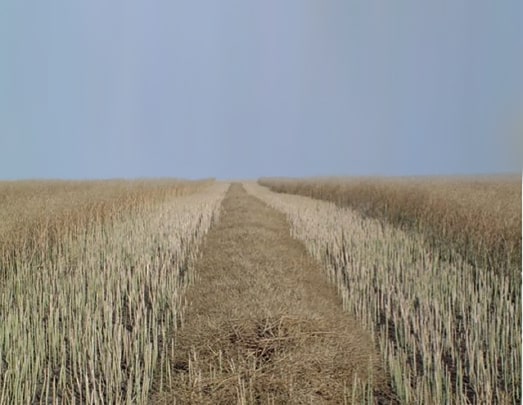 On-farm research can be a powerful tool to test new products or practices under the conditions specific to any one farm or area.

Plan the location of check strips. Think about the products you want to test and plan where you’ll run the trials. Put strips of treated versus untreated crop in a uniform part of the field. If a uniform area is not possible, choose an area of the field that reflects the field as a whole.

Replicate the strips. Try a few untreated and treated strips in the same block (four strips of each are ideal), in different areas of the farm and, ideally, in different years. This increases the confidence that differences (if any) are the result of the treatments, and not because of chance variation caused by differences in weather, soil and other factors.

Control other variables. If comparing a fungicide, for example, make sure the treated and untreated strips are the same variety, seeded the same day with the same tool, and follow the same practices for fertilizer, weed control and harvest. For a fertilizer trial, have detailed soil sample results for the treatment area. This will account for different yields that may result from natural variation. This natural variation is another reason why multiple strips within a relatively uniform part of the field are important. Another quick tip: if applying any type of spray to a test area, spray perpendicular to the direction of seeding to ensure the same amount of wheel tracks run through each strip.

Weigh the results. Harvest all treatments on the same day. Ideally, the strips will be wider than the swather or combine header so the combine can cut through the middle of each strip to avoid edge effects. Combine each row separately and use a weigh wagon to get the most accurate yield data for each strip. Measure the exact length and width of the strips. Make sure the hopper is emptied before starting a new strip.

Keep notes. Record weather conditions, soil moisture, seeding date, pest pressures, harvest date, harvest quality and anything else you can think of. That will help create scenarios where a product may or may not work.

This is a brief overview of the protocols for on-farm trials. For more detailed tips, please go to canolacouncil.org/research.