The canola industry currently contributes over $26 billion annually to Canada’s economy, and faces evolving threats to yield and concerns from major export markets due to blackleg and verticillium stripe.

Blackleg remains a serious disease of canola and can cause significant yield losses, especially in susceptible varieties. In Western Canada,yield losses as high as 50 per cent have been reported in individual fields. In 2017 alone, Canadian canola yield losses to blackleg were estimated at $500 million. However, potentially losing China as a major importer of canola due to blackleg issues would have an annual economic impact of $3.4 billion. For many years, blackleg was effectively managed primarily through variety resistance and longer rotations. However, over the past 10 years researchers have found evidence of virulence changes in the pathogen to defeat major resistance, resulting in a steady increase in disease incidence in previously resistant varieties. Blackleg requires an integrated management strategy utilizing the best agronomic practices, including longer crop rotations and selecting varieties with alternative R-gene packages to minimize yield loss and maintain the effectiveness of genetic resistance.

Verticillium stripe is a new disease to Canada, first found in Manitoba in 2014. Since then, the disease incidence has been gradually increasing in the Canadian Prairies. According to the Canola Council’s agronomy specialists, large numbers of verticillium-infected fields were found in Manitoba and Saskatchewan under hot and dry growing conditions in 2020. While this pathogen has not yet been identified as having any trade implications, there is
a lot to learn about this new disease:  disease incidence, severity, impact and management strategies.

The list of research activities in Cluster Theme 7 include:

These critical research activities being carried out under the Canola Cluster Theme 7 will fill knowledge gaps in blackleg and verticillium stripe management. They will also lead to new genetic resistance and management strategies for more sustainable production, and maintain canola’s economic potential for Canadian producers.

Register for virtual AGM on January 12

SaskCanola’s Annual General Meeting will take place virtually on Tuesday, January 12 at from 9:30 to 10:30 a.m. in conjunction with five other commodity groups in Saskatchewan.

Registration details can be found at cropsphere.com. Registered canola producers are encouraged to sign up early to vote on important issues upcoming in the canola industry.

Resolutions: We encourage people to contact the SaskCanola office at info@saskcanola.com if they would like to bring forward a resolution to be presented at the AGM. We look forward to hearing from our levy payers! 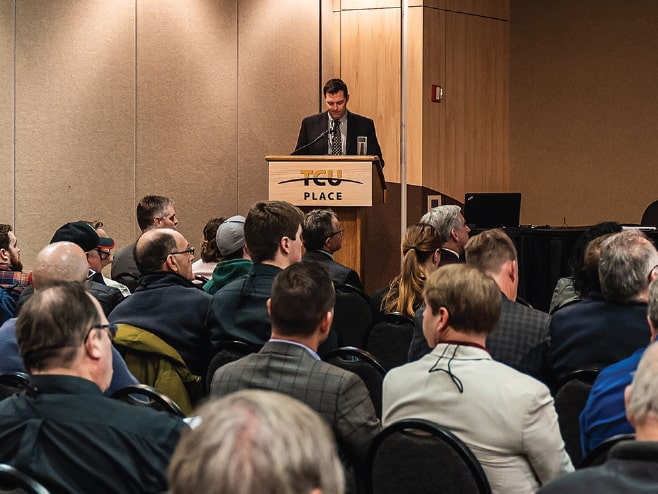 SaskCanola supports the growth of human capacity in our innovative canola sector. The prestigious Dr. Roger Rimmer Award for Excellence in Graduate Research offers $18,000 per year for a maximum of two years to students who are entering or continuing studies in a masters or doctoral program. The goal of the program is to foster innovation within young minds entering the field of canola research.

Elections for the SaskCanola Board of Directors were held during the month of November. There were a total of eight candidates for four positions. Elected were:

Re-elected to a second term was Keith Fournier of Lone Rock.
The newly elected directors will start their four-year term following the SaskCanola Annual General Meeting on January 12. They will be joining four existing directors: Katelyn Duncan of Regina, Charlene Bradley of Stranraer, Bernie McClean of Glaslyn and Lane Stockbrugger of Englefeld.

Thank you to all growers who let their names stand in the election.