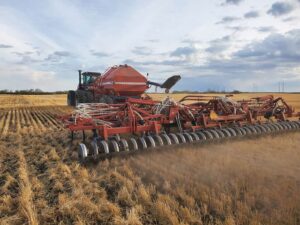 Agriculture has answers to the climate change challenge

SaskCanola has supported research to demonstrate the positive impact of modern agriculture on soil health and the environment. One such study is the Prairie Soil Carbon Balance Project (PSCBP), which analyzed thousands of soil samples over a 15-year period on farms across the province.

The federal government has indicated their intention to increase the carbon tax to $170 per tonne by 2030 to reduce greenhouse gas (GHG) emissions. This tax not only puts the viability of Saskatchewan farms at risk but actually taxes the solution to climate change.

Modern farming practices have changed the game in terms of environmental impact. Over the last 30 years, there has been significant movement towards land management practices that have positively influenced soil quality. Most notably, these include the adoption of direct seeding, reduction in the frequency of summer fallow and use of less intensive soil cultivation equipment.

The proof is in the research

High soil carbon is an indicator of soil health and a measure of carbon dioxide (CO2) removed from the atmosphere. The PSCB study found soil carbon is increasing (reducing GHG levels). Saskatchewan growers using minimum or zero till (direct seeding) are sequestering 8.75 million new tons of CO2 every year on more than 23 million acres of farmland. This is the equivalent of taking 1.83 million cars off the road.

The research also found that soil carbon sequestration does NOT decline over time as previously thought. Instead, carbon continues to accumulate deeper into the soil year after year. This finding is significant because maintaining and increasing soil sinks that sequester large amounts of GHGs is one of the most important long-term solutions to climate change identified by the Kyoto Protocol and the Paris Agreement.

The food that farmers produce is a major contributor to Canadian exports, the economy and an effective strategy for sequestering carbon and removing GHGs from the atmosphere.

In farming, profits are generally narrow with capital tied up in land, equipment and other investments. Any increase to the cost of production directly affects farmers ability to have a profitable business and provide Canadians and others around the world with food. The carbon tax is having a negative impact on farm businesses and farmers’ ability to care for our environment. It significantly increases ALL costs associated with growing food including fuel costs to run equipment, energy for drying grain, costs of crop inputs – and much more.

Ultimately, the federal carbon tax will have the opposite of its intended effect and inhibit the Ag sector’s ability to contribute to improving the environment by driving farms out of business. SaskCanola believes that it penalizes Saskatchewan canola producers who are part of the climate change solution – not the problem.

SaskCanola represents canola growers on issues that impact their farm businesses. Science-based data provides evidence and logic for sound policy development. Contact us at info@saskcanola.com to discuss policy- related issues you feel are important to the future of the canola industry.

SaskCanola strategically invests in various areas of canola research including supporting several projects in integrated pest management, insect pests and beneficial insects. Recently, SaskCanola invested in the new University of Saskatchewan (USask) Insect Research Facility (USIRF) along with other funding partners. The USIRF will be the first of its kind in a western Canadian university and one of only a handful of facilities in the country specifically designed to conduct research on arthropod plant pests and beneficial insects.

“With this new facility, we will really be able to expand our research and teaching programs, and provide accessibility and flexibility for our researchers, students and industry partners,” says Sean Prager, entomologist at the USask College of Agriculture and Bioresources, and head of the new facility.

The independent insect quarantine and rearing facility is also closely linked to USask’s Phytotron Facility, Crop Development Centre, greenhouses and other facilities. Plants such as canola needed for insect rearing projects can be grown in the phytotron and easily transferred to the new lab. The new facility will include state-of-the-art safety equipment, specially engineered building features and specific procedures to meet biosecurity requirements to keep insects and pathogens quarantined. Some of the target pests include aster leafhoppers, swede midge, diamondback moths, beneficial insects and pathogens such as aster yellows, blackleg and others.

Prager and Tyler Wist, research scientist with Agriculture and Agri-Food Canada (AAFC), are collaborating on an aster leafhopper project to try to understand their origin and arrival. “We are trying to determine where the aster leafhoppers arrive from and to be able to predict why some years there are high levels of the aster yellows disease and not in others,” adds Prager. They are researching the role of plant hosts and feeding preference in a project led by Berenice Romero, PhD student.

The design phase for the USIRF is nearing completion and construction is expected to begin in the new year. Once completed and CFIA permits are in place, Prager expects the facility to open in September 2022. Funding for the design and construction of the over $1.5 million USIRF project includes Western Grains Research Foundation, Canada Foundation for Innovation, Saskatchewan Canola Development Commission, Saskatchewan Pulse Growers and Saskatchewan Wheat Development Commission.

The Field Heroes website and resources developed by the Western Grains Research Foundation provides information about beneficial insects and their important role in pest management. A new Pests & Predators Field Guide helps identify crop pests and their management, as well as beneficial insects that help control them and should be protected. Other scouting guides, videos, podcasts and resources are available at: https://fieldheroes.ca.

Pest monitoring programs provide valuable information for tracking pests, supporting management decisions with tools like forecast maps and informing research priorities. Producers in Saskatchewan interested in supporting pest monitoring programs can set up their own pheromone traps during the growing season to get an idea of what’s happening on their farms in exchange for reporting their numbers to the Ministry of Agriculture. Contact Carter Peru at pestsurveys@gov.sk.ca to be added to the program email list, or for more information.