Farmers are not alone in the quest for sustainability. All businesses are looking for ways to keep going in the face of change. This article talks to PepsiCo’s Steven James, cookbook author Claire Tansey and Canadian Centre for Food Integrity CEO John Jamieson to see what sustainability
means to them, and how this relates to canola growers.

While Steven James has spent time in Toronto, New York and most recently Dallas, he grew up in Lacombe, Alberta. He spent a decade in southern Alberta’s Taber and Lethbridge area working for PepsiCo making products like Lays, Doritos and Cheetos. He says growing up amid this western canola range fostered a connection with growers, processors and seed companies.

After leaving Alberta, one of his first assignments in Toronto was to transition PepsiCo Foods Canada to high oleic canola oil. “In doing so, we seized an opportunity to create a locally sourced oil solution while delivering low saturated fat levels and great taste across our biggest brands,” he says. From that point on, canola has been a big part of the company’s food system. “PepsiCo has a significant canola footprint in Canada. In addition to what we source for our five domestic production sites, we export canola oil to our U.S. and Mexico operations,” he says. “If PepsiCo was a country, we would rank as Canada’s third largest market for canola oil, so we are keenly engaged in looking for ways to ensure partners in this supply chain know where we see consumer trends in the years ahead.” (The top two markets are the U.S. and China.)

In 2008, when PepsiCo was transitioning to high oleic canola, the company worked with seed partners, growers and processors on what was required to deliver new low saturated fat solutions to consumers.  “We are now increasing our engagement to communicate an emerging consumer expectation for transparency and confidence in responsible supply chains that are good for the environment and the farmers at their source,” James says. As part of the company’s PepsiCo Positive ambition, PepsiCo will be partnering with growers to deliver five regenerative agriculture outcomes: building soil health and fertility, sequestering carbon and reducing emissions, enhancing watershed health, increasing biodiversity and improving farmer livelihoods.

Over several decades, Canadian canola growers have made strides when it comes to environmental stewardship, which is reflected in the Canola Council of Canada’s sustainability plan. James outlines three areas where PepsiCo aspires to engage with growers, processors, ag tech companies and other canola users in the months ahead.  The first is to share how PepsiCo’s entire supply network, from raw materials to customer’s shelves, is in the spotlight with consumers and stakeholders. “Consumers are increasingly demanding transparency and products they feel confident are responsibly sourced and produced,” James says. Second, PepsiCo aspires to build creative solutions to document good regenerative ag outcomes that exist now, and accurately capture improvements as they are taking place. “We see existing technology playing a role here to simplify data collection,” James says. Third, the company strives to build harmonized approaches across Canadian agriculture and avoid each customer asking for different sustainability solutions by crop from growers and processors.

“We acknowledge that there is hard work ahead. At the same time, we have a ripe opportunity to share with consumers and export markets the safe, secure and sustainable legacy of Canadian agriculture,” James says. “We look forward to this journey together!”

Claire Tansey writes cookbooks, including Dinner, Uncomplicated, and teaches cooking and nutrition classes – mostly online. When asked what sustainability means for her, Tansey says it means changes that we can maintain forever. “For example, if I teach a teenager to cook, I want to give them both the hard skills and soft skills to be able to keep cooking, keep finding it interesting and nourishing, for as long as they live. If they make spaghetti and meatballs once or twice and then never again, then that time was a waste,” she says. “In terms of farming, maybe the same strategy applies. I would hope that sustainable farming practices don’t just aim to have healthier soil, air, water and plants for the next 10 years, but forever, with incremental improvements every year.

Teaching gives her many opportunities to interact directly with home cooks in Canada and the United States. “My audiences are primarily working families who want to make dinner time a little easier, to save money, to eat better and to have quality family time,” Tansey says.

Tansey tells people all the time to use canola oil because it fits with her “uncomplicated” philosophy of making food preparation as easy as possible. “Canola oil is accessible, healthy, neutral tasting and Canadian,” she says.

Yet it generates a lot of feedback and questions. “American viewers don’t know canola at all, for the most part, and Canadians often think there’s something up with canola oil,” Tansey says. She’s not really sure where this comes from. Maybe they read something online once a long time ago. “Bad things you remember, good things you don’t,” she says.

Tansey has been to so many Canola Eat Well events, and has heard how staff such as Jenn Dyck with Manitoba Canola Growers and Lynn Weaver with SaskCanola reply to common questions about genetic modification and pesticide use. At the core of many misunderstandings is the disconnect with how food is grown. “People generally have huge respect for farmers, but they don’t always connect food with farmers,” Tansey says. “They don’t realize that canola oil comes from a natural plant.” 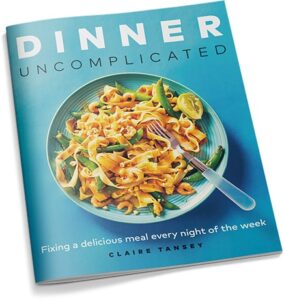 Tansey has a personal appreciation for how this happens. “I have made these connections, but I have a son who has never been to a farm,” she says.

Tansey’s sustainability message comes back to cooking – and teaching people how to cook. “I don’t understand why people don’t know how to cook. It’s not that hard. But people are intimidated. Many don’t even have pots and pans and knives, they don’t know how to shop for groceries,” Tansey says. “If every 15-year-old could learn to cook five simple recipes, the world would be a different place, a better place. It would provide so many benefits to life – yet so many people just say “no” to that.”

“Sustainability is integrity, and integrity is sustainability. They are one in the same, in my mind,” says John Jamieson. “Integrity is doing the right things in as many ways as possible. When the agriculture sector talks about its goals to become more sustainable, this demonstrates to Canadians that we have integrity.”

Jamieson says it’s OK for agriculture to acknowledge areas where it can improve. “The public doesn’t expect perfection, but they do expect progress,” he says.

Jamieson came to the Canadian Centre for Food Integrity (CCFI) with a lot of experience in public perception and on-farm practices. He was the Deputy Minister of Agriculture and Fisheries and the Deputy Minister of Rural and Regional Development in Prince Edward Island. He served as executive director of the Prince Edward Island Federation of Agriculture, and is a professional agrologist and certified nutrient management planner.

CCFI does annual surveys of Canadians to see what they think about the food system. The 2020 consumer survey got feedback on sustainability specifically.

“Sustainability can have many meanings for people,” Jamieson says. People surveyed gave 10 definitions of sustainability. Forty five per cent of people defined it under environmental terms. Some said sustainable agriculture was about supporting local farmers. Some said it was about small farms. Others said it was how farms treat their workers. For Jamieson, sustainability also has to mean financial health. “A farm can’t take the other steps if it’s not economically sustainable.”

The 2021 CCFI consumer survey asked: If you could design the perfect food system, what would it look like? Results pointed to three “big picture” factors:

The CCFI’s role is to use these survey insights to talk about Canada’s food system and its importance to the Canadian economy, to speak to the public as a trusted third party.

Canadians need to know that they’re in good hands, Jamieson says. He says a central message that resonates with Canadians when it comes to their food system is: “It’s good, Canada, we’ve got this.”