At a recent conference and NIAB meeting in England, CCC agronomy specialist Nicole Philp picked up new ideas on the value of fungicides in combination with resistant varieties and the challenge of losing neonicotinoid seed treatment.

In September 2017, my colleague Brittany Hennig and I had the opportunity to go to the British Society of Plant Pathology (BSPP) meeting at the University of Nottingham in England. The conference had a focus on control of disease using genetics (including genetic modification and RNAi), pesticides and biocontrol.

This was an excellent opportunity to hear about diseases in other crops (such as tan spot and septoria in cereals) and learn what technology is being researched. Of particular interest on the agenda were presentations on the impact of new technologies on strategies to increase the durability of disease resistance, on integrated pest management (IPM) strategies, and on the agronomic potential of gene silencing.

The conference had over 160 attendees from more than 15 countries. It was excellent to meet many of the PhD candidates and researchers who conduct the work.

Here are a few of the highlights I took home from the conference:

After the conference, we headed to National Institute of Agricultural Botany (NIAB), a plant science research organization in Cambridge, England. We met with Jane Thomas, who looks after field crop research and pathology, Simon Kightley, who is a researcher focusing on oilseed and pulse crops, and Cheryl Turnbull, who is responsible for the delivery of the winter oilseed rape testing program. We had a few topics in mind to discuss during our time at NIAB, including verticillium stripe, canola variety registration and testing programs, and how the ban of neonicotinoids is affecting oilseed rape producers in England.

The time at NIAB was definitely a highlight of the trip for me. As someone who is interested in variety registration and testing product performance, it was valuable to hear about their comprehensive variety registration system. In order for a variety to be sold in the U.K., it must be on the U.K. National List (NL) or the E.U. Common Catalogue (which includes registered varieties from all members in the U.K.). To be added to this list, varieties must meet two components to the testing program: the variety must be distinct, uniform and stable in performance (DUS test) and show value for cultivation and use (VCU test).

A number of insecticide products that were once registered for use on oilseed rape (OSR) in the U.K. have been banned or become ineffective. Without a seed treatment, U.K. farmers have an increased reliance on foliar insecticides.

Being on the NL is vital to breeders and seed companies. However, this program tends to look at qualities that differ from what farmers would typically look at. This is where the Recommended List testing program comes in. The role of the Recommended List is to provide relevant, independent information to growers, advisors and end users of varieties. It allows growers to make informed decisions on variety choice, and it promotes continual crop improvement. The data is updated annually. New varieties are added if they offer an advantage and old varieties are removed. I would consider this equivalent to our Canola Performance Trials.

We also had an opportunity to discuss how the ban of neonicotinoids is affecting their growers. Of particular concern is the cabbage stem flea beetle (CSFB). Having no seed treatment insecticide options leaves the crop vulnerable during establishment. CSFB damage can range from two to 50 per cent, and even result in total crop loss. In fact, a number of insecticide products that were once registered for use on oilseed rape (OSR) in the U.K. have been banned or become ineffective. Without a seed treatment, U.K. farmers have an increased reliance on foliar insecticides.

Overall, the time in the U.K. was very interesting and educational. Getting to meet some researchers and help connect them to researchers here in Western Canada and talk about some of the canola-focused research here is always an excellent opportunity.

Get timely insect and disease updates and tips 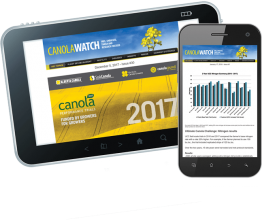 Is that insect a problem in my area? What are the risk factors for sclerotinia? How do I know whether to spray? What does clubroot look like?

Sign up for Canola Watch to get timely updates on insects, diseases and much more. Canola Watch provides observations and agronomy tips based on weekly conversations with the CCC agronomy team, provincial extension staff and many other experts. To sign up for the email, go to canolawatch.org/signup.