Finding co-operators to help with trials is a necessary part of the Ultimate Canola Challenge and Canola Production Trials programs. These four farmers helped with the two programs in 2017, and explain why they did it, the work involved and what they learned from the experience.

“By doing these trials, I get to see the difference between new Bayer varieties and their close competitors…
By doing it on my own dirt, it helps me make better seed decisions for my farm.”

John Guelly had Bayer Demonstration Strip Trials (DSTs) on his farm in 2017 and 2016. The Bayer trials are also included in the Canola Performance Trials field-scale program. All hybrids in Guelly’s plots are clubroot resistant. In 2017, his trials had three Bayer hybrids, one Dekalb and one Canterra. In 2016, the mix was two Bayer, one Canterra and one Pioneer Hi-Bred.

Guelly seeded, swathed and combined the trial fields, and was on hand for plant counts and disease assessment.

“By doing these trials, I get to see the difference between new Bayer varieties and their close competitors. I get to compare them for maturity, harvestability and yield,” Guelly says. “By doing it on my own dirt, it helps me make better seed decisions for my farm.”

“I would like to do these trials every year,” he adds.

In the end, results from his plots were excluded from the official CPT results for 2017 because of hail, but bushels per acre were still in the high 60s.

Being in a high-clubroot area, Guelly is compelled to grow clubroot-resistant (CR) varieties. With good results – even with a little hail – he can use these results to encourage growers in newer clubroot areas to switch to CR varieties. “I can show those who are not growing CR varieties that there’s no yield drag for them.”

Go to canolaperformancetrials.ca for 2017 results and use the database to compare results from 2011 to 2016 as well.

Guelly is on the Alberta Canola board and, as research chair for the organization, is also part of the CPT Governance Committee. “As growers, we have more leverage with the seed companies than organization staff might have. With that leverage, we can help the CPTs get varieties that farmers want,” he says. “Canola farmer organizations are now paying for the whole cost of the CPT programs, and without having the most current varieties that farmers want, CPTs would be far less valuable.”

Gerry Hertz ran an Ultimate Canola Challenge (UCC) nitrogen trial in 2017. Nicole Philp, the Canola Council of Canada agronomy specialist who runs the UCC program, asked if he’d be interested in doing a trial, and he agreed.

“I’m an agronomist and the interest – the seed – for running trials had always been there for me,” Hertz says. “I just needed someone like Nicole to water that seed.”

“At 180 lb./ac., we saw a slight improvement in yield, but I’m not going to spend a dollar on fertilizer to see a dollar gain in yield.”

The objective of the UCC trials in 2017 was to run replicated strips comparing the farmer’s usual N rate to a rate 25-per-cent higher. Hertz ran two trials. His base N rate was 120 lb./ac. For his first trial, he did the 25 per cent increase, seeding four replicated strips with 150 lb./ac of N. Then he did another trial with the test strips being 180 lb./ac. – a 50 per cent increase.

It ended up being a dry year in the area, so Hertz’s check strips using the base 120 lb./ac. fertilizer rate was his most economic rate.

“At 180 lb./ac., we saw a slight improvement in yield, but I’m not going to spend a dollar on fertilizer to see a dollar gain in yield,” he says. “Once my return on investment gets to around $4 in yield for each $1 of fertilizer, I start to think of other inputs that might provide a better return.”

Go to ultimatecanolachallenge.ca for more results from the nitrogen trials and results from boron trials from previous years. You can also get protocols for your own on-farm trials. To participate in 2018, email Nicole Philp at philpn@canolacouncil.org.

Hertz would have more confidence is his results if he could repeat the trials in a year with better moisture. “The check rate was the right rate for 2017, but in a better year that 120 lb./ac. of N might not be maxing out the economic potential for canola on my farm.”

He would also consider a different trial location. The field had a slough near the headlands, which he thinks probably affected results for at least one strip, and he had a little hill in the middle of the trial. “I have autosteer for the seeder and sprayer, but not on the swather,” he says, so he couldn’t eye-ball the flag at the far end. “I had to get a neighbour to stand on the top of the hill and help me swath straight down the middle of each trial.”

For on-farm trials, Hertz recommends a little pre-planning to make sure they get done. A good idea, he says, is to seed the strip-trial fields after all other fields are seeded. “If you intentionally plan it that way, there will be less pressure and you’ll do it right – without the stress.”

Keith Fournier had been increasing his fertilizer rates over the past few years and wonders how much farther he can push nitrogen (N) and still get a response. When the opportunity came along to run a proper trial following Ultimate Canola Challenge protocols, he took it.

“While the trial did require some time and extra money, it was far less costly than it would have been if I had just applied 150 lb./ac. across all my canola acres – and I wouldn’t have learned anything by doing that.”

The UCC program for 2017 compared the farmer’s usual N rate to a rate 25 per cent higher. Strips of each treatment ran side by side and were replicated four times in the field.

Fournier had applied anhydrous ammonia across the whole field in the fall at a rate of 100 lb./ac. of N. In the spring, he put another 20 lb./ac. of N in a blend across the field and 50 lb./ac. in his treatment strips. He put in flags to mark each separate strip.

In the end, Fournier had no overall response to the extra nitrogen. Check plots (at the 120 lb./ac. rate) had both the lowest and highest yields across the replicated strips. Average yields across all treatments was 63 bu./ac.

“While the trial did require some time and extra money, it was far less costly that it would have been if I had just applied 150 lb./ac. across all my canola acres – and I wouldn’t have learned anything by doing that,” Fournier says.

With the good yields he got in 2017, boosting his nitrogen to 150 lb./ac. across the board might have given him the false impression that higher N rates were responsible for his higher yields.

“Having done the trials, I now think we must have some yield-limiting factor other than nitrogen,” Fournier says. After seeing results from Bourgault field trials in 2017, which compared yield results for various rates of phosphorus (P), he thinks inadequate P might be the factor.

With properly-designed trials, he can test that theory on his own farm.

“I’m gung-ho to try more trials in 2018,” he says. He plans to compare strips with his normal P and N rates to strips with higher P and also a third set of strips with a combination of higher P and higher N. He wants to know if increasing P will help canola make use of more available N. “This will require more work, but as farmers, we’re always wondering what we can do to get more yield and more return on investment.”

Doug Brown ran an Ultimate Canola Challenge nitrogen trial in 2017, with help from Tone Ag in St. Pierre. “These trials give me a way to gauge if I’m doing it right in my other fields,” he says.

In line with UCC objectives for 2017, Brown ran a field-scale canola strip trial, with four strips at his intended nitrogen rate and four at a rate 25 per cent higher.

“It was good to learn this on a 10-acre trial instead of on the 900 acres of canola we grow each year.”

Brown followed the UCC protocols for on-farm trials. He had strips randomized so they were U-T-U-T-T-U-U-T instead of U-T-U-T-U-T-U-T. “I had some early challenges with emergence due to high soil moisture at seeding and low spring rainfall,” Brown says. For spraying, he went at a 90-degree angle to the seeding direction, so all plots got the same wheel track disturbance. As per protocol, he also made sure each strip was wider than the swather, and that test swaths were cut through the middle of each strip.

Tone Ag provided a weigh wagon at harvest to get accurate yield measurements for each strip.

“In the end, I didn’t see any benefit to the higher rate. Agronomically, I’m already in the optimum range,” Brown says, adding that he needed a pretty good canola price “just to break even” on the extra nitrogen at the higher rate.

“It was good to learn this on a 10-acre trial instead of on the 900 acres of canola we grow each year,” he says. 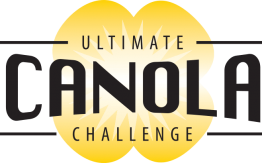 The Ultimate Canola Challenge (UCC) is a program to challenge growers to make better decisions for higher profitability, not just higher yields. It provides protocols for on-farm trials, and it coordinates on-farm trials for specific research objectives.

The UCC research objective for 2016 and 2017 was to compare base nitrogen rates with a rate 25 per cent higher. Over the two years, 15 UCC-coordinated on-farm trials were harvested and met UCC protocol standards. When averaged across all 15 sites, adding 25 per cent more nitrogen did provide a statistically significant yield response, but the increased nitrogen did not always provide an economic return when compared to the base rate.

For more on UCC including protocols for on-farm trials and objectives for 2018, go to ultimatecanolachallenge.ca. To participate in 2018, email Nicole Philp at philpn@canolacouncil.org.