Plant-based protein is a global growth market. With continued innovation, canola can piece together a higher value within human and animal diets.

Proteins are massive molecules. Think of them like completed Lego sets and the pieces are the amino acids. The digestive systems of humans and all other animals take in those proteins as food and break them down into their amino acid pieces. Then the body, like a Lego whiz, uses those pieces to make all kinds of things it needs – muscles, bones, enzymes, hormones and more. Amino acids within protein molecules are the Lego blocks of life.

There are 20 common amino acids, including nine that are considered ‘essential.’ They are essential because they must come from food; the body can’t make them. Lysine, a name often heard in reference to animal feed, is one of the nine essentials. “Lysine also tends to be the first amino acid that is limiting in certain plant-based proteins, such as those derived from cereals,” says Matthew Nosworthy with the College of Pharmacy and Nutrition at the University of Saskatchewan.

Each protein source will contain the 20 common amino acids, but in different amounts. Animal-based foods – like meat, eggs and cheese – contain all nine essential amino acids in sufficient quantity. Plant-based proteins are often limiting in one or more of the essential amino acids, such as lysine, methionine, cysteine or tryptophan, but by mixing protein sources, a plant-based diet can meet the body’s protein needs. This notion is helping to drive consumer interest in plant-based proteins.

The growth potential for plant-based proteins – both for animal feed and for human food directly – is behind the federal government’s investment in Protein Industries Canada (PIC). PIC was picked for funding through the research superclusters program the federal government announced in February 2018.

PIC’s vision, as described at its Thought Leaders Summit in Winnipeg in October 2018, is: “To position Canada globally as a leading source of high-quality plant protein and plant-based co-products, developed in a carbon-neutral production environment, while substantially contributing to Canada’s​economic growth and international trade balance.”

PIC will work with private sector companies to identify and develop opportunities for Canadian crops, especially pulses and canola, to increase their shares in a global plant-based protein market currently dominated by soy.

The global market for protein

Most of those 352 million tonnes of soybeans, which are 80 per cent meal, are fed to livestock to help generate those meat totals. As for Canadian canola meal, a lot of it goes to feed dairy cows. Animal feed will remain the major market for plant-based proteins, but Owen Wagner, speaking at PIC’s Thought Leaders Summit, raises a red flag. The analyst with LMC says protein concentration is declining in both soy and canola meal. He says canola meal could improve its place in the protein market by reversing the protein trend and exploring ways of broadening its appeal from a functionality standpoint. Recognizing this, the Western Canada Canola/Rapeseed Recommending Committee (WCCRRC), which checks all proposed new varieties for quality before they can be registered, has standards in place to stabilize protein content in canola meal.

Aquaculture is another growth market for plant-based proteins as fish farmers look for more sustainable feed sources. Many fish diets are actually made up of fish meal, and finding plant-based proteins to replace fishmeal is allowing for more sustainable growth in aquaculture. Aquaculture is rapidly expanding but the supply of fish meal is static, so new sources of feed protein must be developed. Some species of fish can consume current canola meal in their diet, while other, more high-value species such as salmon and trout require a more concentrated vegetable protein ingredient.

Finally, humans are demanding more plant-based proteins for direct consumption. Pulses have long been the champion of plant-based proteins, with beans, peas, chickpeas and lentils the protein cornerstones of many diets around the world. While pulses are often eaten as is, plant-based protein isolates, which are being added to many processed foods, could be canola’s way into the human food market.

Some plant-based proteins are added to existing foods, such as breakfast cereals and shakes. Some are used in products to replace traditional animal-based protein sources like meat and milk. Gerard Klein Essink, founder and CEO of Bridge2Food, presented on “The Future of Protein” at the PIC Thought Leaders Summit. He gave one example from the Netherlands, where 67 per cent of households purchased plant-based meat in 2018, up from 28 per cent in 2002.

In a report “Canola/Rapeseed Protein: Future Opportunities and Direction,” based on a canola protein workshop at the International Rapeseed Congress (IRC) of 2015, Lisa Campbell and Curtis Rempel of the Canola Council of Canada recognized the growth potential of plant-based proteins, writing: “Population pressures, ecological considerations, and production efficiency underscore the importance of highly bioavailable plant proteins, both for the developed and developing world.”

Nosworthy adds, “Research has suggested that increasing consumption of plant-based protein diets can have a beneficial effect on multiple aspects of human health such as regulation of fat metabolism, reducing risk of type-2 diabetes, and lowering blood pressure.” 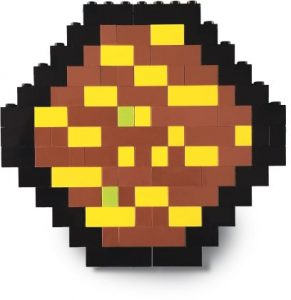 Where does canola have a fit?

Canola meal has 36 per cent crude protein compared to soybean’s 48. This difference has always dragged down canola meal prices, but PIC-inspired innovators may be able to find market niches based on canola meal’s specific protein types.

Janitha Wanasundara, research scientist with Agriculture and Agri-Food Canada in Saskatoon, explains the proteins of brassica seeds (like canola seeds) in great detail in her 44-page report, Proteins of Brassicaceae Oilseeds and Their Potential as a Plant Protein Source. “As a food protein source, Brassicaceae proteins have different essential amino acid levels, digestibility profiles, and associated component profiles than soy protein,” she wrote.

Two proteins, cruciferin and napin, account for most of the protein in canola meal. As Wanasundara described in her report, cruciferin is a large-sized globulin protein closely related to glycinin, which is the major protein in soybeans. Cruciferin content in B. napus seeds can range from 32 to 53 per cent. Napin, an albumin protein, makes up 25 to 45 per cent of the protein in B. napus seeds. These protein subunits have different amino acid compositions and therefore have different functionality.

Canola meal has shown particular value in dairy diets. Various studies have shown that using canola meal instead of soybean meal can increase dairy cow production by one litre per day, and findings released in 2017 by Wisconsin researchers have shown that the increase among early lactation cows is much higher – an average of 4.45 more litres of milk per day. Canola meal can also be used in swine and poultry diets to some extent, but the lower protein percentage and higher fibre content of canola meal has limited its use compared to soymeal. As a result, a significant portion of canola meal produced in Canada goes to dairies, with the U.S. being the biggest market. ProPound canola, which Corteva Agriscience has in development, has a protein content comparable to soybean meal and improved digestibility and lower levels of fibre than standard canola meal. As developments like this become more commercially common, it should broaden the feed market appeal for canola meal.

Protein-rich isolates, almost entirely sourced from soy at this time, are used in a wide range of bakery products, fruit and vegetable juices and flavoured drinks, egg substitutes and processed meat products.

“Canola protein has an opportunity as a high-quality human protein source, and an economic and sustainable source of protein with high bioavailability and digestibility.”

In their report from the IRC meal workshop, Campbell and Rempel wrote: “Canola protein has an opportunity as a high-quality human protein source, and an economic and sustainable source of protein with high bioavailability and digestibility,” then added: “Despite decades of research, several technologies being developed, and products being brought to large-scale production, there are still no commercially available canola protein products.”

Burcon has been working for years on canola protein isolates. The U.S. Food and Drug Administration has granted Burcon’s napin-rich Supertein and cruciferin-rich Puratein isolates ‘generally regarded as safe’ (GRAS) status for food use. Burcon is on the right track to separate napin and cruciferin, based on this comment from Wanasundara’s report: “The technologically valuable functionalities and the nutritional value of cruciferin and napin can be maximized if they are separately utilized.”

This is where PIC comes in

PIC will invest its millions into innovative projects led by the private sector. David Dzisiak, PIC board member and Corteva’s commercial leader for grains and oilseeds, describes the four PIC pillars that will drive its investment decisions.

As Lego has shown, there can be big money in supplying the pieces and the instructions to build great things. The canola industry has an opportunity to turn canola meal’s building blocks – protein amino acids – into its own great growth market.

What's in a canola seed?

Protein. 22 per cent of the whole seed. The CGC’s 10-year average for protein within the canola meal alone is 37.8 per cent, but 36 per cent is the current common industry standard value. Canola protein is almost entirely made up of cruciferin and napin. These two proteins are different enough in their amino acid composition that their value could be maximized if isolated into separate products.

Cellulose, lignin, tannins and non-starch polysaccharides. These are concentrated in the seed coat, and add little nutritional value. Cellulose is fibre, which is generally negative for monogastric (pigs, poultry) feed sources. So is lignin, a woody fibre that requires a lot of carbon and energy to produce and is tough to break down in the gut. University of Calgary plant biologist Marcus Samuel says it would be better if the plant could use that carbon and energy to accumulate more protein. On tannins, Samuel’s Ph.D student Logan Skori says: “Production of tannins within the plant is a defence mechanism that deters herbivory and insect feeding due to its sharp, astringent taste.” As expected, tannins also make the taste of canola meal a little less appealing. “Tannins have also been shown to interfere with enzymes responsible for protein and carbohydrate digestion, ultimately reducing the potential energy within livestock feed,” Skori adds. Reducing cellulose, lignin and tannins would improve meal energy and protein availability. One option, if a genetic solution is not feasible, could be to remove the seed coat before processing. If processing research could demonstrate an economical large-scale method for seed coat removal, this would allow the seed to retain the in-field protective benefits of its coat.

Oligosaccharides, simple sugar (sucrose) and starch. Germinating plants use these energy sources within the seed to boost stress tolerance, including to cold. Reducing these components may affect seed performance in the field. 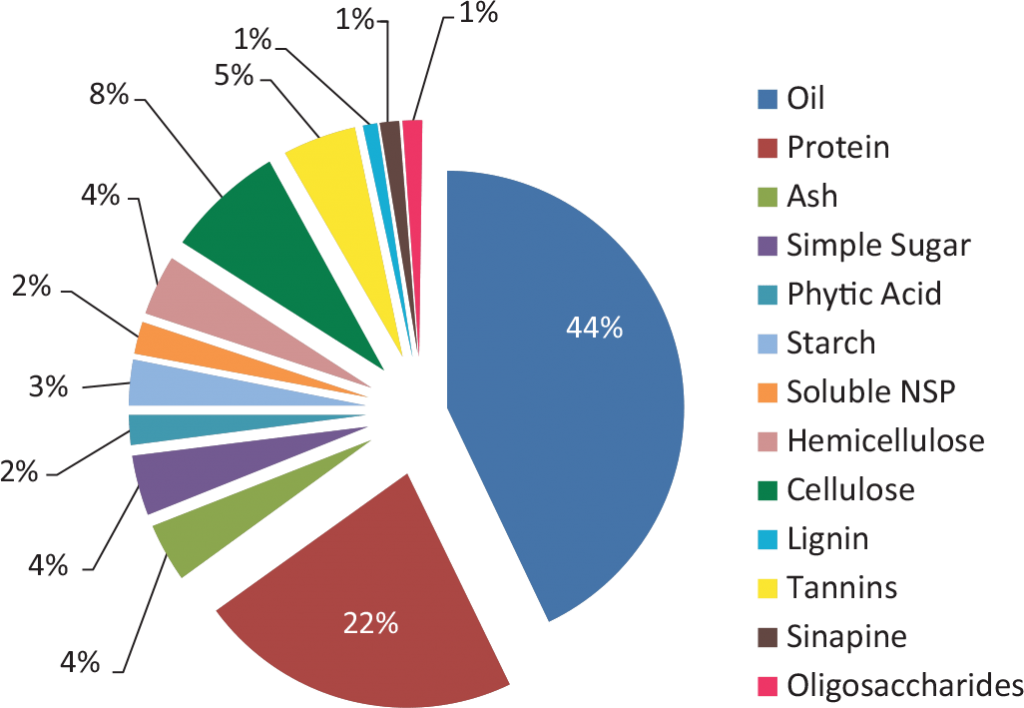