The Canadian canola industry’s Keep It Coming strategic plan, which set the goal of achieving an average yield of 52 bu./ac. to meet global market demand of 26 million tonnes by 2025, is at the halfway point.

At the halfway point of its Keep It Coming 2025 strategic plan, the Canola Council of Canada board stands behind the market and yield goals set on launch day 2014. In support of the goal of 52 bu./ac. average yield to meet global market demand of 26 million tonnes are three priorities – sustainable, reliable supply; differentiated value; and stable and open trade. These priorities help drive industry decisions, including the work plan of CCC staff.

The priority is to meet growing global demand for Canadian canola while increasing the economic and environmental benefits of every acre. With extremes of drought and excess moisture, heavy flea beetle feeding and early snowfall across large parts of Canada’s canola-growing region, 2019 tested the resilience of Canadian canola growers. Through Canola Watch and other resources, the Canola Council provided growers with timely, researched-based advice to maintain their competitive edge and keep canola supply strong.

In such a difficult year, the average canola yield of 40 bu./ac. is a testament to Canadian growers’ capabilities, the resiliency of the crop and the ability of the CCC to bring all partners together to help manage challenges in the field. 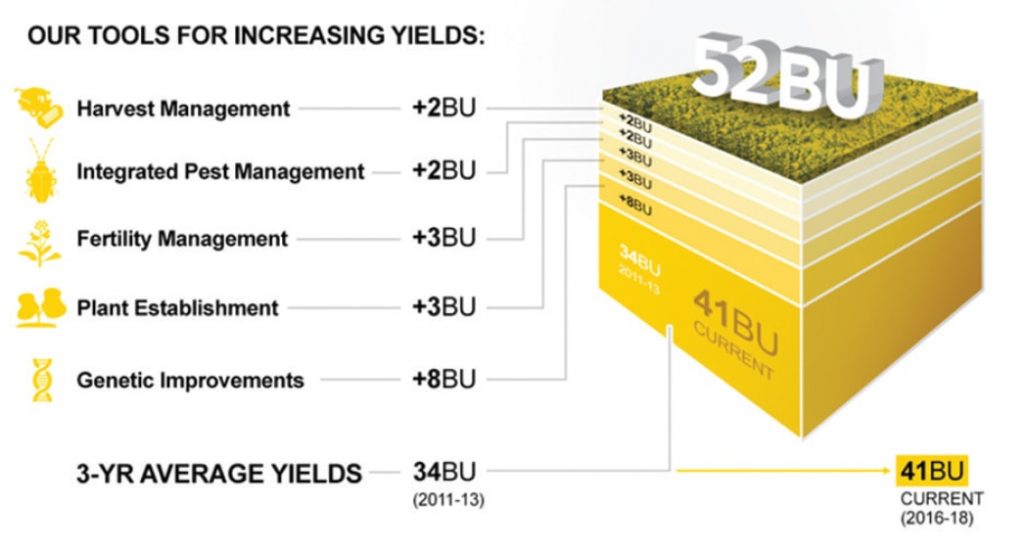 Canadian canola has quality characteristics that set it apart from other oilseeds on the global market. As global vegetable oil demand and meal consumption remain strong, the canola industry continues to demonstrate canola’s value as a healthy oil, premium livestock feed ingredient and biofuels feedstock. To give just one example from 2019, the CCC hosted a visit from Thailand-based C.P. Group, one of the world’s largest feed producers, so the company could learn first-hand about quality assurance in the Canadian canola industry.

The canola industry also looks for ways to build on that competitive advantage through research and development projects. The January 2020 announcement of a meal-focused seed breeding project funded through Protein Industries Canada, Corteva, Bunge and Botaneco is one example of continued investment and confidence in the crop. Jim Everson, president of the Canola Council, attended the announcement and says, “Continued innovation in Canadian canola by enhancing the protein in the seed will help us create more sustainable growth and opportunity for the canola value chain.”

1.3 million tonnes of canola would be used in Canada if the minimum renewable content in diesel was increased to five per cent.

Biofuels are an opportunity to grow a larger, more diversified domestic market. The CCC and Canadian Canola Growers Association (CCGA) are collaborating to urge governments to increase the minimum requirement for renewable content in diesel to five per cent, up from two per cent. The efforts are working. In 2019, Manitoba committed to increasing the renewable content in diesel to five per cent and the Quebec government proposed an increase to four per cent by 2025. The European biofuels market is another opportunity to expand export markets.

An ongoing challenge for Canadian canola, which relies on exports for over 90 per cent of its sales, is to maintain open trade. The market disruption with China, one of our biggest customers, has been difficult. As co-chair of the Canola Working Group, the CCC has been able to focus Ottawa’s attention on the need to resolve the disruption and push for concrete actions to diversify canola markets at home and abroad. CCC’s trade and scientific specialists continued to support technical engagement by the federal government throughout the dispute. At the end of October, key staff were on the ground at the World Trade Organization in Geneva to provide advice as the first face-to-face meeting about the dispute took place between China and Canada.

Meanwhile, an important step in open trade is to make sure Canada continues to deliver canola that meets the standards of our customers. Keep It Clean! initiatives, which promote proper use of pesticides, appropriate management of blackleg and more, help in this effort. See the recommended practices at keepingitclean.ca and read the Keep it Clean! article in this issue.

While the goals of achieving 52 bu./ac. and 26 million tonnes by 2025 are still considered ambitious, they are possible. In the meantime, the Keep It Coming 2025 strategic plan has key pillars that make Canada’s canola industry strive for improvement every day.

—Content for this article is from the Canola Council of Canada 2019 annual report: Partnership with Purpose. The report was included with the mailing of this magazine and is available online at canolacouncil.org.

Overview of the Canola Council of Canada Strategic Plan

All statistics are for 2019 calendar year.