Canola crops tend to yield more when they start off with five to eight plants per square foot, and when seedlings emerge at the same time. Growers can also often save extra management costs for flea beetles, for example, when plants germinate and emerge quickly.

This is the fourth article in a four-part yield series for the Canola Digest 2021-22 season.

A canola plant population of five to eight plants per square foot balances yield potential and economics. This range is based on meta-analysis of hybrid canola studies from Western Canada, which showed that canola crops need a minimum of three to four plants per square foot to maintain yield potential. Plant populations lower than this will almost always have yield loss compared to crops with populations higher than three or four per square foot, the analysis concluded. A target of five to eight allows for some loss so the crop stays at or above the four-plant threshold.

Agronomy recommendations are often based on probabilities: what practice is most likely to achieve the desired outcome? This is important to note because canola crops with a thin stand can still yield fairly well in certain circumstances. Canola is often called a flexible or plastic crop because individual plants can adjust the number and size of branches and pods they produce in response to available moisture, light and nutrients. As a result, canola has a famous ability to compensate for a bad start – as long as it gets a long season and clear sailing along the way.

The challenge with a thin stand is that plants will be bigger, which means more yield coming from side branches and more time before the crop is harvest ready. With a lower seeding rate or lower emergence percentages, canola fields can also be patchy. This further reduces yield potential and increases the management challenge. A crop with bald patches and with plants at different growth stages will be a big challenge to optimize spraying and harvest timing, for example.

Results from an Agriculture and Agri-Food Canada (AAFC) study from 2010-12 found that uniform planting produced 14 percent greater seed yield than non-uniform planting at low- to average-yielding sites when plant density was at or below eight plants per square foot. At high yielding sites, uniform and non-uniform plantings resulted in similar seed yield – as long as plant density was greater than six plants per square foot. The bottom line: If you don’t have many plants, those plants better be spread uniformly across the field.

Because of these agronomy and yield risk factors, the ultimate recommendation for yield and for comparatively less challenging management is to target five to eight plants per square foot and take steps – such as seeding shallow into warmer soils – to provide rapid, even emergence.

While seeding, monitor field conditions and check seeding performance as soil conditions change from field to field or in different areas in the same field. Prepare to adjust seeding equipment to achieve the end goal of a competitive, high-yielding crop.

Do You Have The Right Seeding Rate?

As growers pick up seed this spring, check the seed weights from each seed lot and then run them through the Seeding Rate Calculator at canolacalculator.ca to work out the best seeding rate based on seed size, target stand and estimated emergence percentage. The calculator also provides a cost per acre for that seeding rate.

DID YOU HIT THE TARGET?

AAFC research scientist Julia Leeson surveyed 218 canola fields in Alberta in 2010 and 464 fields Saskatchewan in 2012 to do actual plant counts. Over 40 percent of canola fields surveyed in Alberta in 2010 and over 50 percent of fields surveyed in Saskatchewan in 2012 had overall average stand densities at or below four to five plants per square foot. Basically half the crops did not reach the minimum threshold to maximize yield potential.

The CCC will run Canola Counts again this spring. Please go to canolacounts.ca to enter your counts. 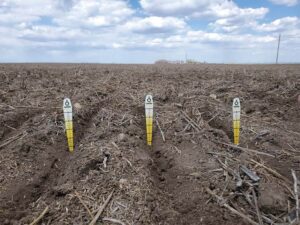 Use the seeding rate tool at canolacalculator.ca to set a seeding rate appropriate for the seed size, then seed at a consistent depth (ideally into warm, moist soils) for a high emergence percentage.

In late 2020, the CCC surveyed 1,000 canola growers to ask about production practices. Of the survey respondents, 75 per cent said they have a target plant stand and the most common target was the recommended five to eight plants per square foot. That is the good news. However, only 55 per cent say they count their plants to check on the actual stand and its uniformity.

To promote counting, the CCC ran a Canola Counts citizen-science program in 2021. Reflective of the challenging spring for some farms, emergence percentages ranged from below 20 per cent to over 90 per cent. Yet, while emergence was low to average, most fields had stands of five to eight plants per square foot. The CCC will run Canola Counts again this spring. Please go to canolacounts.ca to enter your counts.

Taking steps ahead of the seeding season to implement a plant stand strategy and working to improve emergence will pay dividends through the whole growing season. Canola stands with enough plants and that emerge evenly across the whole field have the best chance of realizing yield goals. These stands are also the most efficient at utilizing applied resources and provide the best return on investment.

While seeding, monitor field conditions and check seeding performance as soil conditions change from field to field or in different areas in the same field. Prepare to adjust seeding equipment to achieve the end goal of a competitive high-yielding crop.

Feel free to do your on-farm trials with changes in seed rates, seeding speeds and seed depths to compare how those adjustments affect canola stand establishment on your farm.

Follow up with in-field evaluation when the canola crop is at the two- to four-leaf stage to see how well you did and figure out what adjustments you need to make to improve stand establishment for next time.

—Jason Casselman is an agronomy specialist and plant establishment lead for the Canola Council of Canada. Email casselmanj@canolacouncil.org.

Higher survival rates increase ROI on seed. With steps to improve seed survival, canola growers can stretch the seed supply to cover as many acres as possible while also achieving their target stand. Steps include shallow seed placement at a consistent depth (1/2” to 1” depth) and into warmer soils. For more tips and details, read Richard Kamchen’s article “Get the most out of every seed” in the January 2022 Canola Digest at canoladigest.ca.

Quicker to flower could mean higher yield. A Canola Council of Canada (CCC) phenology experiment in 2021 observed that fields with a shorter vegetative period prior to flowering and a longer duration of flowering had greater yield than those with the opposite, a longer vegetative period prior to flowering and a shorter duration of flowering. Read Nate Ort’s article “How environment influences canola growth stage timing” in the January 2022 Canola Digest at canoladigest.ca.

Why five to eight plants per square foot? To read more about the meta-analysis “Determining the optimum plant density in canola”, search for that title at the Canola Research Hub at canolaresearch.ca.