Canola Week 2021 had over 50 speakers in three days. Each presentation shared valuable information about the Canadian and global canola sector, agronomy challenges, recent research and required innovations. To relive the experience, view the program at canolaweek2021.com and watch the “Canola Week 2021” playlist at youtube.com/canolacouncil. The following articles are a curation of highlights, and they just scratch the surface of Canola Week content.

The shatter ratings tool represents a cultivar’s level of shatter risk on a scale from one to nine, with “1” being high risk of shatter and “9” being low risk. By giving farmers a clear way to assess a cultivar’s risk for shattering, the tool will help them manage risk from harvest loss, plan harvest operations and prioritize fields when selecting seed.

Canola pod shatter is highly related to genetic background. Lars Østergaard, group leader at the John Innes Centre in the U.K., also presented on research developments his team has made on understanding the genetic basis of canola pod shatter. Recent experiments conducted with Arabidopsis, a plant similar to canola and fellow member of the Brassicaceae family, strongly suggest that higher temperatures are inducing the genetic expression that accelerates pod shatter in Arabidopsis. Further experiments are underway to test if this can also be said for other brassica crops, like canola.

The world’s population is expected to reach 10 billion by 2050, which means 2.1 billion more mouths to feed. This increases the need to maximize the utilization of high-protein oilseeds already being mass produced. Canola meal is a shining example of this.

Asiyah Suchak, Masters student at the University of Saskatchewan, has a research project to identify regional differences in nutritional value and characteristics of canola protein.

Suchak’s project compares five canola “strains” or cultivars grown at four sites: Peace River, Alberta; Vermilion, Alberta; Colonsay, Saskatchewan; and Crystal City, Manitoba. She first extracted the oil from the seeds, then processed the canola meal and compared the average crude protein values. In her results, canola from Colonsay had the highest average crude protein levels, Peace River had the lowest, and Vermillion and Crystal City tied in between.

Next, Suchak began extracting protein from the canola meal. While she did not have all samples processed by the time of Canola Week, early results do show differences based on cultivars and location. Crude protein content in canola meal ranged from 72.2 to 80.6 per cent. As a next step, Suchak will check the functionality of protein isolates to see if it changes by region.

Merit is a three-year-old Canadianowned company with a 94,000 square foot facility in Winnipeg. The facility processes canola and peas into protein that can be added to plant-based foods, like non-dairy frozen treats, protein bars and meat alternatives.

Merit is building a fully traceable supply chain from farm to table, where protein can be traced directly back to the farm where the canola or peas were grown. Kraft referenced “partnering with growers” a few times during his presentation. Growers sign production contracts with Merit that require them to follow a set of guidelines, including purchasing certified seed, adherence to specific farm management and storage protocols, and extensive harvest and grain testing to meet certification requirements. All canola processed at Merit is glyphosate free, soy free, gluten free and non-GMO.

Merit’s separation step pulls protein from the canola meal with the help of patented products. Its protein “membrane filtration” step, which removes impurities for improved taste and functionality, is also patented.

Conversations around plant-based protein are only going to grow (pun intended). It will be exciting to see how results from Suchak’s project into protein differences by cultivar and growing location could be applied, and to see what the future has in store for canola protein ingredients in human food products.

The worst drought on record

The 2021 drought was the most widespread and severe single-year drought for the Canadian Prairies over the past 50 years. In his Canola Week presentation, Aston Chipanshi, agroclimate analytical service lead for Agriculture and Agri-Food Canada, showed how the drought covered 94 per cent of the agricultural land in Western Canada, and extreme or exceptional drought covered over 28 per cent of the area.

“Record temperatures in July 2021, unprecedented in intensity and duration, amplified the impact of this drought,” Chipanshi says, with the hottest and driest weather occurring at a critical period for yield – the plants’ reproductive stages.

The result was major yield reduction, including an average canola yield that was about 40 per cent less than the average of the previous five years.

Chipanshi notes, interestingly, that despite the severity of the 2021 drought, overall yields were higher than in previous severe droughts because of improvements in agricultural practices. His list of improved practices includes land management, especially the huge reduction in summer-fallowing to conserve soil moisture, as well as direct seeding, selection of drought-resistant varieties and crop substitution. “In some places, our traditional grains may not be sustainable under prolonged droughts,” he says. He also says insurance products are also good adaptive options. 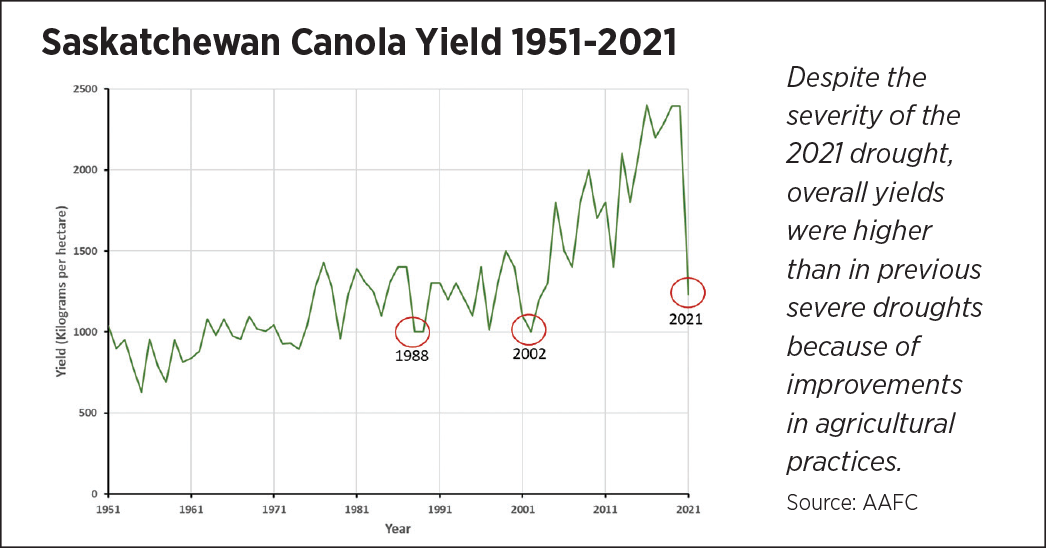 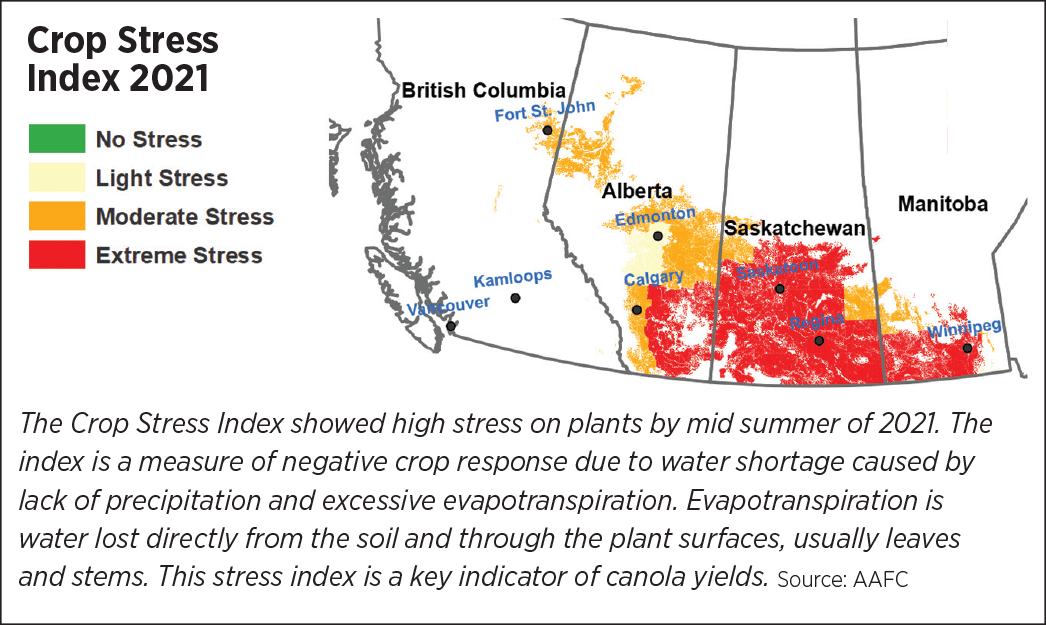 Not everyone responds to diets in the same way. In fact, some people may have a positive reaction, some may have no reaction and some may have a negative reaction to the same nutritional treatment. These different responses may be due to lifestyle, gut bacteria and genetics. Nutrigenetics looks into the third factor, studying how genetic variants affect a person’s response to a nutrient or diet. David Mutch, associate professor in the Department of Human Health and Nutritional Sciences at the University of Guelph, researches nutrigenetics as it relates to canola oil.

Mutch’s research identified a specific marker in a human gene that indicated how a person’s blood sugar level responds to canola oil consumption. The research showed that canola oil as a replacement for high-saturated-fat oils could reduce the risk of diabetes or help manage diabetes in those people with that specific genetic variant – but it might have no benefit in people without that marker.

With Mutch’s research, health care professionals could use genetic tests like this to create personalized nutrition approaches to encourage changes in their patient’s dietary habits and to manage blood glucose levels. People who could truly benefit from a change in dietary oils could be encouraged to consume canola oil more regularly. People who are not likely to benefit from a switch can stay the course.

From a canola perspective, this research will help the CCC refine its canola health message, explaining who can benefit most from a diet that includes canola oil.

Richard Bazinet, professor and Canada research chair in brain lipid metabolism at the University of Toronto, presented on how canola oil can supply essential omega 3 fatty acids for the brain.

The human brain is half fat, half protein. Bazinet says the brain is “very active tissue” that accounts for two per cent of the body’s weight but uses 20 per cent of its energy. Yet, nutritional messages concentrate more on the heart and obesity-related diseases than on brain health. In a review of Canada’s new food guide, Bazinet found 62 mentions each of “heart” and “cardio” but no mention of “brain” or “neuro”.

The brain needs omega 3 fatty acids and these particular fatty acids have to come from our diet; the body can’t synthesize omega 3s from other fats. The brain doesn’t need much. Bazinet says the average brain contains about four grams (4,000 milligrams) of omega 3 docosahexaenoic acid (DHA), and it needs to take up about four milligrams per day of DHA to maintain that level.

Fish oil is a good source of DHA. Canola oil contains a different type of omega 3 called alpha-linolenic acid (ALA). Bazinet says the liver can use ALA to synthesize DHA. While he acknowledges that science is split on this, his evidence supports that this synthesis does happen. Conversion efficiency might be as low as one per cent, but the required amounts are small. A tablespoon of canola oil might be enough — even with low conversion. One tablespoon (15g) of canola oil contains about 1.5 grams of ALA.

Converted at one per cent efficiency, this tablespoon of canola oil can supply 0.015g (15mg) of DHA per day. The brain needs four mg, as Bazinet has shown.

The bottom line is that people need to eat omega 3 fatty acids for brain health, and canola oil is an accessible source. Canola oil is easy to find and easy to use, and it may be more sustainable than fish sources.

Clinton Jurke, Canola Council of Canada agronomy director, shared the five agronomic priorities that will contribute most to the industry goals of 52 bu./ac. average yield and 26 million tonnes of total Canadian canola production by 2025. Here they are:

In November 2021, Federal-Provincial-Territorial ministers of agriculture got together in Guelph, Ontario and produced the “Guelph Statement”. Marco Valicenti, director general for the Innovation Programs Directorate at Agriculture and Agri-Food Canada (AAFC), showed the Guelph Statement in his presentation and said, “This one slide is the key element to the vision and objectives of the next policy framework.”

“We’re at a pivotal point in time,” Valicenti says. “It is extremely imperative that we talk about sustainable development and growth, ensuring that the sector contributes to climate change goals and ensuring that we have stewardship of our lands for future generations.”

Then he adds, “We need to continue to show that research is of strategic value to Canada.” 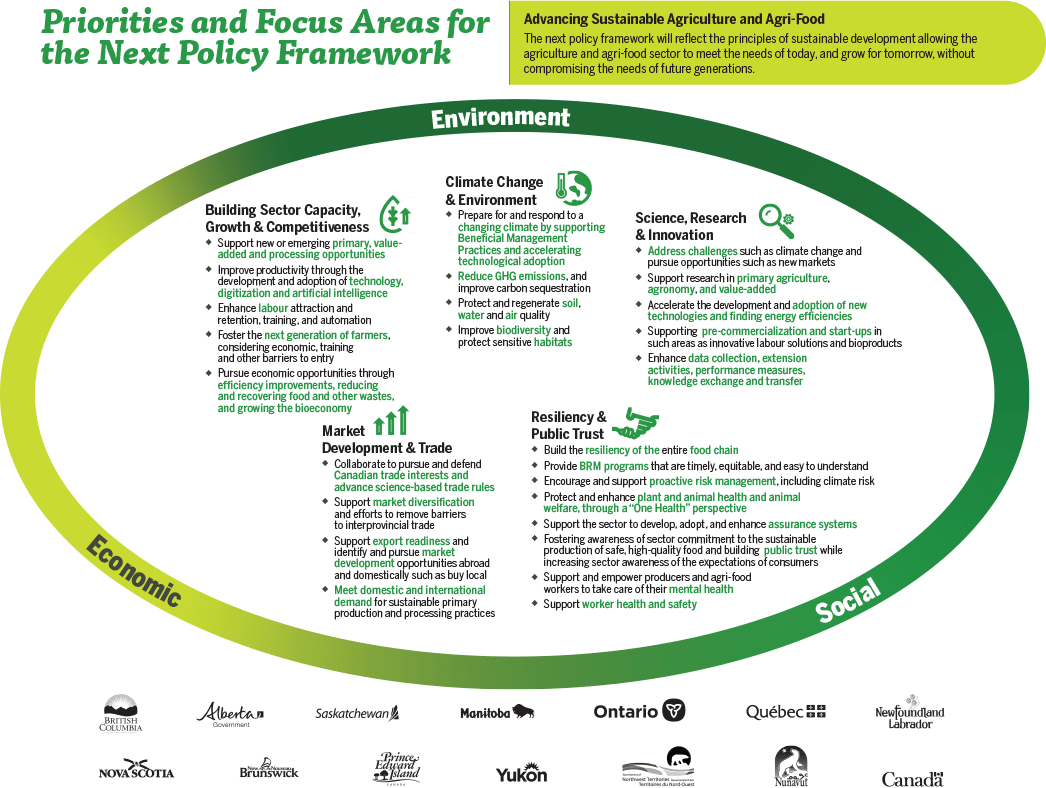 Much more to learn about biologicals

The relationship among plant roots, soil-borne bacterial and fungal microorganisms in the soil is so intertwined that AAFC research scientist Tim Dumonceaux says a plant is best considered as a “holobiont” – consisting of both plant and microbial cells.

Examining these soil microorganisms will reveal biological allies that could manage plant diseases, increase nutrient uptake and more. In a research update session during Canola Week, Dumonceaux gave a summary of his grower-funded project “Canola frequency effects on nutrient turnover and rootmicrobe interactions”.

Previously established, long-term (>10 year) rotations of canola-wheat; canola-pea-barley; and canola only were made available for this study. Dumonceaux showed that the soil fungal biome was consistently affected by crop rotation at all sites, and the effect was greatest in the root and rhizosphere – suggesting a clear connection to the crop grown each year. While the study will not result in any immediate recommendations for crop management, results showed that continuous canola resulted in the dominance of one particular fungal species, Olpidium brassicae. Dumonceaux concluded his Canola Week presentation saying that Olpidium brassicae is a poorly understood root colonizer with a life cycle similar to the clubroot pathogen. It was present in roots at all sites, but was especially dominant in short-rotation canola.

Knowledge of crop rotation effects on the soil and root microbiomes will provide the possibility of culturing potential biological allies within the rhizosphere, adding to the capacity of plants to adapt to agronomic conditions and possibly resist disease.