Canola Performance Trial field tours this past summer featured a large CPT sign with the line ‘Funded by growers for growers’ and logos for the three provincial canola grower organizations and the Canola Council of Canada. That’s because the 2017 CPT program is completely funded by Alberta Canola, SaskCanola and the Manitoba Canola Growers Association, along with contributions from the British Columbia Grain Producers Association. The Canola Council of Canada administers the program on their behalf. CPTs provide valuable, independent, third party canola variety performance data to every canola grower. 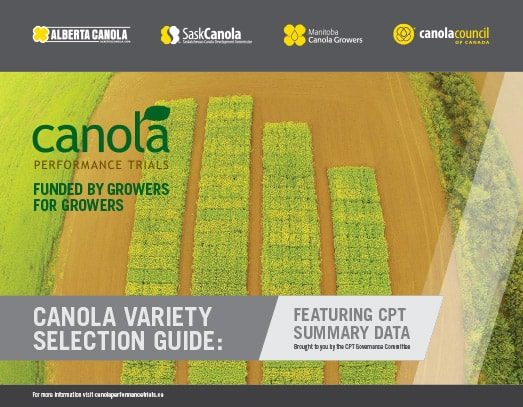 The Canola Variety Selection Guide is designed to assist growers with the variety selection process, with a step-by-step format using 2011 through 2016 small plot and field scale CPT results. Additional seed selection factors addressed (e.g. average growing degree day maps) can be handy reference information for a grower or agronomist when selecting a variety and for industry members to showcase when explaining the suitability of varieties.

To help growers determine which datasets are high-quality results, the Selection Guide includes a section on descriptive values (e.g. sample size and coefficient of variation) and what they mean. It also explains several characteristics that should be considered in order to look at a dataset more critically, such as experimental design, replication, site years and the number of site locations.

The CPT program focuses on producing high-quality small plot and field scale data. It follows several quality assurance steps throughout and after the growing season, including:

QUERIES DISPLAYED IN THE CPT BOOKLET INCLUDE…

Average days to maturity of varieties (and number of sites) in small plot trials in the mid and short season zone.

Average yield (percentage of check) of varieties (and number of sites) in small plot trials in Manitoba,
Saskatchewan, Alberta and British Columbia. This graph shows the Saskatchewan example.


*The varieties listed in most of the above graphs include only those which had >10 sites and were either grown in two of the last three years of CPTs (2014-2016) or were in both 2016 and 2017 trials.
No Clearfield data was included in the field scale graph because no Clearfield varieties were in field scale sites. In the mention of percentage of check, check refers to 5440 or an adjusted value for 5440.

The CPT program is exploring more options to provide value to its audience. Committees are investigating the impact of environmental factors and management practices on canola variety performances in order to provide growers with useful information on selecting and fertilizing canola varieties for increased yield, increased profitability, increased sustainability and reduced production risk.

Finally, new statistical techniques could provide results on a wider range of topics, such as the ‘Best Linear Unbiased Predictor (BLUP)’ technique, which basically uses previous years’ data to model predictions for next year’s performance.

The CPT program is funded by canola growers for canola growers. Check out canolaperformancetrials.ca and see what more it can do for you!