In response to this issue’s article, “7 strategies for success in today’s environment,” we asked four farmers about their biggest challenges to success and their strategies to overcome them. 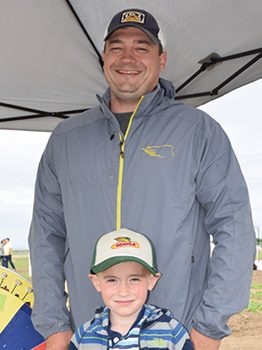 “We’ve been working toward that goal for about five years now and on fields with this longer rotation, it does seem to be proving beneficial for disease prevention,” he says.

Dear is a pedigreed seed grower, so clean fields and rotations are part of the business. He grows wheat, oats, peas and now soybeans for seed. He also grows lentils and canola.

Dear does his own scouting. He attends events such as canolaPALOOZA to help train his eye. “I feel like I have a pretty good handle on what’s going on,” he says. The fact he takes time to do his own scouting is a clear indicator of its importance to him, given that another challenge in agriculture, he says, is finding good labour.

Dear employs a few smaller farmers from the area who split time between his farm and their own. He also has trainees from Europe cycling through on a regular basis. “We have developed a pretty good network with the trainees program,” he says.

“But it is really hard to find someone who wants to work full time on a farm who isn’t already farming themselves,” he says. “As farms get bigger, they will need more of these full-time staff and the labour issue will just get more challenging.” 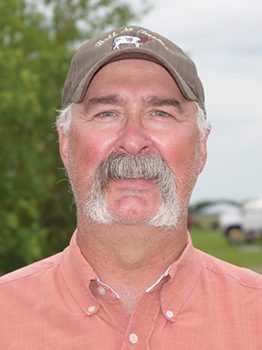 One challenge for Gordon
Moellenbeck is to maintain profitability in the face of advanced threats from weeds and diseases
– clubroot, for example. “We have been pushing canola rotations, but we don’t want to lose canola,” he says.

With crops such as soybeans (which Moellenbeck has been growing for three years,) and grazing corn, he has been able to go back to a four-year rotation.

“We need to get into our heads that preventing the spread of clubroot is
just something we do, like putting on a welding helmet and protective clothing when welding.”
—Gordon Moellenbeck

This is good news for both weeds and diseases.

“With soybeans, we can apply glyphosate in-crop at up to one litre per application twice per season. This really cleans up a lot of land,” he says.

And with significant cases of clubroot found in Saskatchewan this year, it means Saskatchewan canola growers have to be diligent about biosecurity, he says. “With something as simple as a custom harvester, we now have to ask where he and his equipment have travelled.”

Livestock producers have figured out the importance of farm biosecurity to keep diseases out of herds and flocks, he says. Crop producers now need to do the same. “We need to get into our heads that preventing the spread of clubroot is just something we do, like putting on a welding helmet and protective clothing when welding.”

Another challenge is marketing. “This has the biggest impact on profitability,” he says. “It starts with knowing what you have in the bin. How much is No.1 or No.3? What is the dockage? It’s hard to market when you don’t really know what you’re selling.”

A couple years ago, the Moellenbecks had canola of all different grades due to timing issues and variable crop stages within fields. “We had fields range from sample to No.2 and a wide range in between,” he says. “We were up front with what we had and shopped it all around. We were able to sell it all at one grade for a good price.”

“We have so much money to be gained or not gained by selling too soon, not knowing what you have in the bin, and not being willing to shop it around a little bit,” he says. “If you’re not making money off your grain, someone else will be.” 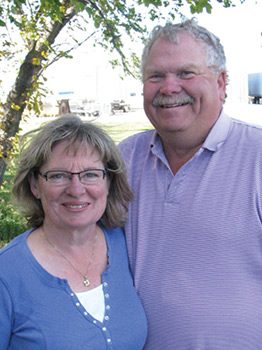 Distance to market is a significant business challenge for Marlene and Graham Caskey, who farm just west of the Alberta-Saskatchewan border 300 km from the nearest airport. This distance adds to the cost of transportation, limits the immediate availability of parts and can make it difficult to attract qualified farm labour.

The closest elevator to the Caskey farm is 16 km away. It sits at the end of the only rail line in the region and has no immediate competition. This has led the Caskeys to look farther afield to sell their grain.

“We now market to six different grain companies, including two in Saskatchewan, and most of them are two hours and two rivers away,” Marlene says.

“Labour is probably the biggest challenge for a modern farm. The ideal person will have a Class 1 driver’s licence, GPS and other tech skills and mechanical aptitude. They also need to accept they’ll be working hard for short periods throughout the year, dictated by weather and crop timing.”
—Marlene Caskey

The rivers are nothing minor. Deep valleys, narrow bridges and big trucks can making hauling grain over rivers a significant challenge.

Crossing the provincial border is another issue. “We need inter-provincial running rights, which we chose not to pursue,” Graham says. “So we hire custom haulers to deliver our grain.”

The Caskeys have a good local equipment dealer, but not all parts are on hand. For that reason, getting machinery going again can take longer in more remote areas.

Then there’s the issue of qualified help. “Labour is probably the biggest challenge for a modern farm. The ideal person will have a Class 1 driver’s licence, GPS and other tech skills and mechanical aptitude,” she says. “They also need to accept they’ll be working hard for short periods throughout the year, dictated by weather and crop timing.”

But the Caskey’s agree, farmers simply have to figure out how to stay profitable amid these challenges because the challenges are not going away. The largest farms don’t exist beside cities anymore, Marlene says, but these largest farms need the most labour, haul the longest distances and run the biggest parts-hungry equipment fleets. 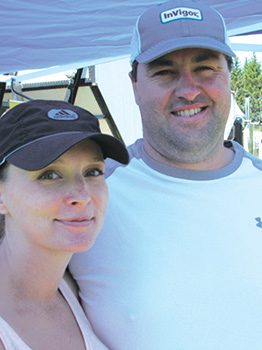 The biggest hurdles Andreas Scheurer faces are drainage (most years), the big jump in equipment and land costs, and now the proposed tax changes for small businesses in Canada.

“We are starting to look into ways of making our land more productive, like variable-rate fertilizer and possibly tile drainage, versus buying more and more land.”
—Andreas Scheurer

“Our area east of Winnipeg, like many other municipalities in Manitoba, has almost completely abandoned municipal ditch maintenance and improvements,” Scheurer says.

He’d like to see his municipality use the Red River Floodway for a drainage outlet.

“The Floodway is only a few miles away and sits empty during the growing season when we could use it most.”

A bigger challenge is cost of production. “These have sky-rocketed in recent years with equipment and land values going through the roof,” he says. “We were fortunate to jump on some land opportunities before prices got out of control. We are starting to look into ways of making our land more productive, like variable-rate fertilizer and possibly tile drainage, versus buying more and more land.”

On top that, tax issues are mounting. Scheurer says their land taxes doubled last year while residential taxes in some areas actually dropped. And now the federal Liberal government has proposed tax reforms that will directly affect farms.

“This is a major problem for me. Our farm is in the succession process and these changes may make it near impossible to transition the farm to the next generation without crippling the operation,” he says. “We can’t just increase the amount of crop we produce to offset these costs. To do so requires massive capital investment in land and equipment which we would no longer have the cash flow to pay for. It threatens the idea of family farms.”