These four moms from China, Mexico, South Korea and India are dedicated canola oil users. Find out why and how they use canola oil. 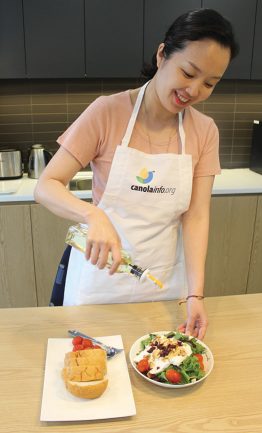 Why do you use canola oil?
I use canola oil for many health and culinary benefits such as high heat tolerance, light texture and neutral taste. Compared to other oils available in Korea, canola oil is the most versatile and cost-effective.

How do you use it?
I use canola oil for stir-fry dishes such as different types of Namool, a Korean traditional vegetable stir-fry. Also, during Korea’s traditional holidays such as New Years and Thanksgiving, I use it a lot to make Jeon and vegetable and squid fries. To make Jeon and fried dishes, you need to make special dough and I used canola oil to make the dough smooth. It is also a good alternative for salad dressing.

What oil did you use for this purpose before you started using canola oil?
I used grape seed oil for stir-fries and fried dishes and olive oil for salads.

How did you find out about canola oil?
I don’t remember exactly when, but there was a time when retail giants conducted a huge promotion to introduce canola oil as a great oil for frying. (Maybe it was around the holiday season of Korean Thanksgiving). I was especially impressed by its high heat tolerance. As many Korean foods are stir-fried or cooked in high temperature, canola oil’s high smoke point caught my eye, and I have been using canola oil since then.

How long have you been using canola oil?
At least 7-8 years.

Is there anything special you would like to share about canola oil?
Most Koreans aren’t aware of the fact that canola oil can be used for baking. As I can cook with less saturated fat while keeping the same flavour quality, canola oil is my first choice when baking as well. I would like to recommend replacing solid fats like butter or lard with canola oil to people who want to bake healthier cakes, cookies, muffins or any other baking. 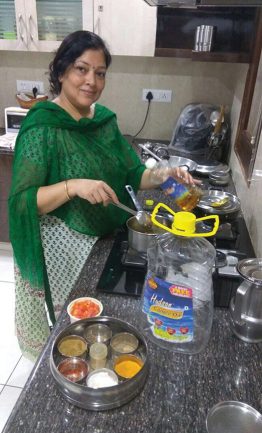 Why do you use canola oil?
Canola oil is healthy and very versatile. It enhances the flavours of the dishes that I cook. It also helps keep my family’s heart health in check.

How do you use it?
I use it for everyday cooking, including Indian preparation of vegetables and lentils as well as for frying. I also use it to brush snacks in my air fryer.

What oil did you use for this purpose before you started using canola oil?
I used to use a combination of sunflower oil and rice bran oil.

Is there anything special you would like to share about canola oil?I
This oil has helped make my home-cooked food healthier without compromising on the traditional taste of Indian recipes.

This is how you write “canola oil” in Chinese characters: 芥 花 油 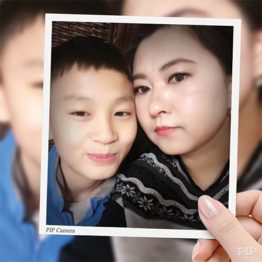 
Why do you use canola oil?
Canola oil has deeply attracted my attention since I first used it in 2016. Canola oil is free of cholesterol and has the least saturated fat. I used to cook desserts with butter on the weekend, but my family never really liked them because they felt the taste was too greasy. Canola oil adds to the delicious nature of baked goods by giving them a moist, soft texture. Replacing solid fats like butter or lard with canola oil allows for a reduction in both total fat and saturated fat to keep us fit.

How do you use it?
My family can’t live without canola oil three meals a day. As canola oil will enhance the natural flavours of food, I like to use it to fry eggs or mix salads in the morning, and also use it to stir fry vegetables, fry food or even fry steaks for lunch and dinner.

What oil did you use for this purpose before you started using canola oil?
As a northerner, we prefer heavier tastes and we love food with rich texture. We used to use peanut oil. As my father has gotten older, he has started suffering from high blood pressure, diabetes and other diseases commonly found in elderly people. I was really concerned about him. Later, I chose canola oil after a recommendation from my friend. At first, my father didn’t like the bland taste, but he later came to like it after his health gradually improved.

How did you find out about canola oil?
I always upload recipes on different cooking platforms, and I found that some big names in cooking often cooked with canola oil, so I got to know it. Besides this, I also got more information from canola oil’s Weibo and WeChat account.

Is there anything special you would like to share about canola oil?
Chinese people prefer heavier tastes, which leads us to suffer from fatty livers, diabetes and other such diseases at a very young age. Canola oil is free of trans fat, low in saturated fat, high in monounsaturated fat, high in omega-3 fat and is also a good source of omega-6 fat. This is why I strongly recommend canola oil. 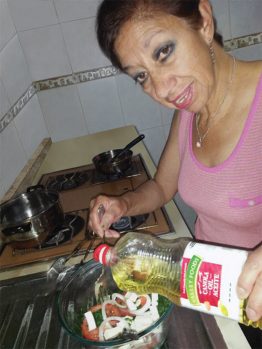 Why do you use canola oil?

My husband has a hard time controlling cholesterol and he was warned by the doctor to look after the fats that we eat, so we began to use canola oil a few years ago for its healthy profile, to reduce the intake of saturated fats and as the source of good fats. I benefit from that too. I’ve been worried about eating healthy all my life and concerned about the health of my family. I’ve always been very careful with the amount of fats I eat. I cook with that conscience and canola oil now helps me to add flavour with fat without damaging our health.

What do you use it for?
Almost everything, but the most I use it for is frying and sautéing.

What oil did you use for this purpose before you started using canola oil?
Safflower oil. Now I know that it has more saturated fats and is not as good as canola for heating up.

How did you find out about canola oil?
My daughter introduced it to me and the cardiologist recommended it to my husband to help control saturated fats. My daughter told me about all the benefits for health. She explained to me the combination of fats and the convenience to use it in every dish.

How long have you been using canola oil?
Almost nine years now.

Is there anything special you would like to share about canola oil?
Only to say that for people like me, always looking after the family’s health, it is great to have this option available for a daily ingredient. Every time I use it, I know I’m doing well.