A look at canola’s progress and potential under the most influential trade agreement in the industry’s history.

As the 1980s came to a close, canola was poised to become one of Canada’s most important export commodities. Canola was earning new fans around the world, and yield-boosting biotech varieties were on the horizon. A growing body of research was confirming the benefits of canola products, and the U.S. Food and Drug Administration had just given its “generally recognized as safe” (GRAS) designation to canola oil.

As these strengths gained steam, Canadian canola would be propelled forward by one more important advantage: the North American Free Trade Agreement (NAFTA).

When NAFTA was signed in 1994, the Canadian canola industry became part of the largest free-trade zone in the world. With a great product and nearly obstacle-free access to prospective customers all over North America, exports of canola would soon soar.

“After two decades, no trade agreement has been more important to our industry’s growth and competitiveness,” says Brian Innes, the Canola Council of Canada’s vice president of government relations.

“Today Canadian canola is imported by many countries all over the world, but about 40 per cent of the canola grown in Canada is processed and consumed right here in the NAFTA trading zone.”

With renegotiation talks now underway, many in the industry are wondering how these trading relationships could be affected by possible changes to NAFTA.

To appreciate what’s at stake, here’s a look back at how the agreement has helped all three countries prosper from canola, and a look ahead at improvements a modernized NAFTA could provide.

A MORE COMPETITIVE OILSEED
By eliminating tariffs, NAFTA made canola a more attractive source of oil and meal for the U.S. and Mexico at a very opportune time.

By the 1980s, some food and feed manufacturers south of the border had tried canola products and liked them, but switching to canola would require them to adjust their recipes, ration formulations and processes. By making canola more affordable and reliable, NAFTA provided the confidence and incentive users needed to make the leap.

Early pressure to eliminate tariffs came from what might seem an unlikely quarter – the first U.S. farmers to grow canola. Curtis Hennings, a farmer from Washington State, remembers how he and other early adopters lobbied for removal of the tariffs on all Canadian canola products entering the U.S.

“It was one of the first things we did after we established the U.S. Canola Association,” Hennings says. “Our trade representative was a little surprised that a commodity organization was asking for tariffs to come off. But we knew that we would only succeed if canola gained broad acceptance in the U.S. food sector – and that meant it needed to become more competitively priced in this country.”

CROSS-BORDER COOPERATION TO BUILD A STRONGER INDUSTRY
Similarly, the Canadian industry understood that the outlook for canola would be more positive on both sides of the border if Hennings and other U.S. growers got off to the right start. Expansion of production in the U.S. would help to further diversify and stabilize supply, which was another important way of making canola a more reliable choice for prospective oilseed buyers.

In this spirit, the Canola Council of Canada extended a helping hand across the border, providing agronomic advice and guiding the group through the formation of the U.S. Canola Association.

More than 60 per cent of the oil and 80 per cent of the meal processed from Canadian canola is imported by our NAFTA partners. In the U.S. alone, the value of canola seed, oil and meal imports from Canada have grown from $620 million to $3.6 billion since the historic accord was signed.

Thirty years later, Hennings can see how cross-border cooperation has paid off in many ways, both on his farm and in his surrounding community. Canola is routinely the top earner among the crops he grows on 8,400 acres near Ritzville, Washington, and the benefits are more than financial. Canola was the rotational crop Hennings needed to break a difficult grassy weed cycle and reduce his herbicide use. The crop’s deep root system also loosens his compacted soil, to the extent that he rarely uses his deep ripper subsoiler.

And while canola production in the U.S. is still small relative to Canada, the U.S. has become an important part of the North American canola value chain. Today Washington State has its own processing plant, which often makes use of Canadian canola in addition to the local harvest. In Warden, a town of 2,000 about 45 minutes from Hennings’ farm, the Viterra cold-press plant employs 38 people and contributes more than $334 million to the state’s economy. The plant is expected to expand as the state’s biofuels industry grows.

The U.S. has also developed its own sources of canola seed for planting, including Hennings’ own company, Spectrum Crop Development. In the early days, U.S. growers were completely dependent on Canada to supply spring canola seed, but now they can buy varieties adapted by local companies for local conditions.

Today Canadian growers sometimes use U.S.-grown canola seed. About 2,000 tonnes are exported from the U.S. to Canada every year. 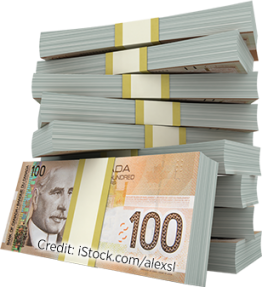 *All amounts expressed in Canadian dollars.

A STRONGER, MORE INTEGRATED ECONOMY
Innes points to the Washington State experience as a real-life example of how NAFTA has encouraged integration of North American supply chains for the benefit of all NAFTA partners.

In addition to eliminating tariffs, NAFTA has helped align regulations and streamline border clearances, clearing the way for ingredients to cross borders easily, sometimes several times, as they undergo the various stages of processing involved in making the final product.

“Now our countries don’t just sell goods to each other, we produce goods together,” Innes says. “Each country can grow what it grows best, and process wherever it makes the most sense.”

In the canola industry, this model has been a significant source of jobs and economic activity in all three NAFTA countries. According to the Canola Council’s latest studies, the total economic benefit of the canola industry in North America now totals CDN$36 billion a year, and more than one-quarter of that impact is felt beyond Canada’s borders.

In the U.S., the impact of canola on the national economy has more than tripled since 2006 to CDN$7.9 billion a year. Almost half of this benefit is generated by the U.S. food manufacturing sector, where canola has become the second most popular oil because of its culinary attributes and heart-healthy qualities. Canola is also making a significant contribution to the U.S. dairy sector, where cows fed canola meal can produce an additional litre of milk per cow per day.

“There isn’t enough canola produced in the U.S. to meet demand, so these parts of the U.S. economy rely on Canada for a stable supply,” Innes said.
The same is true in Mexico, where canola is a highly-valued source of oil and meal but not well suited to local growing conditions. Mexico is consistently one of the top two consumers of Canadian canola seed, and these imports have tripled since NAFTA was created.

As Mexican companies process Canadian canola seed into oil and meal, more than CDN$490 million of economic activity is generated every year. As these products are further processed into food, feed and other products, the total benefit to Mexico grows to CDN$1.5 billion. 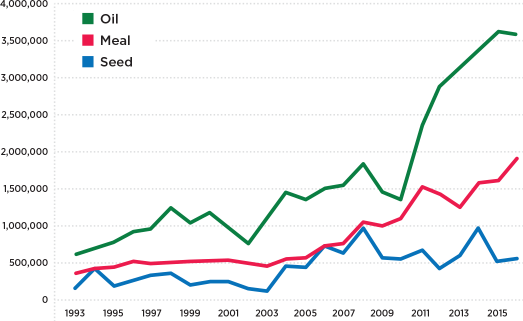 Before NAFTA, the tariff on canola meal was 37 per cent. Canola meal exports to the U.S. rose sharply as this tariff was eliminated, and sales continue to climb today. Oil use is also rising steadily in the U.S. as the food sector responds to health concerns and restrictions related to the use of trans fats. 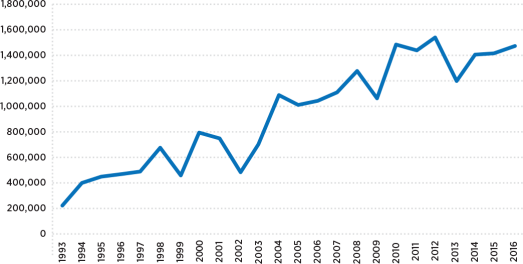 OPPORTUNITIES AHEAD: MODERNIZING NAFTA
With NAFTA under renegotiation, anti-trade sentiments voiced south of the border have been a source of concern in some industries. But Innes feels the canola industry has reason to be optimistic.

Innes says a fresh look at NAFTA can open the door to improving and modernizing some of the less-discussed aspects of this 23-year-old agreement, such as rules of origin.

For example, under the current rules, tariffs are applied when further-processed products like canola-based margarine and shortening cross the U.S. border. Canadian margarine exports are taxed 7.4 per cent at the border and shortening is taxed 8 per cent because these products contain palm oil – a necessary ingredient, but one that is not produced in North America. During the current NAFTA talks, the Canola Council of Canada (CCC) is encouraging negotiators to enable free trade in further processed products like margarine and shortening.

The CCC is also seeking better alignment of regulations for crop protection product approvals, maximum residue limits for pesticides, food and feed safety as well as policies that accommodate a low-level presence of biotech crops.

“Above all, we need policy makers to understand that NAFTA works for the agricultural economy,” Innes says. “Buyers and sellers in all three NAFTA countries need access free of tariffs and non-tariff barriers.”

“It’s hugely important that NAFTA stay in place,” Hennings says. “The trade between these three countries is huge, and on the agriculture side, it’s been great for all of us.”