After a year of lower-than-average yields – including extremely disappointing yields in some areas – everyone wants an increase in 2022. More than that, they want to increase profitability, especially under weather stress. This article will talk about fertilizer practices that can increase profits, reduce risk and potentially increase yields.

This is the second article in a four-part yield series for the Canola Digest 2021-22 season.

Fertilizer is the top input cost for canola production in Canada. After 2021, the fertilizer conversation on many farms could be less about “adding costs” for 2022 and more about “managing risk”. This article will look at a few key ways to manage risk, and explain how those steps could also increase profitability and productivity.

Jenneth Johanson had “half a canola crop” on her farm at Lac du Bonnet, Manitoba in 2021. Immediately after wrapping up canola harvest August 26, Johanson took soil samples because she was going in with fall rye and wanted to know the residual nutrient situation. One field had 122 lb./ac. of nitrogen. Another had 76 lb./ac. “Those numbers are pretty high,” says Johanson, but they were not unexpected.

When farms get half a crop, as many did in 2021, soil tests can save a lot of money next year because they show how much nutrient is left in the soil, bought and paid for. With this information, farmers can make better decisions on how much fertilizer they can remove from their 2022 crop budgets.

November can be a good time to collect soil tests in preparation for spring application. Sampling after soils have cooled to at least 10°C helps reduce nutrient content changes due to microbial activity that may occur prior to seeding next spring. (For more tips, read the article “Use soil tests to take advantage of a challenging year” on page 29 .)

“This would have been a good year to stick with our usual plan, because we would not have applied the other 50 per cent had we waited until bolting.”
—Jenneth Johanson

One way to improve profit per tonne of fertilizer is to make sure more of that fertilizer ends up in the crop, with less lost to weeds, air and water.

One is split application. Johanson will apply about half the soil-test-recommended nitrogen rate at the time of seeding and top-up with the other half in season – if conditions support it.

She started the practice in response to extremely wet years in the 2000s. “I used to put the full rate on at the time of seeding, but then canola would drown out and we’d lose a lot of nitrogen to weeds and denitrification,” she says.

Johanson uses liquid urea ammonium nitrate (UAN) with N-Forced stabilizer, a urease inhibitor similar to Agrotain. She applies the first 50 per cent of UAN just before seeding, dribbling it on with the high-clearance sprayer. She’ll go over it with a light harrow or, if rain is forecast, just leave it. The stabilizer reduces the risk of loss while waiting for that rain to move fertilizer into the soil.

“Then we watch the weather,” she says. If canola gets well established and yield potential looks good, she’ll apply the other 50 per cent of fertilizer just prior to bolting.

In 2021, Johanson modified the practice somewhat because the year started off so promising. She seeded canola the first week of May then, with a forecast for good rain on May long weekend, top-dressing the remaining nitrogen on May 18. The farm got 2.5 to three inches of rain on May 22, which moved fertilizer into the soil. By June 13, the growing season total was 5.5 inches – then it didn’t rain again for 60 days.

“This would have been a good year to stick with our usual plan, because we would not have applied the other 50 per cent had we waited until bolting,” Johanson says. “But you make the best decisions based on information you have at the time.”

Even if 2021 didn’t work out as Johanson planned, Heard says her combination of stabilizers to reduce losses and split applications to align rates with yield potential are two effective ways to reduce risk and improve the return on investment for fertilizer.

“The gold standard,” Heard says, is to band all nutrients at the time of seeding, placing most of it outside the seed row. “You can’t improve on the one-pass systems common in Alberta and Saskatchewan,” he says. But if crop faces fairly regular establishment risks, like frost, flea beetles or excess moisture, the split application is a good option to reduce risk and loss.

Jenneth Johanson follows various 4R practices on her farm at Lac du Bonnet, Manitoba. These include soil sampling. After “half a crop” in 2021, Johanson soil sampled to get a handle on residual nitrogen. One field had 122 lb./ac.

“The beauty of 4R is the flexibility to get the job done,” Heard says. The 4Rs of nutrient management are “Right Source at the Right Rate, Right Time, Right Place”. As growers adopt and then enhance their 4R nutrient management, one advanced practice is variable-rate application.

The Canola Council of Canada surveyed 1,000 canola growers last winter, and results showed that top-yielding growers are more likely to use variable-rate fertilizer application. However, overall usage is still low – with only 11 per cent of farmers surveyed saying they apply at variable rates.

Newer seeding tools are equipped to apply variable rates of fertilizer (and seed), so many farms have the machinery to do it. The bigger job is to create variable-rate maps that guide the machine. Fields maps are divided into management zones, often based on soil characteristics, drainage or elevation. These maps can take some time and practice to get right. In the meantime, farmers have a few simpler methods to get started on variable rate.

Wes Anderson, vice president of agronomy for Croptimistic Technology, says a quick start would be to shut off fertilizer application in saline patches. “These areas often won’t benefit at all from more nutrients and they’re super easy to map out,” he says.

“This winter, I’d encourage farmers at least look at variable-rate options to see how they could improve nutrient use efficiency and profits across the farm.”
—Warren Ward

Another relatively easy step, Anderson says, would be to increase sulphur rates on the hilltops – areas with low organic matter and sandier soils where sulphur deficiency tends to show up. “This is low-hanging fruit,” he says.

John Heard says a logical and economical step is to vary the source, not the rate. “Put NServe treated anhydrous ammonia in those low-landscape positions that tend to be wetter and higher risk for loss, then switch to regular nitrogen for well-drained upper slopes where there are no losses.”

For anyone buying a new seeding tool, Anderson recommends they look at the variable-rate options it provides. This is where 4R will really start to show results, he says. “If all you do is soil sample or just focus on variable-rate nitrogen – not other nutrients, you’re missing out on huge opportunities to get at the true benefits of 4R.”

Warren Ward, agronomy specialist with the Canola Council of Canada, wants to see widespread adoption of 4R practices that at least match the needs of individual fields, if not zones within fields. “If fertilizer blends specific to each field are not logistically possible, apply the blend at different rates to match the yield goal for each field,” Ward says. “This winter, I’d encourage farmers at least look at variable-rate options to see how they could improve nutrient use efficiency and profits across the farm.”

Right rates for all nutrients

Many canola farmers could increase yields with higher fertilizer rates – at least in years with average or better-than-average weather.

The CCC grower survey found that top-yielding canola growers use more fertilizer, especially nitrogen. (See the survey summary article below.) However, survey participants said that one of their biggest barriers to canola profitability is fertilizer cost. Participants also listed drought as a major risk factor, so pushing rates may not be the right move after the experience in 2021.

When it comes to increasing yields, rates are “brute force,” says Heard. He’d rather see increased use of other 4R practices to increase nutrient use efficiency and get more out of the rates farmers are already using.

Another consideration is other yield-limiting nutrition factors. It may not be nitrogen. Anderson noted earlier than sulphur can be a limiting factor, especially on hill tops. Phosphorus has reached critical levels in a lot of fields. And fields showing potassium deficiency symptoms in cereals may soon start to show deficiency symptoms in canola.

This brings us full circle back to soil tests. “Soil tests are the foundation of 4R,” says Ward. “As farmers find ways to reduce losses, increase nutrient use efficiency, apply variable rates and improve yields, a proper set of soil tests will be the foundation for all of those decisions.”

The Canola Council of Canada surveyed 1,000 canola growers during the winter of 2020-21. The survey checked in on a wide range of agronomy and farm management practices. For fertilizer management, the survey found that top-yielding canola growers: 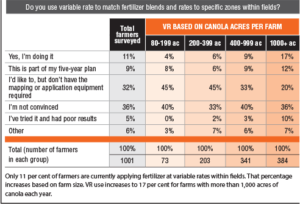 Overall, 45 per cent of top yielders (top 25 per cent) applied 125 lb./ac., or more, of actual nitrogen, while only 14 per cent of low yielders (bottom 25 per cent) applied this amount. John Heard, crop nutrition specialist for Manitoba Agriculture and Resource Development, says that in many cases, this is a “shrewd” move. “Producers with less productive soils realize they can’t simply buy yield with more nitrogen, so they dial rates back.”

On the topic of 4R fertilizer management, the survey found that 25 per cent of growers have a 4R fertilizer management plan while 30 per cent have never heard of 4R. More than half of growers have the same fertilizer plan for each field. On a regional basis, it seems 4R Nutrient Management is most common in the Brown Soil Zone. In that soil zone, 40 per cent of top yielders have a 4R nutrient management plan developed with a certified 4R agronomist, while only 14 per cent among the lowest-yielding group have such a plan.