Key result: Plant breeders have made significant progress towards transfer of blackleg resistance from the B. carinata genome into B. napus canola.

Project title, Principal investigator: “Molecular cytogenetics of blackleg resistance in the Brassica B-genome, and introgression of resistance into B. napus through recurrent backcrossing,” Habibur Rahman, Department of Agricultural, Food and Nutritional Science, University of Alberta

Canola breeding programs have utilized Rlm3 genes for resistance to the common blackleg (Leptosphaeria maculans) pathotypes on the Prairies. However, this resistance was found ineffective against the newly emerging pathotypes, such as PG3, PG4 and PGt. As a result, researchers are working to identify new sources of resistance and incorporate those genes into canola.

At the University of Alberta, the canola breeding program has focused on incorporating disease resistance from Brassica carinata into Brassica napus canola. Among the three Brassica genomes (A, B and C), the A and C genomes, which are present in canola B. napus, are much closer to each other than to the B genome. Because the B genome, which is present in B. carinata, is very distant from the A and C genomes, this makes the introgression of a gene from the B genome into A or C genome of B. napus a challenging task.

The resistance in B. carinata to the more virulent PG4 blackleg pathotype is believed to be under the control of more than one gene. As a result, the introgression of multiple genes from the B to the A/C genome may be needed for PG4-type resistance in B. napus. Identification of the B-genome chromosomes of B. carinata carrying the resistance genes will be a step forward to achieving the goal.

The objectives of this research were:

1. To identify the B-genome chromosome(s) of B. carinata carrying resistance to blackleg PG4-type isolate through molecular cytogenetic study and application of double-haploid (DH) technology, and
2. To transfer this resistance into the A/C genome of B. napus. 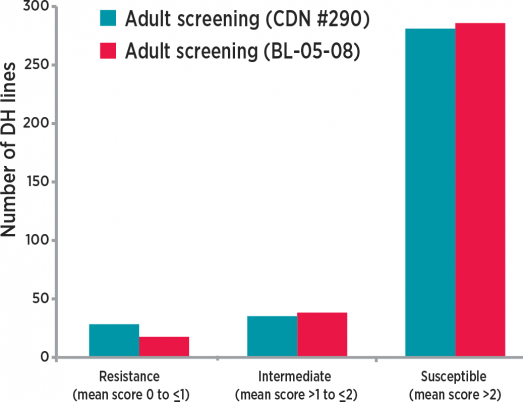 Molecular marker analysis also indicated that some of the lines may lack the B genome chromosomes, but low seed set in these plants indicate that fragments of B chromosome(s) might be present in these plants. These lines are currently being tested in Australia for resistance to this disease. Given the complexity of this research project, the plant breeders made significant progress towards introgression of PG4- and PGt-type resistance from the B genome of B. carinata into B. napus canola.