Genetics will drive a large share of the yield gains needed to get to 52 bu./ac. Genetic traits also reduce pesticide use, increase crop tolerance to disease and improve harvest management – all enhancing the sustainability of canola.

In the Canola Council of Canada’s Keep It Coming 2025 strategic plan, improved canola genetics are expected to provide 8 bu./ac. of the yield gain required to meet the 52 bu./ac. average yield target. This is the largest share, by far. (See the graphic on this page.) Canola growers in Canada have come to expect small yield gains with each new generation of commercial hybrids. They like enhanced disease resistance and harvest management traits. And pretty much every canola acre in Canada is seeded to hybrids with a herbicide-tolerant trait. For all of the demands on them to improve existing traits and add others, canola seed companies, with help from public and private plant breeders, keep delivering.

Here are some of the genetic solutions immediately available to farmers, including tips on how to use and protect those traits: 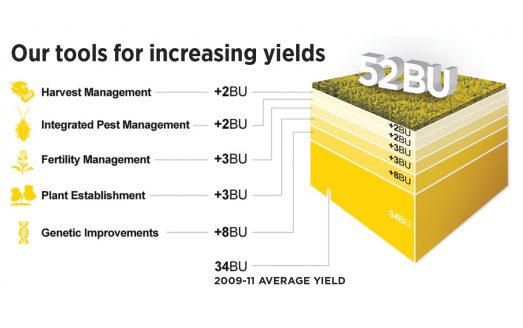 Genetics to reduce herbicide use. Herbicide-tolerance traits that allow for the application of broad-spectrum herbicides to canola crops have reduced the range of products applied to canola and, because these traits greatly improved weed management in canola, reduced pesticide applications across the farm’s whole rotation. Though these traits do meet with increased regulatory scrutiny in Canada and around the world, the potential for advancement in herbicide tolerance and other novel traits to greatly reduce pesticide use could be a real sustainability win for agriculture. A 2015 study by Graham Brookes and Peter Barfoot (see more about their reports on page 19) concluded that biotech canola varieties increased farmers’ yields by up to 12 per cent per hectare from 1996 to 2013. They also concluded that in just one year of growing biotech canola, producers saved one billion kilograms of carbon dioxide from not having to till their fields to manage weeds.

Genetics to reduce disease. Genetic resistance to blackleg and clubroot has been a huge boost to the sustainability of canola in Western Canada. Genetic resistance has proven much better than applied crop protection products at managing these diseases. In 2009, the first clubroot resistance variety was available for producers. In fewer than 10 years, every major canola seed company now offer a clubroot resistant variety, thanks in part to public research – including the recently completed projects described in this magazine. Most canola varieties have full or moderate resistance to blackleg, and our strategies to deploy this trait is improving. With enhanced genetic tools to identify how blackleg-resistance genes stack up to local pathogen populations, farmers can now deploy specific R-genes to match the races in a field (Read more at blackleg.ca.) This is already available for blackleg in Canada and could come soon for clubroot.

Genetics to improve harvest management. Pod-shatter tolerance has lowered the risk for delayed swathing and straight combining of canola. These practices have potential to increase yield by letting more seeds in side branches reach maturity. Straight combining can also reduce time, labour and machinery costs to harvest canola because it eliminates the swathing step. Increased yield and lower costs that these harvest traits provide are both major benefits to canola sustainability.

Baoluo Ma with AAFC Ottawa was the principal investigator in a Canola AgriScience Cluster (GF2) funded study to investigate various canola genotypes for tolerance to heat and drought stress. Ma’s study improved the feasibility of using an electrical measurement method to screen canola lines for root traits that improve response to heat and drought stresses. Ma says the method has the potential to assist plant breeders in selecting genotypes with strong root architecture. The same study also looked at lodging. Ma developed a simulation model to assess lodging, which could be used to develop the appropriate crop management practices for mitigating the risk of lodging and can be applied in breeding programs for selecting genotypes with high yield potential. While these are still in proof-of-concept stages, the results show how new research tools can make it easier for breeders to select for traits that increase canola’s tolerance to environmental stress.