Biodiversity of habitat across the farm can increase populations of bees and beneficials, which can increase yields and provide a natural check on insect populations. Biodiversity through crop rotations can reduce disease severity and expand management options for weeds.

The Canadian canola industry wants to increase production to keep pace with global demand, but the goal also stipulates that canola acres not exceed 22 million per year. At that acreage total, farms can maintain crop rotations necessary for long-term sustainability. The biodiversity that comes with crop rotation can be a valuable part of integrated management of insects, weeds and plant diseases.

In addition to crop rotations, here are a few other effective pest management tools farmers can use to improve profitability and achieve their sustainability goals.

Scout before spraying. Spraying has a cost and farmers want to make sure the pest they’re spraying is actually causing enough crop damage to justify that cost. This ‘economic threshold’ is a key part of integrated pest management, but it requires close scouting and counting. Return on investment for scouting and counting comes when planned sprays don’t have to be applied (lower cost) or when an unexpected threat needs immediate action (protected yield). This is already a well-established practice among Canadian farmers. The Canadian Roundtable for Sustainable Crops’ Metrics Platform found that 99 per cent of Canadian producers always or usually use timely and regular field scouting to assess their crop and, determine economic threshold levels so they can apply pesticides only when and where they are needed. Find out more at sustainablecrops.ca/metrics-platform.

One in four acres

Follow insect thresholds. Established science-based thresholds for many canola insect pests help farmers make better economic and environmental decisions, decreasing the use of prophylactic insecticide applications. The Canola Council of Canada’s Canola Insect Scouting Guide, available for download at canolacouncil.org, provides a quick reference for insect thresholds. Hector Carcamo, research scientist with Agriculture and Agri-Food Canada (AAFC), is upgrading the lygus thresholds first established based on Wise and Lamb’s research paper published in The Canadian Entomologist in 1998. Threshold tables for lygus indicate that if canola is $12 per bushel and spray costs $8 per acre, the threshold at the early pod stage is five lygus adults or late instar nymphs per 10 sweeps. Carcamo’s more recent work found that in moist and high-yield conditions, it could take many more – up to 50 lygus per 10 sweeps at the early pod stage – to cause an economic 2 bu./ac. reduction in yield. Carcamo is also working with University of Manitoba researcher Ale Costamagna to refine the flea beetle threshold.

Know your beneficials. Canola fields are habitat for an incredible diversity of beneficial insects (or ‘field heroes’) such as bees, butterflies, spiders, wasps and beetles. In many cases, these diverse insect groups prey on – or parasitize – insect pests, providing a level of control often exceeding that of chemical means. This was shown in a report by Giberson and Cárcamo, published in Arthropods of Canadian Grasslands in 2014. Even if farmers don’t identify the beneficial species in their fields, waiting to spray until pest numbers reach thresholds can go a long way to limiting pesticide use and protecting these valuable allies. Find out more at fieldheroes.ca.

Reduce weed competition early. Early weed control, either through a pre-seed burnoff or in-crop applications around the two-leaf stage of the crop, is a good way to get more out of the herbicide investment. Farmers can also use narrower rows and higher plant stands to increase crop competition, tank mix herbicides to hit weeds with more than one active ingredient, and collect chaff (then feed or burn it) to reduce the weed seedbank. (For more on the science behind early weed control, read “Control weeds early” – Canola Digest Science Edition 2014, available online at canoladigest.ca.)

Manage diseases with genetic resistance and crop rotation. Growers can use pre-harvest scouting to identify diseases present and then use this information to choose seed with resistance to those diseases. Refined testing will also identify the specific blackleg races present in a field, which can be used to make better blackleg-resistance selections. Read more about R-gene rotation under the Genetic Resistance heading at blackleg.ca. Crop rotation is another valuable integrated approach to disease management, keeping levels low and genetic resistance effective for more years to come.

Maintain habitats. Natural habitat has a benefit to farm profitability, including increased crop production efficiency and yields. Setting aside non-profitable areas (where yields don’t justify inputs) will also improve biodiversity, carbon sequestration and land efficiency. A Western Canadian canola study by Lora Morandin and Mark Winston concluded that yield and profit could be maximized when 30 per cent of land within 750m of field edges was uncultivated. One of the Canola Council of Canada’s sustainability goals is to increase the percentage of farmland that is seeing an increase in its natural habitat.

PSI’s blackleg test has two parts. Part 1 confirms that the sample submitted is in fact blackleg. If BL is confirmed, Part 2 will identify the blackleg races present in the field where the sample was taken. PSI also provides growers the phenotype – how the races in a field may affect the variety resistance in that field – to help guide variety selection. For more on the test and results, go to mbpestlab.ca. 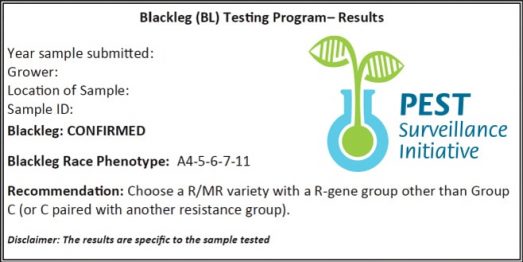 Kochia. PSI Labs also has a test for glyphosate-resistant (GR) kochia. PSI uses DNA methodology developed by Colorado State University to determine both the presence of resistance and the levels of glyphosate tolerance within suspected GR kochia populations. For more on the test and a Manitoba GR kochia map, go to mbpestlab.ca.