A harmonized clubroot map for the Prairies could reduce confusion and allow for meaningful comparisons between regions. This project resulted in a map for Alberta and Saskatchewan, but the goal remains to include Manitoba. 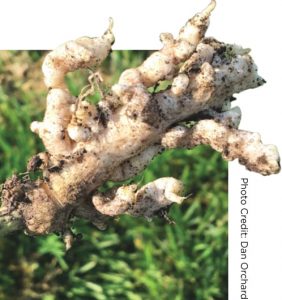 Current maps produced across the three provinces vary widely in what they show and how they show it. This project had three main objectives: (1) to examine the feasibility of a harmonized clubroot map for the Prairies, (2) to determine what such a map will look like, and (3) to communicate findings and recommendations to stakeholders including the Clubroot Steering Committee.

As a first step, Strelkov and colleagues had to select the type of data used to generate the map. These data had to be representative of clubroot distribution, yet not be prohibitively expensive, labour-intensive or time-consuming to collect. The number of confirmed clubroot infestations (fields) was selected as a good basic datatype, noting that additional information (such as pathotype distribution or presence of pathogen DNA) could be added to specific variants of the map as needed.

Different ways of depicting clubroot infestations were compared. One way is to show the total number of infested fields per county/municipality. Another is to show infestations as individual points on a map. Both types of maps are valuable, but in regions where clubroot is not prevalent, there may be privacy concerns associated with the latter.

Various colour schemes were evaluated for depicting the total number of infestations within districts. Since distinct colour categories representing different numbers of confirmed infestations exacerbated the artificial effects of political (county/municipality) borders, Strelkov and his colleagues developed a map that shows infestation level as a continuum, from very light yellow to red, so that a difference of one or two infested fields does not result in the movement of a county into a different colour category.

In addition, they explored two ways to present the clubroot map, specific to the communication format used. The first is a static format best suited to communication via factsheets, handouts, journals, and industry newspapers and magazines. The second type of format is a dynamic or animated version of the static maps, which is better suited for slide presentations and similar types of interactions. Animated maps are very useful in showing a sequence of changes over time (such as the spread of the outbreak), and can serve as important teaching and education tools. Finally, an interactive map was developed for communication via a website. While extremely informative, an interactive map may contain sensitive information that cannot be made public. It is nonetheless valuable for restricted use as a research or management tool.

In the end, Strelkov and his project collaborators met their objectives of examining the feasibility of the map, suggesting the best mapping method, and presenting those findings to the clubroot steering committee. However, there is still no three-province harmonized map.

In his analysis, Strelkov wrote: “Despite the potential benefits of harmonized clubroot maps, the sensitivity related to this disease and its distribution may make their adoption difficult in the near future. This was highlighted in the current study by the difficulty in obtaining data from some provinces. Nonetheless, the recommendations from this work should continue to be utilized until such time that map production is feasible. All provinces should be encouraged to continue record keeping and gathering data for the eventual execution of this map.” It is likely that, as clubroot becomes more widespread in regions where it is presently rare, the sensitivity to sharing clubroot distribution information will decline, allowing publication of harmonized maps.