Blackleg – the silent yield robber
Are you managing this disease effectively?

Blackleg, caused by the fungal pathogen Leptosphaeria maculans (L. maculans), is a serious canola disease that can cause significant yield losses and reduce the sustainability of canola production if it is not managed effectively. Blackleg has been a production challenge in Canada since 1970. In the 1980s, yield losses of up to 50 per cent were reported in individual fields.

This disease has been managed effectively for the past 20 years by combining blackleg resistant varieties, extended crop rotations and sound agronomics. However, over the past 10 years, researchers have found evidence of a steady increase in disease incidence and severity in previously resistant varieties. Growers also reported higher than usual blackleg symptoms in fields grown with resistant hybrids.

The main reasons for higher blackleg disease impact can be attributed to increased canola production under tight crop rotations and the breakdown of resistance (R-genes) by new races of the blackleg pathogen on canola hybrids grown across the Prairies. According to Statistics Canada, canola acres have doubled over the past 20 years. Tighter crop rotations have increased the selection pressure for virulent races of the pathogen, resulting in a loss of resistance to blackleg in current hybrids that are dependent on single resistance genes.

Integrated pest management strategies are the cornerstone of sustainable blackleg management to minimize yield loss and maintain the effectiveness of resistant canola hybrids. The following best management practices are recommended in Western Canada:

The major source of inoculum for L. maculans is previously-infected canola stubble. Extended crop rotation will allow more time for pathogen inoculum levels to decline, which will reduce the incidence and severity of blackleg in fields. Maintaining a minimum break of two years between canola crops is recommended to fight against the breakdown of current blackleg resistance in cultivars and allow effective long-term blackleg disease management.

2. Scout for disease incidence, severity, and hybrid performance across fields

Disease scouting and accurate diagnostics are essential in blackleg management. Knowing disease incidence and severity across a field will allow growers and agronomists to evaluate the effectiveness of current management strategies and indicate the need to select a different control method, if required. Blackleg disease symptoms can be confused with other diseases such as gray stem or verticillium stripe. Successful blackleg disease scouting begins with knowing disease symptoms and depends on timing and proper scouting protocols. For the disease rating scale and detailed scouting protocol, visit blackleg.ca. 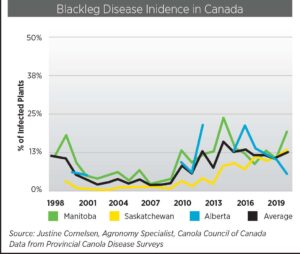 A seed treatment fungicide protects plants from blackleg when they are most susceptible. An early-season foliar fungicide application can help prevent yield losses if applied during the cotyledon to the two-leaf stage. Later foliar application can help reduce the inoculum in the field but is less effective in limiting yield loss. To determine blackleg yield loss, please use the new Blackleg Yield Loss Calculator at canolacouncil.org/calculator.

Volunteer canola and related weeds such as stinkweed, shepherd’s purse, wild mustard, and flixweed are all blackleg hosts. Blackleg can be better managed by controlling these weeds. This will prevent inoculum build-up in the field and improve the benefits from crop rotation.

Why is blackleg race testing necessary?

Canola cultivars with resistant (“R”) ratings for blackleg can still get the disease. Cut stems at harvest to check on the level of blackleg infection. If the disease is present in R cultivars, consider a long break between canola crops and a different R-gene source.

Canadian growers rely on hybrid resistance to effectively manage the blackleg disease. In Canada, all commonly grown varieties of B. napus canola carry moderate to high resistance to L. maculans. However, exclusive reliance on genes to fight against L. maculans is not sustainable due to the increasing number of instances where resistance has failed. 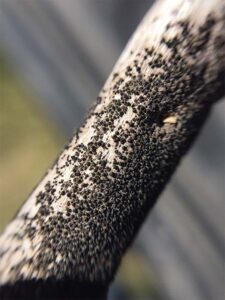 Growing hybrids with the same blackleg resistance genes repeatedly can lead to changes in the race profile of the blackleg pathogen population in a field, enabling it to overcome the resistance deployed in the hybrid. Rotation of cultivars with different resistance sources is recommended as one of the effective strategies to reduce resistance erosion, minimize disease severity, and demonstrate better stewardship in canola fields.

Blackleg can survive for two years, or longer, on infected canola stubble. A minimum break of two years between canola crops is recommended to fight against the breakdown of current blackleg resistance in cultivars and allow effective long-term blackleg disease management.

Another way to prolong the effectiveness of specific resistance genes (R-gene) is by matching the resistant gene present in the hybrid canola with the specific blackleg races within the field. Once this happens, the plant stops the disease from spreading past the site of initial infection.

To effectively manage blackleg, growers and agronomists need to know which blackleg races are present in their fields before selecting a resistant hybrid. Blackleg race testing provides valuable information about the pathogen race identification for a specific field, then growers and agronomists can choose the most effective resistant hybrids for that field.

In 2021, SaskCanola, in collaboration with the Saskatchewan Ministry of Agriculture, offered free blackleg race ID testing to farmers and agronomists in Saskatchewan. During this growing season, agronomists and growers who participated in the blackleg race testing program found it useful for next year’s hybrid selection.

“The blackleg sampling program was so easy for my clients to take advantage of  –  a quick phone call to SaskCanola got them the code they needed, and I was already in their fields to collect the samples as part of my disease \ surveying. The producers’ results from this program are so valuable in helping them manage the disease on their farms,” says Kaeley Kindrachuk, agronomy extension specialist with SaskCanola, who previously worked as a crop extension specialist.

For more details on how to participate in the “blackleg race testing” program, please visit SaskCanola.com.