Dean Roberts always thinks about the people who will eat his crops. “With every decision, I want to be able to explain why I did it and why it’s a good thing,” he says. “Label rates matter. Pre-harvest intervals matter. I want to deliver crops that I would also feed to my family.”

Growing quality food has always been important, but farming with the end user in mind “absolutely has to be done now,” he says. “Food safety is too prevalent in the public mind to not think about it.”

Roberts often has more than four crops on the farm, but his rotation in 2020 was more diverse than usual. He grew canola, flax, peas, lentils, spring wheat, feed barley and, for the first time, fall rye and winter wheat. “This year, I’m going to get an early jump on harvest,” he says. While Roberts got all his crop off last fall, he has had three crops snowed on and lodged over the past five years. With the winter crops, harvest could start in mid-August.

For most of his acres, Roberts prefers to grow crops with more transparency in terms of pricing and grading. For canola, he sticks with regular commercial canola. “We have a lot of market options in our area, so I like the freedom to deliver where I want and when I want,” Roberts says. “My big thing is about keeping market access and market freedom.”

“With every decision, I want to be able to explain why I did it and why it’s a good thing. Label rates matter. Pre-harvest intervals matter. I want to deliver crops that I would also feed to my family.”

Christi Friesen’s approach is to be open-minded about any possibilities. She uses the Cargill MarketSense program, which looks into various crops and possible end users, and helps make decisions that consider the best profitability.

“Growing a specialty canola is definitely something we’re open to. We always look at it every year,” Friesen says. “We pay attention to what the trends are doing. Because if that is what’s going to keep the wheels rolling, then that’s what we have to do. If you don’t have an open mind, you’ll never grow at all.”

Friesen tried green peas this year. “We’ve never grown green peas ever, always yellows,” she says, “But with market trends, it made sense for our farm to grow green peas.”

In 2019, they also tried a 60-acre intercrop of Clearfield 45H76 and Amarillo peas, a later variety that lined up with the canola maturity. “My husband Kelly did a lot of research on it. He wanted to see what the return on investment would be for a crop that got the least amount of inputs.”

They seeded with a paired-row opener, putting peas at 2.5 bu./ac. down the middle and canola at 3 lb./ac. on the sides, with a starter rate of monoammonium phosphate. In the end, the peas yielded 25 bu./ac. and the canola yielded 42 bu./ac. “It worked really well,” Friesen says.

So, while it’s clear they’re open to new crops, Friesen says one challenge up in the Peace region is transportation. Delivery points for speciality canola are not always convenient, so delivery costs can eat into the margins.

“We pay attention to what the trends are doing. Because if that is what’s going to keep the wheels rolling, then that’s what we have to do. If you don’t have an open mind, you’ll never grow at all.”

The Fossay brothers have been growing Clearfield canola under contract through Viterra for the past eight years. Viterra processes the non-GMO canola through its facility at Ste. Agathe, Man., which is about 30 minutes from the Fossay farm.

“Lately, we’ve been growing 800 to 1,000 acres of canola each year, and it has all been Clearfield,” says Chuck Fossay, one of four brothers who farm together. He is also a director with Manitoba Canola Growers.

“The contract pays a premium of 30¢ to $1 per bushel, and the longer we store it, the better the premium,” Fossay says. “When we compare our yields to what neighbours are getting with other hybrids, they’re usually very similar – three bu./ac. plus or minus. With the premium, we feel that we’re receiving at least the same amount of money.”

With the contract, the Fossays also get on-farm pick up.

Fossay says growing non-GMO canola is not about any particular farm philosophy, except maybe a philosophy of profitability. “It’s strictly a marketing opportunity,” he says.

“Typically when we sign up, the contract is for the first 30 bu./ac., but over the past three or four years they’ve been accepting all of the canola we can grow.”

This contract gives them some flexibility to seek other marketing opportunities for anything above the 30 bu./ac., especially since Clearfield can go directly into the regular canola market channel. But they’ve opted to sell it all through the Viterra contract anyway, Fossay says.

Most of their acres over the past few years have been seeded to Pioneer Hi-Bred 47H76, although they did try a couple of new ones this year – including one with increased pod shatter tolerance. “This new hybrid should be able to be straight combined,” Fossay says, but that isn’t a big selling feature for him at this time. “I still prefer to swath,” he says. “Recently, we’ve been able to combine our swathed canola before people with standing canola have been able to start their harvest.” That said, he says they might try straight combining “a couple of acres” in 2020.

The Duncans used to grow Cargill Victory Roundup Ready varieties back when they had a swather, but stopped for a few years waiting for a specialty variety with pod-shatter tolerance.

“We are back again this year, growing InVigor Health L258HPC,” says Katelyn Duncan. She farms with her sister, Mary, who does all of the marketing.

The Duncans grow a lot of canola each year, and being able to seed some acres to a specialty variety is attractive to them. “The market premium for the specialty canola allows us to diversify our canola marketing strategy a little bit,” Duncan says.

While the Duncans don’t know the actual end user, the canola goes to Cargill’s facility at Clavet, Saskatchewan and, as a high-oleic variety, the oil goes into specialty food-use markets.

Agronomically, the Liberty Link option works with their herbicide rotation strategy. “And the kicker is being able to straight cut it because we don’t actually have a swather anymore,” she says. L258HPC has the InVigor pod-shatter reduction trait.

As part of their efforts to maintain agronomic and market diversity, the Duncans also tried an identity-preserved Clearfield soybean variety this year. “We need a longer break for our lentils, so are looking for a crop with a herbicide system that works for us the way lentils do,” she says. This particular soybean variety fit with their system, so they decided to try soybeans again – even though their limited experience with the crop hasn’t been great so far. “We grew soybeans once before, three years ago, and they were a wreck.”

“The market premium for the specialty canola allows us to diversify our canola marketing strategy a little bit.” 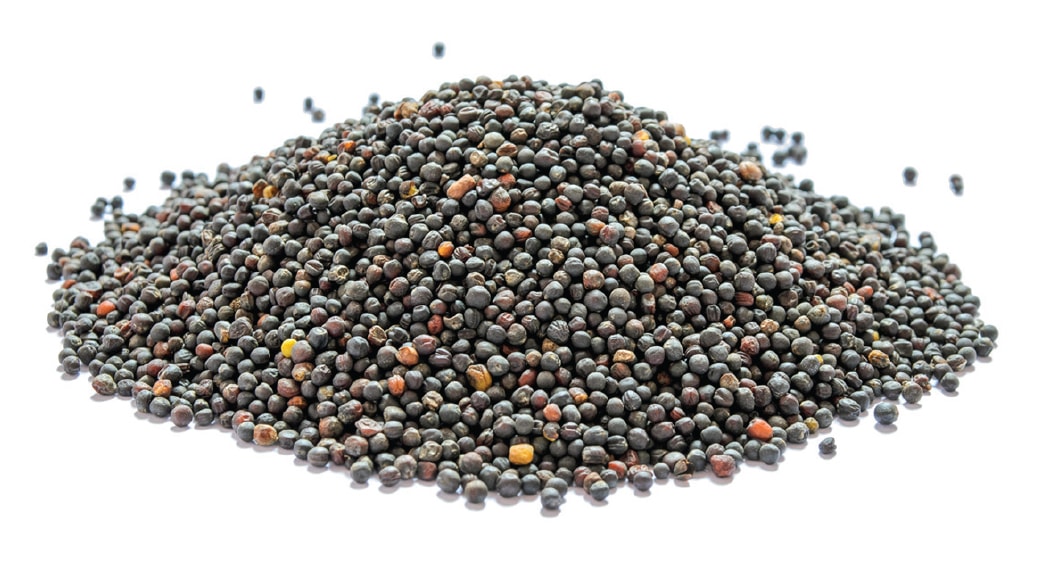