In the introduction to the Pan-Canadian Framework, the federal government’s plan to reduce greenhouse gas (GHG) emissions, it is argued that across the globe humans are seeing increasingly severe weather phenomena. It is becoming more and more apparent that governments need to prepare for changes in climate. There is increasing international pressure to reduce carbon emissions. The goal of the Paris agreement, which Canada signed on to in 2015, is to keep global warming below 2 degrees Celsius, 1.5 degrees Celsius, if possible, in comparison to pre-industrial levels. In March 2021, the Supreme Court of Canada determined that federal carbon pricing is constitutional under the Peace, Order and Good Government clause of the Constitution Act. Carbon pricing is essential to the Pan-Canadian Framework. Canada’s 2030 goal is to reduce emissions to 30 per cent below 2005 levels.

From stakeholder engagements to new funding programs, carbon policy is heating up. The members of Team Alberta (Alberta Canola, Alberta Pulse Growers and the Alberta Wheat and Barley Commissions), have been working with provincial and national groups like the Canola Council of Canada, Canadian Canola Growers Association, and Grain Growers of Canada to make sure government policies reflect the needs of agriculture. Alberta Canola’s Policy Analyst, Aymie Haslam, started started a 4-part summer series, Temperature Check, to inform our farmers about what’s happening with carbon policy.

Alberta’s Technology Innovation Emissions Reduction (TIER) regulation prices GHG emissions and establishes a trading system. Carbon pricing is touted by economists as the most efficient way to reduce GHG emissions while also investing in clean technology innovations. Provinces have the option of using the federal climate policies or using their own, so long as it meets the minimum standards. TIER regulates approximately 60% of Alberta’s emissions. Since the Supreme Court decision, the Government of Alberta is working to create policies that are right for Albertans.

Farmers have sequestered carbon since the 1990s and championed responsible environmental stewardship practices. Use of Beneficial Management Practices will continue to have a significant role in reducing greenhouse gas emissions. Team Alberta’s submission for the Alberta Environment and Parks Stakeholder Engagement emphasized the current efforts made by producers to reduce emissions as well as how the government can support producers in economic growth. Team Alberta also sent a letter commenting on the federal offset credit system. Ideally, credits would be tradeable between provinces, but comes with complications around pricing differences and must be thoroughly analyzed.

Alberta Canola will be hosting 4 Grower Engagement Meetings this winter. The meetings will provide canola farmers in Alberta with the opportunity to learn more about Alberta Canola’s agronomic research programs and active policy files, and to provide feedback and input in these important areas. For more details visit albertacanola.com/GEM

Alberta Canola, in conjunction with other crop sector organizations, recently submitted letters to Hon. Adriana LaGrange, Minister of Education and Hon. Devin Dreeshen, Minister of Agriculture and Forestry, requesting agricultural examples be incorporated in the new Alberta Program of Study for all applicable grades and subjects.

To accomplish this request, the organizations suggested Alberta Education establish an agriculture and natural resources education advisory group. The advisory group would include various agricultural commodity groups, along with Ag for Life and Inside Education to collaborate, advise and provide input on how fact-based agricultural content could be applied to the revised Alberta curriculum.

Alberta’s crop sector believes agriculture should be included in the new school curriculum because agriculture is one of the biggest economic drivers in Alberta. Our future leaders should be well versed in the science and economic drivers behind agriculture; Alberta’s number one renewable resource. Educating future generations about food literacy contributes to a viable agricultural sector, and helps to improve the overall economy, health, and environmental sustainability of natural resources in Alberta’s communities. 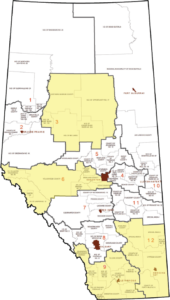 The Alberta Canola Producers Commission is seeking four canola growers to serve as directors on the board of directors for a three-year term. This year, nominations for directors are being accepted for regions 3, 6, 9, and 12. New director terms will begin following Alberta Canola’s Annual General Meeting in January of 2022.

Alberta Canola divides Alberta into 12 regions, with each region electing a producer director to represent the canola farmers within that region. The board of directors meets quarterly and is guided in decision making by five committees that include board members and staff:

Who Can Become a Director?

Anyone who has paid a service charge on canola to Alberta Canola since August 1, 2019 is an eligible producer and can stand as a director. Eligible producers can be individuals or represent a corporation, partnership or organization. To be nominated, eligible producers must grow canola within the defined region but do not have to reside within it.

Nominations for the position of director must be filed at the Alberta Canola office on or before October 29, 2021 at 4:00 p.m.

For complete details on Alberta Canola’s regions, the roles of directors or to obtain a nomination package, visit albertacanola.com/elections or contact Alberta Canola’s General Manager Ward Toma at 780-454-0844.