The Canadian canola industry’s strategic goal is to achieve 26 million tonnes of canola production nationally by 2025 and to increase the average yield to 52 bushels per acre through better agronomy, breeding programs and grower management practices.

In spring 2021, several companies released plans to substantially increase Saskatchewan’s canola crush capacity with goal dates for completion in 2024. Richardson International announced that it will double the crush capacity at its Yorkton facility to 2.2 million tonnes of canola seed annually. Cargill announced it will build a new plant in Regina with the capacity to crush one million tonnes a year. And Viterra shared plans for a canola crush facility in Regina to create another 2.5 million tonnes of capacity.

These three announcements equate an additional 5.7 million tonnes of crush capacity a year. In addition, these announcements change the canola landscape for growers throughout land-locked Saskatchewan. The Prairie province has traditionally been underrepresented when it comes to canola processing capacity, combined with its geographic location far away from ports.

In January 2022, Federated Co-operative Limited (FCL) announced a joint venture with AGT Food and Ingredients Inc. to construct a canola crush facility to supply approximately 50 per cent of the feedstock required for a 15,000-barrel-per-day renewable diesel plant in the Regina area.

In June 2022, Ceres Global Ag Corp. cancelled its plans to build a crush plant due to rising interest rates and other economic factors. The Ceres plant was projected to process 1.1 million tonnes of canola annually in Northgate (south of Regina and very close to the U.S. border).

“The renewable fuel market is the biggest driver of this planned increase in crush capacity and supports value-added investments in our province. Producing more canola oil allows Saskatchewan to focus on more stable domestic markets, in comparison to export markets that buy more seed. That said, there continues to be strong demand for canola as food and feed around the world, especially with cooking oil shortages as a result of the war in Ukraine,” says Dale Leftwich, SaskCanola’s policy manager.

The city of Regina is an appealing location to build canola crush facilities for two main reasons – one reason is that Saskatchewan is the biggest canola producing province in Canada. The other reason is the transportation access provided by an intersection of CN and CP rail lines.

“The federal government is committed to the Clean Fuel Standard and to reducing carbon emissions from all fuels by 30 million tonnes in 2030. Along with the environmental benefits, using more canola oil domestically is a big opportunity to increase value-added processing and diversify the markets that we sell to. The larger crush capacity will benefit canola farmers located furthest away from ports most,” concludes Leftwich.

Call for Board nominations

On July 4, SaskCanola opened nominations to fill four positions on our eight-member Board of Directors. The successful candidates are elected by Saskatchewan’s levy-paying canola producers. Four-year board terms begin in January 2023.

We encourage Saskatchewan canola producers to consider this opportunity to guide investments in research, influence government policy, inform consumers and expand our markets. Ideally, a board nominee is one of the primary decision-makers on a Saskatchewan farm.

A board nominee must be a registered producer – a producer who has sold canola in either of the previous two crop years (August 1, 2020 to July 31, 2022) and who has not requested a levy refund in the past year. An individual appointed to represent a corporation is considered an eligible producer. Other requirements include submitting a biography and supporting signatures from five registered canola producers.

SaskCanola advocates for producers on issues related to market access and development, as well as initiatives that improve your ability to operate effectively and profitably. Collaboration with other canola organizations enables SaskCanola to represent growers’ interests on national and international issues, and on policies that impact overall farm production in Canada.

If you would like to play an important role in the canola industry, now is the time to get involved. Directors’ responsibilities include five board meetings each year, appointments to external industry-related boards as well as other opportunities to represent SaskCanola. Directors receive a per diem t compensate for their time, and travel expenses for meetings and events
are reimbursed.

A nomination package is available to download at saskcanola.com/governance-regulations or by calling SaskCanola at 306-975-0262 to request a package. All applications must be received no later than 12:00 noon on Friday October 14, 2022. 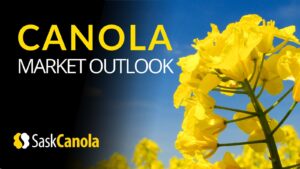 Available on the saskcanola.com homepage, Canola Market Outlook is prepared by market analyst Marlene Boersch of Mercantile Consulting Venture Inc. Boersch has been working in the agriculture industry since earning her master’s degree in agricultural economics from the University of Saskatchewan. She has traded and exported Canadian crops internationally for 20 years.

Each Canola Market Outlook highlights key points for the week, the oilseed market backdrop, the current market situation and other topics of interest. Keep up-to-date with domestic and global markets so you can make informed decisions when marketing your crop.