I’ve seen some interest in the content from this article I wrote in September 2015. These old articles are trapped in PDFs, so are not easy to share, so I’m reposting it here. 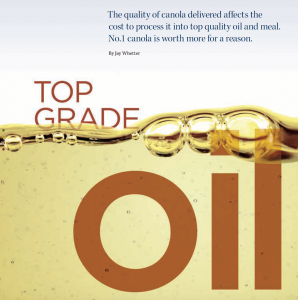 Green seed, heated seed, moisture and dockage all add costs to canola processing, which is why seed delivered with high amounts of any of these factors will fetch a lower price. The bottom line is that No.1 canola with low dockage moves through crushing plants more efficiently.

Green canola seed usually has issues other than just high chlorophyll levels. Canola delivered with high levels of green seed was probably swathed immature or was frozen before it had a chance to fully cure. Therefore canola with high green seed content also tends to have smaller seeds, more damaged seeds and a lower overall oil content per tonne of seed delivered.

High amounts of green chlorophyll in the seed also increase the processing cost because that chlorophyll must be removed to produce the light-coloured oil customers expect. Processors use a clay filtration process to remove chlorophyll. Natural clay particles — “Fuller’s earth” or “montmorillonite clay” used specifically for their high adsorption qualities — are added to the oil. Interestingly, these same clays are used to clarify wine. Chlorophyll molecules bond with the clay particles. The clay is then filtered, taking the chlorophyll with it. Canola oil with higher chlorophyll content will require more clay and possibly more passes with the clay, adding to the cost required to clarify the oil.

“All canola oil gets the clay treatment, but the more chlorophyll, the more clay and cost required for that step,” says Dave Thiessen, edible oils facility manager with Bunge in Altona, MB. Adel Ghabour, quality assurance manager with Richardson Oilseed in Lethbridge, AB, adds that the more clay they have to use to remove colour, the more oil they lose in the process. “Oil is trapped within gaps in the clay, and that oil is not recovered unless the clay goes back through the extractor,” he says.

Canola seed damaged in storage by heating does a number of things to degrade quality. Heating will burn off oil, so there is less oil per tonne of seed. Heating also changes the colour of the oil and increases free fatty acid content. For these reasons, processing plants tend to get very picky about how much they’ll take.

Processors can handle low levels of heated seed, but it still adds cost. Heating will “set” the natural red colour pigments in canola. All canola oil contains some red pigments, which are removed with the same clay process that removes the green chlorophyll molecules. “Red colour set in by heating is very difficult to remove,” Thiessen says. “Deodorizers can’t remove it, and we end up with darker oil in the end.”

Free fatty acids are found in all canola. Good quality new canola seeds will have about 0.5 percent of fatty acids in the free form. After a year in storage, oxidation through the aging process will push that up to around 1.0 percent. Heated canola will have much higher free fatty acid levels, as heat breaks the glycerol bonds. Free fatty acids are removed with sodium hydroxide — or “soda” — in the refining process. The sodium molecule in the soda attaches to the fatty acid molecule to make “soapstock”, which is removed from the oil in a centrifuge.

The optimum moisture content for canola entering a processing facility is between 7 and 7.5 percent. That is the target moisture for ideal cooking and flaking results. Processing plants adjust canola moisture up or down as needed before cooking. “This delays product flow, which is an economic factor,” Ghabour says.

Optimum moisture levels are also important to limit the risks associated with seed spoilage and potential incubation of harmful bacteria and mold. Artificially increasing moisture levels by adding water to the canola seed prior to delivery has the potential to exacerbate these risks. Although this is an uncommon practice and illegal in the United States, it is important to understand that adulterating the seed with water to increase product weight not only increases costs associated with handling, it also poses a risk on the quality and safety of the downstream products.

Processing plants clean the seed prior to processing. Dockage removed in cleaning the canola is typically added back to the process after extraction. Scalpings, which are items screened out of the seed that cannot be reincorporated into the meal, are taken to the landfill.

“High dockage means extra work for the pre-cleaning step, and it can add extra handling costs if dockage exceeds the amount that can be added to meal,” Ghabour says.

Canola processing is an important and necessary step in producing the end products our customers want. The extra costs to process lower grade canola demonstrate why Canada has grading standards and why striving for No.1 has economic rewards. •