The major theme at Canola Discovery Forum 2018 was canola crop establishment, with part of the discussion dedicated to seeding rates. The following article will help canola farmers think through the economics behind their target stands and the seeding rates required to achieve them.

A target of five to eight plants per square foot allows for the loss of a couple of plants to frost, insects or other establishment threats while maintaining yield potential. This seeding rate is extra insurance to reduce risk. This target density range is also wide enough to allow for some uncertainty due to emergence percentage and seed size variations within a seed lot.

Here are the economic considerations for five to eight versus two to three plants per square foot.

Assuming 60 per cent seed survival, five grams per 1,000 seed size and $12 per pound seed cost, seeding to target five to eight plants per square will cost $48.00 to $76.80 per acre. With the same parameters, seeding to target two to three plants per square foot will cost $19.20 to $28.80 per acre. The difference between mid-points of the two targets would be around $35 to $40 per acre. Try to think beyond the immediate seed savings and remember that extra plants mean extra insurance.

Lower plant stands also face other subjective factors that can reduce the profit or increase risk or both. These are subjective because they are based on varying circumstances and the true cost is harder to calculate. The following discussion is for guideline purposes only, but the dollar figures will give you a starting point for your own calculations.

With fewer plants in a stand, the risk of dropping below two plants per square foot in patches (such as hilltops, for example) becomes much higher. Non-uniformity can result from seeding errors, variation in soil temperature, type or moisture, early season insect feeding, frost and more. In areas below two plants per square foot, yield potential is extremely variable (only 60 to 80 percent of full yield potential or a 20-40 percent average yield loss). If only 10 per cent of a 160-acre field is below this threshold, you could be shaving off at least 1 bu./ac. off the field’s entire yield, reducing profits by another $10 per acre. “I really think that having a target density with less than two to three plants per square foot is not reflecting the uncertainty in the density-yield relationship or the uncertainty in the estimate for emergence percentage,” Hartman says. The result of this uncertainty can be a highly variable and highly risky stand.

With fewer plants per square foot, it takes a few days longer for a crop canopy to fill in. This can mean the difference between one in-crop herbicide application per season and two. If the total cost of application is $15 and the second application is required in every second canola crop, this increases cost by $7.50 per acre of canola each year, on average.

Consider flea beetles alone. With the same number of flea beetles spread across fewer plants in a field, there will be more beetles (and feeding) per individual plant. This damage will increase the need for a foliar spray as thresholds will be reached sooner than if the same number of flea beetles were feeding on a larger number of plants. If a lower plant density means a spray is needed two years in 10 instead of one year in 10 and the total spray cost is $15 per acre, this increases cost (and reduces profit) by $1.50 per acre per year. That may sound minor, but this aggressive flea beetle feeding could also set back crop maturity or introduce disease. A foliar insecticide to control flea beetles will also kill beneficial insects in the field, potentially increasing the need for more insecticide applications in the future.

A lower seeding rate means fewer, bigger plants per square foot. That means more branches. Fewer branchier plants expands the flowering window, which increases the at-risk period for sclerotinia. It can also delay swath timing or straight combining while waiting for seeds on side branches to reach maturity. Some years this delay will be meaningless to profit, but in 2018 would a few days earlier maturity have made a difference to frost damage, locked-in green seed and overall harvest stress for at least a percentage of canola crops? Yes. The price difference between No.2 and No.1 could be just a few cents a bushel or $1 per bushel. The size of discount will vary by location, by month and by how much high-green canola is out there, but it is possible that high green when averaged over the years could significantly reduce revenue per acre for lower plant counts relative to the higher target.

Finally, with just a few stems per square foot, swaths may not anchor as securely as if they were held down by many uniform stalks. Canola plants left to stand for straight-cutting can also see some effects from wind: thicker densities will knit together and the plants will be less prone to bashing against each other and dropping seed in windy conditions compared with thinner stands. This could have no affect at all some seasons, or could be a bigger issue than people realize in high-wind events.

All things considered, Hartman says the most economic seeding rate is likely that which produces a final harvest stand of four to six plants per square foot. The saving in seed cost at the lower density generally will not fully offset yield revenue loss, resulting in profit loss. He adds that economics can start to favour low plant density with very large seed size and very low seed survival.

As part of his presentation on seed treatments, Ted Labun, seedcare technical lead with Syngenta showed the following two photos to demonstrate the value of current canola seed treatments. The first is a field of SY4135 hybrid seeded 2018 near Mozart, Sask. The second is a field of SY4135 seeded 2015 near Girouxville, Alta. Wiped out areas of each field were seeded to bare (completely untreated) seed. Areas with a decent stand had seeds with insecticide and fungicide seed treatments. Labun says: “In our commercial validation trials we are finding that soil-borne diseases and insects like flea beetles both impact final stand and overall plant health. In addition, we know that later infection by soil-borne diseases may not always reduce stand but can certainly compromise the ability of canola to compensate for flea beetle damage. In the case of these two sites, flea beetles were the primary cause of crop loss. For the Girouxville site, which was almost all stem feeding on untreated seed, a seed-applied fungicide would not have made a difference in the final outcome. Losses would still be extreme.” 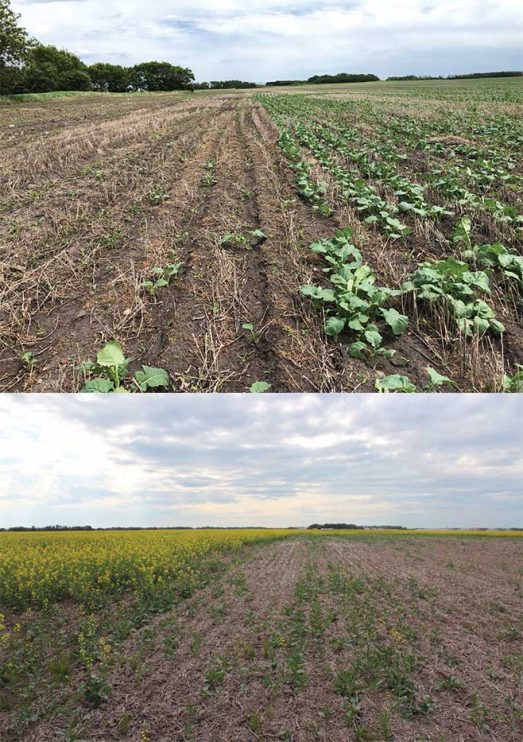