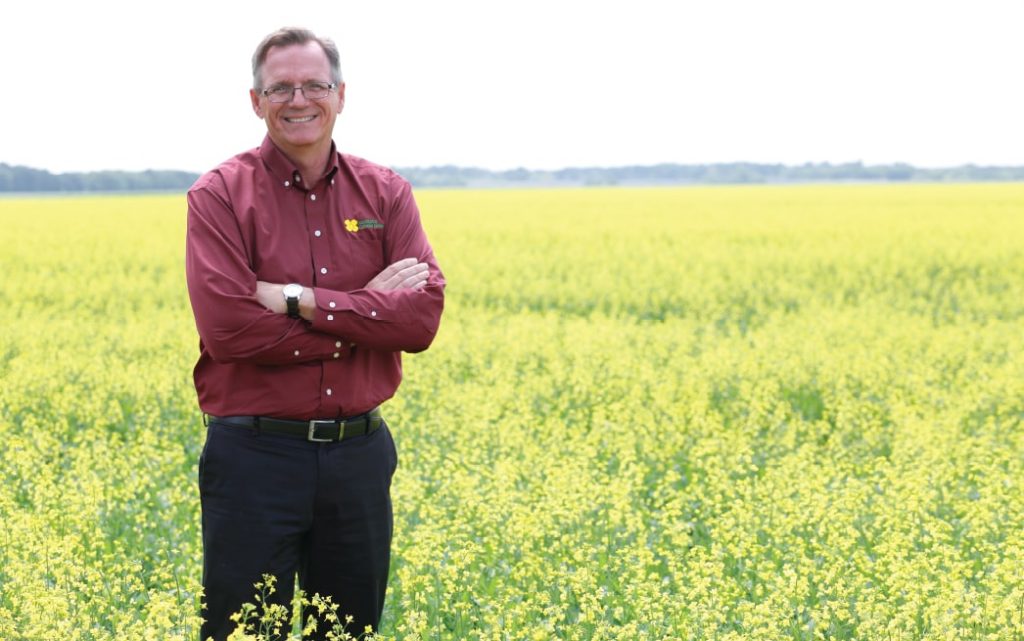 Brian has been actively involved within canola organizations and renewable fuel organizations, which has led to the development and growth of canola-based biodiesel demand in Manitoba and Canada.

“Brian was instrumental in policy development for the biodiesel industry at both the provincial and national level,” says Rick White, president and CEO of the Canadian Canola Growers Association (CCGA). “He was heavily involved in the development of federal government programs such as the EcoEnergy Program and the EcoABC program, and was a strong and effective advocate in the establishment of early biodiesel mandates. Brian was an absolute pleasure to work with and brought the influential farmer voice to the table with knowledge, passion and professionalism. His pioneering efforts on the creation of the industry and the benefits to Canadian farmers continues to this day.”

In 2003, Brian was appointed to the first board of directors for the Biodiesel Association of Canada where he appeared as a witness in front of several government committees advocating for canola-based biodiesel legislation and program development.

“Thank you for this special recognition. I accept it on behalf of a team that has worked and continues to work tirelessly to improve the viability of canola production in Canada.”
–Brian Chorney

The recent biodiesel requirement increase from two to five per cent raises the floor on biodiesel inclusion in Manitoba.

“For canola farmers this is a good news story. It points the future direction nationwide for higher minimum canola demand,” says Clayton Harder, chair of MCGA. “Brian’s strong analytical approach and focused efforts have helped steer this outcome in the canola farmers’ favour. Through Brian’s efforts at the Canola Council and multiple provincial and federal meetings with officials, this new higher biodiesel mandate is a win for Manitoba farmers.”

Brian was a director on the MCGA board for 14 years holding various executive positions and contributing to committees including Biodiesel, Research, Canola Performance Trials, Communications and Member Relations. He brought a strong farmer voice to his extended board roles sitting on the CCGA, Canola Council of Canada, Biodiesel Association of Canada and Canadian Renewable Fuels Association boards.

“I was humbled to be recognized with the Canola Award of Excellence. Everything I was involved with within canola and renewable fuel organizations was a team effort. I thank all my fellow board members and association staff members for their support over the years,” says Chorney. “We may have not done everything right along the way, but I believe we have helped increase the viability of canola production in Canada.”

Brian earned his Bachelor of Science Degree in Agricultural Engineering from the University of Manitoba. He manages a farm near East Selkirk along with his wife Brenda, son-in-law Kyle, his cousin Murray and his nephew Brad. Brian enjoys snowmobiling in the winter, and spending his summers at the cottage fishing, boating, water skiing, and enjoying dock time with family and friends.

The Manitoba Canola Growers would like to thank Brian for his contributions to the biodiesel industry and the sustained growth and prosperity of Manitoba’s canola industry.

Sign up for our Canola Crush Newsletter today! Visit www.CanolaGrowers.com