Global demand for plant-based oils increases each year and North American demand will get a big jolt in the next couple of years from renewable diesel production in the U.S. and Canada.

One Canadian announcement is from Federated Co-operative Limited (FCL), which is building a renewable diesel processor near Regina. FCL will blend renewable diesel with petroleum diesel for Co-op fuel pumps. In related news, FCL announced in January 2022 a joint venture with AGT Food and Ingredients Inc., to construct a $360 million canola crush facility near the renewable diesel plant. The crush plant will supply approximately half the canola oil needed for the diesel facility, with the rest coming from other canola processing facilities. FCL will have a few suppliers to choose from. Its joint venture is the third new canola processing facility announced for the Regina area and the fourth for Saskatchewan in the past 12 months.

Rapid growth in renewable diesel production capacity is the major factor behind these construction announcements. “Global demand for oil and meal is growing,” says Vervaet, “but the catalyst for such a surge in investment is biofuel demand.”

Renewable diesel is produced through a different chemical reaction than biodiesel, which retains some properties of its oil source, including cold-weather viscosity. Renewable diesel, meanwhile, is chemically indistinguishable from any other diesel, so it can be used at any amount and “dropped in” at any rate.

West Coast Reductions in Vancouver handles tallow and used cooking oil. A lot of restaurant cooking oil is already collected and recycled, so there won’t be a lot extra to satisfy new demand. However, used cooking oil recycled for renewable diesel has a “really good look”, says Jared Girman, manager of strategy initiatives at West Coast Reduction. The carbon intensity score for canola oil used first for healthy frying and then re-used for fuel is very good, he says.

But there isn’t near enough used cooking oil, so first generation vegetable oils – soybean and canola straight out of processing plants – will be the primary feedstock for renewable diesel. Whether used as a primary or secondary feedstock, canola oil will reduce the carbon intensity of North America’s diesel fuel supply. Vervaet has three key elements required for Canada to meet this demand opportunity: 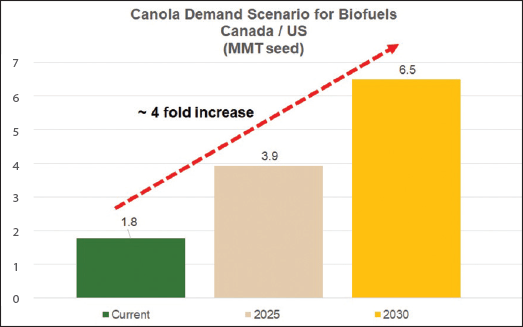 Current canola use in North American biofuel production represents around 1.8 million tonnes of seed. Chris Vervaet estimates it could be 6.5 million tonnes by 2030.