Be in the know! For the latest canola news and information,
subscribe to SaskCanola‘s newsletter at saskcanola.com.

Healthy soil is the foundation for profitable and sustainable agricultural production. The numerous benefits healthy soil provides includes enhanced fertility, increased productivity, adaptability, resiliency, and profitability. Soil processes that support plant growth and regulate environmental quality are affected by management practices. It is possible to design a crop and soil management system that improves and maintains soil health over time.

Given the fundamental importance of healthy soil, SaskCanola is co-funding three research projects designed to improve our understanding of soil health and its attributes impacted by management practices. These projects demonstrate that modern farming practices are annually enhancing the carbon sink capacity of Prairie soils while increasing crop yields on a per acre basis.

Maintaining and building soil health is an essential component of long-term sustainable agriculture. A healthy soil will produce higher crop yields under favourable weather conditions and have a strong capacity to withstand extreme weather events and reduce nutrient losses. Research must focus on methods of maintaining or improving soil health and providing appropriate protocols or tools from which soil health status can be interpreted. Even though soil health attributes have been identified, and various soil health testing protocols have been developed elsewhere, there is no standardized science-based soil health test available to producers in Saskatchewan and the Prairie provinces. This research is designed to develop a soil health testing protocol tailored to Saskatchewan’s semi-arid climate and major soil zones.

Soil organic carbon (SOC) is strongly related to many aspects of soil quality including nutrient cycling, soil structure, air and water movement, and microbial quantity and diversity. It can also be used as a measure of removal of the greenhouse gas, carbon dioxide, from the atmosphere. Since the late 1800s, the conversion of native prairies to cultivated cropland has led to considerable SOC losses. However, with the introduction of conservation agriculture management practices (CAMP), such as reduced fallow, minimal disturbance, direct seeding, and diversified rotations in the western Prairies over the past 20 years, the SOC levels in once conventionally tilled degraded agricultural soils is increasing. The adoption of direct seeding practice is shown as an effective way to improve SOC in semi-arid regions by reducing soil erosion, conserving soil water, and improving nutrient cycling resulting in higher soil productivity and improved crop yields. Although past research has provided valuable information regarding the short-term efficacy of CAMP to increase SOC levels, until this project, limited in-depth work has been done to examine the long-term effects of CAMP on the stability of sequestered SOC in Prairie soils. This project is part of the Prairie Soil Carbon Balance project initiated by the Saskatchewan Soil Conservation Association.

Different canola genotypes interact differently with soil health factors such as dissolved organic carbon, soil microbiome diversity and soil pH. However, the interaction between crop genotype and soil properties that affect crop nutrient uptake and productivity is not well known. The collaborative effort between this project and other current canola phenotyping projects will allow researchers to determine how different soil microbes under different soil health conditions can improve crop nutrient uptake efficiencies and yield.

This year the Canola Discovery Forum (CDF) and Canola Industry Meeting will join up for Canola Week – held virtually on December 1-3, 2020.

This series of virtual sessions will focus on updating all links in the canola value chain on the state of the industry, trade, end-use products and markets, research and innovation, cutting edge technologies, as well as agronomic issues and the 2020 crop. Canola fertility is the focus for the CDF sessions this year. It will also recognize Keith Downey’s legacy, as this year will be the milestone 50th anniversary of the Canola Industry Meeting.

Cast Your Vote Now for SaskCanola’s Board Election 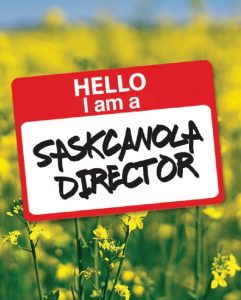 Eight nominations were received to fill four director positions at the Commission’s board table.

Biographies for each candidate are available at saskcanola.com.

All registered producers of Saskatchewan-grown canola are eligible to vote in SaskCanola’s board election and should have received a letter in early November that included a unique voter number. Visit canolavote.com to cast your vote before November 30, 2020. Alternatively, registered producers can still vote by paper ballot upon request.

The results of the election will be announced in December.

SaskCanola is governed by farmers so make sure your voice is heard and vote!

The Canadian Grain Commission (CGC) operates under the mandate created by the Grain Act. The last time there were any significant changes to the Grain Act was in the 1970s, a time when there was a fully operational Canadian Wheat Board. Clearly, a lot has changed since then, and pressure has been mounting for an overhaul of the Grains Act and an update of the CGC.

In 2018-19 Agriculture and Agri-Food Canada initiated a review of the Canada Grain Act (CGA). The budget of 2019 confirmed the federal government’s desire to review the CGA, but the review was put on hold with the onset of COVID-19. The accumulated surplus is not a part of this review.

There is though, still a need for reform. SaskCanola works with other organizations, including the Canadian Canola Growers Association and the Canada Grains Council, to promote meaningful change. There are three main points of focus for SaskCanola when it comes to the Canadian Grain Commission.

Saskatchewan farmers continue to do their part to feed the world. SaskCanola continues to work on their behalf to guarantee that the food produced by those farmers efficiently makes its way to people who need it the most. 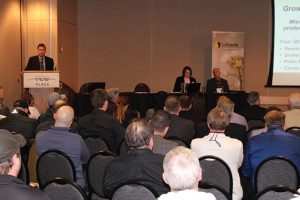 Join SaskCanola for their virtual Annual General Meeting on Tuesday, January 12, 2021 at 9:30am.

The AGM agenda will include a review of SaskCanola’s investment priorities, audited financial statements, and budget.

Visit saskcanola.com for details on how to register, vote, and submit resolutions.