The federal government’s priority to further build relations in the Indo-Pacific represents a significant opportunity for Canada to diversify exports of canola. This article outlines the strategic steps value chain organizations recommend to strengthen Canada’s presence in this promising region.

Positive demographic and income growth trends in the Indo-Pacific have significantly increased market interest in the region, not just for Canada, but for many other “competitor” countries. As approximately 90 per cent of Canadian grown canola is consumed in export markets, Canada’s canola industry wants to pursue trade opportunities in the Indo-Pacific. The Canola Council of Canada’s Keep it Coming 2025 strategic plan puts a priority on strong trade relations.

The Liberal government’s re-election platform included a promise to launch a new, comprehensive Indo-Pacific strategy to further build diplomatic and economic partnerships in the region. Having trade diversification listed among the primary goals of this strategy presents an opportunity for canola and other commodities.

On June 1, the Canola Council of Canada (CCC), Cereals Canada and Pulse Canada released a jointly commissioned report outlining steps the government can take to move toward agricultural export growth in the Indo-Pacific. The report’s key recommendation is to establish an in-region centre of excellence: a Canadian Indo-Pacific Diversification Office.

The right region at the right time

Currently, more than 40 per cent of Canada’s canola seed, oil and meal exports are bound for the Indo-Pacific. The region includes top canola markets China and Japan as well as Pakistan, India and the Southeast Asia countries. Market access issues in the form of non-tariff barriers (NTBs) are becoming more prevalent and hinder Canada’s ability to grow our footprint in the region. Matters causing NTBs are complex and diverse, so there isn’t a one-size-fits-all approach or one type of expert who can address them.

Having a trade office in the Indo-Pacific will not only support a timely response to market access issues, but will also give Canada a competitive advantage over other countries vying for business in the Indo-Pacific. It signals Canada’s commitment to these key markets and positions Canada as a trusted knowledge partner to help foster greater relationships with government officials and regulators in the region while also engaging in capacity building activities.

Staffing the office with the right people is also a cornerstone to the success of this approach. Having experts from various facets, including technical personnel, like plant scientists and pathologists to advise on sanitary and phytosanitary issues, along with regulatory and trade policy professionals, is key. This helps ensure that no matter the type of issue, there are boots-on-the-ground experts to take proactive measures and address NTBs quickly. These highly technical experts will complement current resources in the region such as Trade Commissioners, embassy officials and provincial trade representatives.

The same day as the release of the report, representatives from the three organizations appeared before the House of Commons Standing Committee on International Trade to discuss this recommendation and the business case behind it.

Following that appearance, on June 9, 2022, Ottawa announced that the Honourable Mélanie Joly, Minister of Foreign Affairs, had organized an expert Indo-Pacific Advisory committee to give independent insights and guidance to inform government’s promised strategy. Further announcements from the federal government are expected later this year and could include the release of their highly anticipated Indo-Pacific strategy.

The value chain organizations’ report and recommendations are clear: expanding Canada’s exports to the Indo-Pacific will help build Canada’s resiliency and establishing an in-region trade diversification office is a major milestone to get there. The CCC and its value chain partners will continue advocacy on this issue over the coming months.

Visit growindopacific.ca for more about this initiative and to read the executive summary of the report. 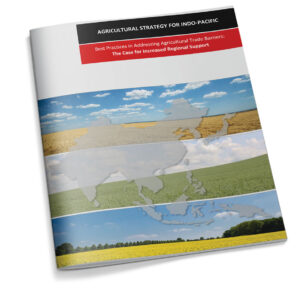