Key Result: Canola benefits from having abundant pollinators. Ongoing research is determining in what contexts yield and seed quality benefit the most from pollinator activity.

Several surveys and experiments were conducted to investigate the impact of pollinators on canola yield and pollination efficacy, and to generate a better understanding of bee behaviour.

Surveys were conducted around Lethbridge and Grande Prairie in 2014 and 2015 to identify which pollinators were present in commercial canola and their impact on yield. Pollinator diversity and abundance were surveyed at four distances from the field edge (five, 20, 100 and 400 metres into the field) and those counts were related to pollen counts and seed yield.

While bee abundance declined with distance from the field edge, pollen deposition on flower stigmas did not decline in 2014, indicating that bee pollination accounts for only a portion of the total pollen deposited on stigmas in these commodity canola fields.

In 2015 and 2016, canola fields used for seed production were also surveyed. There was a decline in pollen deposition with distance into the seed production fields in both 2015 and 2016. This indicates that honey bees likely play a larger role in pollen deposition in the seed fields than in the commodity fields, and that role is present despite the activity of leafcutter bees in all the study fields. A decline in seed yield was observed with distance from honey bee hives in 2015, indicating that there may be a pollination deficit at greater distances from the honey bee hives.

Pollinator efficacy and response were tested in 21 hybrid canola seed production fields in 2015, and 18 fields in 2016. Female leafcutter bees, which hold their pollen on hairs located on their abdomen, were the best at depositing pollen. They were more effective at pollen deposition than honey bees and even male leafcutter bees (who have much less substantial abdominal hair). 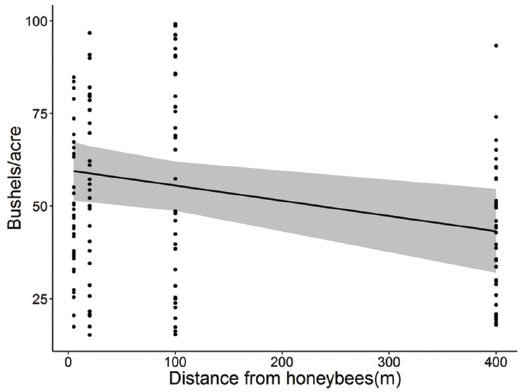 Another trial found that wild pollinators, which may not contribute directly to pollination due to a low presence, may still contribute to hybrid canola pollination by inducing more movement of managed pollinators between the male and female flowers.

In 2014 and 2015, the research found that singles (one honey bee brood chamber) could be included in hybrid canola pollination in addition to doubles, as long as a similar stocking rate of number of frames of bees per acre is met.

A number of pollinators are found in commodity canola fields, but the abundance and diversity varies regionally. Managed honey bees are a common pollinator, as are flies and bumble bees. There are benefits to the crop of having abundant pollinators, and ongoing research is determining in what contexts yield and seed quality benefit the most from the actions of pollinators.

Hybrid seed fields are highly dependent on pollinators for seed set, and careful pollination management will increase yield. Both abundance and diversity of pollinators will benefit seed yield.

Finally, canola is a good crop for honey bees, and both growers and beekeepers benefit from the relationship between bees and canola.