Clubroot is a devastating disease and the canola industry has been investing in research of this pathogen for a number of years. SaskCanola’s priority with clubroot is to find ways to prevent the spread in the province. Currently there are relatively few confirmed cases in commercial canola fields and by helping raise grower awareness about prevention of spreading clubroot contaminated soil alongside of strategic use of resistant varieties, there is a unique opportunity to contain these cases. SaskCanola invests grower dollars into research that leads to new resistant varieties for growers to use, but this is only one tool available. By managing for the disease before it becomes visible in the field, growers will continue to be successful. 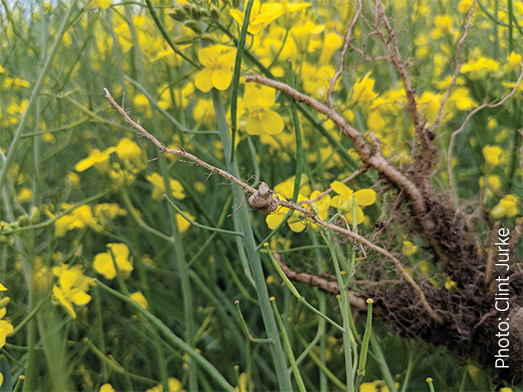 In addition to incorporating clubroot-resistant varieties, growers
can also:

Monitoring the threat of clubroot in Saskatchewan —Strelkov 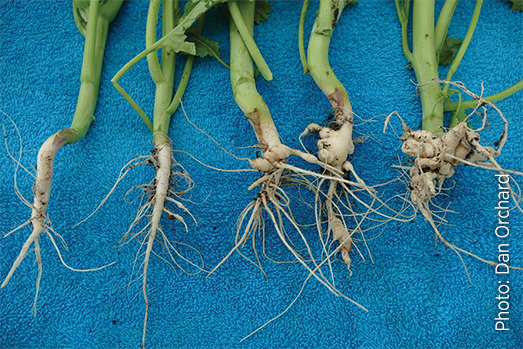 The primary purpose of the project titled Clubroot Surveillance and Pathotype Monitoring was to map the spread of clubroot in Western Canada and determine if there have been any changes to the pathogen itself. Some of the findings contained in the project’s final report had been expected, but still proved to be quite sobering.

The clubroot map continues to expand in Alberta and Manitoba, and the pathogen has now established a foothold in Saskatchewan. It is important to note that what is known as first generation resistance, that is, the first type of resistance bred into commercial varieties, is now breaking down in Alberta. Pathogen types that have overcome varietal resistance have been found in Manitoba as well, but none have yet been detected in Saskatchewan, so there is still an opportunity to stay ahead of this devastating disease.

Some of the significant outcomes of the CARP project are:

Stacking multiple clubroot resistance genes increases the durability of those genes and expands the range of protection against additional clubroot pathotypes that those individual resistance genes cannot protect against. 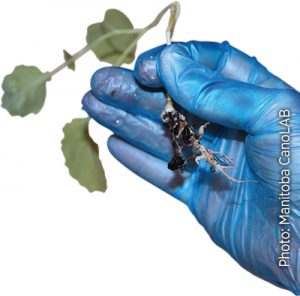 It is important to note the two interdependent elements in the battle against clubroot: strategy and tools. The strategy involves reducing the movement of soil from field to field, extending rotations and eliminating alternate hosts such as wild mustard, stinkweed and volunteer canola.

The most effective tool that farmers have is varietal resistance, but this should not be expected to shoulder the entire burden of protecting Saskatchewan fields from clubroot. Incorporating an effective clubroot strategy which includes a three-year crop rotation and incorporating resistant varieties are the best ways to make sure Saskatchewan growers can stay ahead of clubroot.

For more details on this research project, search Strelkov in the “Research” section at saskcanola.com

Major gene resistance can be very effective in reducing disease severity and progression in crops in general. Due to selection pressure in the field for diseases like clubroot, it is only a matter of time before a pathogen population can break any mechanism of major resistance, especially under conditions of high spore loads in the field. One way to improve the durability of major gene resistance is to stack multiple resistance genes with different modes of action together in one canola line. This makes it much more difficult for a clubroot pathogen population in a field to evolve to break resistance because it needs to overcome combined multiple sources of resistance at the same time.

This project studied the simulated effect of high selection pressure over five generations of canola grown in the same soil that was inoculated initially with either high or moderate spore loads. Any galls that formed in each generation in any given pot were cut up, allowed to mature, and then added back to the same potted soil. Over the course of five generations of canola planted in re infested potted soil, the spore load was expected to be maintained or increased in the case of sensitive canola lines, and potentially decrease over time for resistant canola lines.

The use of five generations of canola in continuously re-infested soil was also expected to show potential timelines of resistance breakdown. At high spore loads in the soil, resistance can be broken quickly, even by the third generation of back-to-back canola and this caused continually increasing spore loads over the successive generations. Under lower initial spore loads, as can be achieved through proactive clubroot management practices, the resistance was not broken, even after four generations. This validates the importance of using at least a three-year canola rotation to keep clubroot spore loads under control and to prevent the rapid breakdown of resistance of the major R genes which are needed by all producers.

For more details on this research project, search Peng in the “Research” section at saskcanola.com

Combining two to three resistance genes in canola lines also had added benefit of greatly reduced disease severity compared to lines with only a single resistance gene. This effect was observed in canola challenged with either common ‘old’ pathotypes such as 3H and even the ‘new’ highly virulent 5x clubroot pathotype. This is an important distinction in that the stacking of two major resistance genes, that individually are unable to protect canola lines against pathotype 5x, was then able to provide intermediate protection against 5x. This opens the door to more research to discover the best combinations of existing R genes which can be given new life to provide resistance against virulent pathotypes that will evolve in the future.