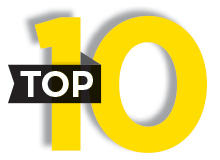 Who has the A-Z on canola production? The Canola Encyclopedia, that’s who. Farmers and agronomy providers with questions go to canolaencyclopedia.ca for science-based answers on weeds, insects and diseases, plant establishment, nutrient management, and on harvest loss and storage. Here are the top 10 most-viewed encyclopedia pages for first nine months of 2022.

1. GROWTH STAGES. This chapter describes all stages of canola plant growth from germination to senescence. A great feature is the graphic on canola growth stages, posted in the overview section. It shows clearly what four-leaf, rosette and bolting stages look like.

2. FLEA BEETLES. Flea beetles were out and looking for food when a lot of late-seeded canola was emerging. Canola Watch, which drives a lot of traffic to the Canola Encyclopedia, started talking about flea beetles in early May and ramped up in June with headlines like “Slow-starting spring = buffet for flea beetles” and “Seedling canola’s #1 threat: flea beetles.”

3. CUTWORMS. These big eaters are always lurking in the soils, ready to chomp. Cutworm chapter page views were up nine per cent over 2021 and average time on page, at just under eight minutes, was the most of any other topic in the top 10. People really dig their cutworm reading.

4. HISTORY OF CANOLA SEED DEVELOPMENT. This chapter sees steady traffic throughout the entire year. It starts with the ancient history of brassica oilseeds and moves quickly to the main feature: the Canadian researchers who developed canola with its low erucic acid and low glucosinolate levels. The chapter has sections on herbicide-
tolerant canola, hybrid canola and fatty acid profiles.

5. SCLEROTINIA STEM ROT. With better yield potential in 2022, sclerotinia stem rot had a 20 per cent increase in page views over 2021. This perennial pest moved up two spots on the top 10 list, luring people with its visuals on sclerotinia identification, best management practices and a detailed table of fungicide products.

Canola Watch quizzes always drive a lot of traffic to the Encyclopedia. To test your knowledge on a year’s worth of quick quizzes, go to canolawatch.org
and click on “Quizzes” in the Quick Links box.

6. LYGUS BUGS. Lygus ate and ate through August, with most of the concern in Alberta. Should I spray?! Economic thresholds, now 20-30 per 10 sweeps, were revised recently and the Canola Encyclopedia describes in adequate detail the new thresholds as well as scouting tips and insect identification.

7. CLUBROOT. Information gathering on now-familiar clubroot tends to ramp up in late summer when galls and sick plants are most obvious. Around that time, farmers with clubroot will start seed shopping. As usual, Canola Encyclopedia delivers, giving shoppers a complete list of clubroot-resistant canola cultivars.

8. DIAMONDBACK MOTH. Prairie Pest Monitoring Network in mid August predicted that diamondback moth development would be marginally greater in 2022, and that warm conditions during August resulted in rapid development of populations. Canola Watch also talked about diamondback moth more than usual in 2021. The search for BMPs pushed DBM into the T10 for ’22.

9. BLACKLEG. With the increase in sclerotinia stem rot and arrival of verticillium stripe, farmers and agronomists were checking Canola Encyclopedia to brush up on their disease identification skills. The blackleg chapter has information on testing for races and on R-gene rotation for those close scouters seeing a rise in blackleg severity.

10. HARVEST MANAGEMENT. Greased by better yields, this chapter slid into the 10-spot for 2022. Straight combining continues to gain in popularity, and the Canola Encyclopedia chapter has lots of tips. Swath timing was another hot topic in 2022 because a high number of people are still cutting too early – before 60 per cent seed colour change – and Canola Council of Canada agronomy specialists talked a lot about it.