With $50,000 or $100,000 worth of canola in just one big bin and with longer on-farm storage requirements for some contracts, farmers want help to manage these bins for good drying days, potential spoilage and even theft. Wireless bin management systems offer solutions.

Big or small. Flat or hopper. Whatever the bin shape may be, canola going into storage requires proper conditioning and follow up monitoring. The first step is to turn on aeration immediately after harvest.

“Conditioning after harvest is the number one priority for canola going into storage. For long-term storage, canola needs to be cool and dry,” says Angela Brackenreed, Canola Council of Canada (CCC) agronomy specialist at Minnedosa, Man.

The CCC recommends that canola seed is dried to eight per cent or less and cooled to less than 15°C. Freshly harvested canola can respire for up to six weeks, creating heat and moisture. Aeration will help to cool the grain. If the crop came off tough, natural air drying, given the right fall conditions, can be used to bring moisture content down to a safe storage level.

“Even with technology, which is a great addition to help ensure safety in storage, I still recommend physically checking the bins. Technology isn’t fool-proof, and there is too much value in the bin to risk losing it.”

Brackenreed says bins should be monitored closely during the first six weeks after harvest to ensure the moisture and temperature has stabilized throughout the bin. Afterwards, regular monitoring will ensure any hot spots are detected so that mitigation measures can be taken to prevent spoilage and downgrading of the crop.

Here’s a look at some new bin monitoring and storage technologies:

With the basic version, producers locate their field on the map, select their grain type, and BINcast provides the forecast for the best upcoming aeration times and days. With the advanced version, producers also enter fan, bin and grain characteristics to optimize the drying schedule according to the target moisture content of the grain. A fully deployed system includes some reference monitoring units in a few of the grain bins. For more information, contact Weather Innovations Consulting in Ontario at 519-352-5334 or weatherinnovations.com.

OPI Blue is a wireless system that delivers hourly grain temperature and moisture readings to your mobile or desktop devices and allows you to turn on fans remotely. OPI Blue has weather station integration for ambient temperature and relative humidity conditions and makes equilibrium moisture content (EMC) calculations. This can be used to make fan on-off decisions.

The system provides grain inventory levels and an ability to view all bins at once.

OPI Blue can be incorporated into your current OPI grain management system using existing cabling or purchased as a new system. It works with PC, Apple and Google (Android) platforms, and new features automatically download from the Internet. For more information, contact OPI Systems in Alberta at 800-661-1055 or advancedgrainmanagement.com.

With the Guardian Remote System, bin data is read automatically and continuously without the need to visit each bin. The Guardian Remote System can be monitored from anywhere in the world. Guardian’s advanced temperature and moisture sensor technology and straightforward user interface provide everything needed to make accurate storage management decisions. Conditions are read and synced to your account automatically through Wi-Fi or cellular connection. Automated alerts and alarms ensure any potential problems are immediately identified. Multiple users can view up-to-date condition. For more information, contact Ag Growth International (AGI) in Manitoba at 204-489-1855 or aggrowth.com.

CrossFlow Aeration uses horizontal air movement to cool grain faster and in less time while using smaller fans than traditional aeration systems. The CrossFlow system forces air through the bin by using columns mounted on the inside walls of the grain bin. The air then moves horizontally to the GrainAir Tube in the centre of the bin where heat and moisture are released.

By moving the air horizontally to the centre of the bin, the distance required for air to travel is drastically reduced. It also reduces static pressure and prevents over-drying the bottom of your bin while soaking the peak.

Once aeration is complete and the fan is shut off, the GrainAir Tube becomes a Powerless Aeration System. Cooling the grain through natural convection, removing any heat build-up automatically. For more information, contact Gatco Manufacturing in Saskatchewan at 306-778-3338 or gatcomfg.com.

The GrainViz bin monitoring system uses radios mounted inside bin walls, broadcasting and receiving signals that translate into three-dimensional images of mois-ture conditions and potential problems within a bin. Each bin comes equipped with an onsite weather station and communication platform for data transmission. Growers can access the information through an online platform they can see with an app on a phone, table or directly online. GrainViz will send SMS updates (text alerts) and email notifications.

With GrainViz, farmers can control bin fans from anywhere in the world. It can also alert to insect infestations in real time. Detailed inventory management and reporting can identify the exact weight of the crop in your bin. For more information, contact GrainViz in Manitoba at 1-866-240-6153 or grainviz.com.

Brackenreed says that while technology is great, growers should also have a plan to regularly visit and manually check the bin.

“Even with technology, which is a great addition to help ensure safety in storage, I still recommend physically checking the bins,” she says. “Technology isn’t full-proof, and there is too much value in the bin to risk losing it.”

Take 25,000 bushels of canola and multiply by $10 per bushel and that equals a lot of risk sitting in the bin. Recent research by Lorne Grieger at the Prairie Agricultural Machinery Institute (PAMI) looked at fan and airflow information for a 25,000-bushel bin.

“With a standard, single phase 10-hp centrifugal fan, we weren’t able to fill the bin completely before the static pressure maxed out,” says Grieger. “Once we hit 17,000 bushels, the fan could no longer push air through the grain.”

The study also looked at how a grain spreader that flattened the cone of grain in the bin affected airflow. The spreader treatment with a flatter surface actually had a higher static pressure than the bin with a cone. Theoretically, a flat surface should have a consistent airflow pattern inside the grain mass because with a peaked surface, the air can short-circuit around the outside of the bin due to the lower resistance to airflow. An inconsistent airflow pattern can cause some grain to not be conditioned as quickly or at all.

Research is ongoing to determine the airflow patterns in the bin. Grieger says the implication of the initial finding is that there is a limit to how big the grain bins can go with single-phase-power aeration fans. A 10-hp fan is the maximum size that growers can use on the farm with single-phase power. To use a bigger fan, they would have to upgrade to a three-phase electrical system or consider a PTO-powered fan. 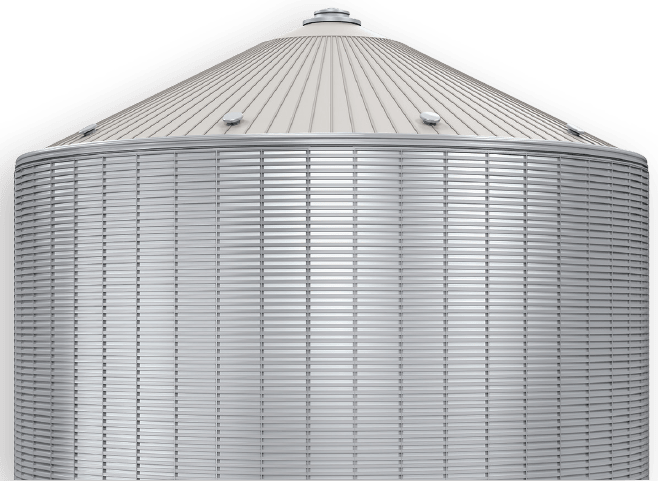 In the first year of a multi-year study, researcher Fuji Jian with the Department of Biosystems Engineering at the University of Manitoba is looking at how harvest timing and pre-harvest treatments affect canola respiration and storage. The research is funded by the Prairie Agricultural Machinery Institute (PAMI) at Portage la Prairie, Man. through Growing Forward 2 as part of a larger study on straight-combining canola.

In 2017, Jian obtained canola samples from PAMI.
The canola was harvested by:

The canola was conditioned to 11 per cent moisture content (wet basis). Canola respiration was determined by measuring carbon dioxide in sealed flasks kept at temperatures of 20, 25, 30 and 35 degrees Celsius (°C)
over a period of 70 days.

Jian says at least two more years of research is necessary to confirm the results, and what the implications of harvest management practices would be for canola storage.