The Alberta Canola Producers Commission is seeking four canola growers to serve as directors on the Board of Directors for a 3-year term. This year, directors are needed in regions 1, 4, 7, and 10. 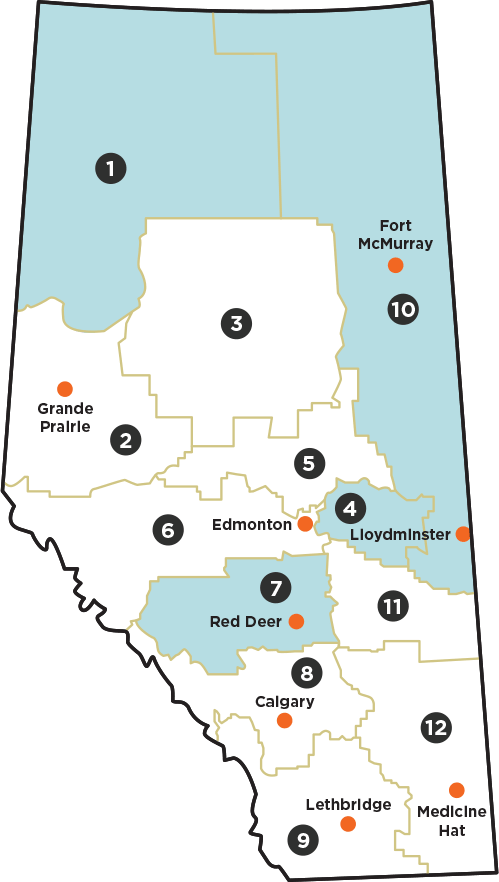 Alberta Canola divides Alberta into 12 regions, with each region electing a producer director to represent the canola growers within that region. The Board of Directors meets quarterly and is guided in decision making by five committees comprised of board members: Agronomic Research, Governance & Finance, Grower Relations & Extension, Government & Industry Affairs, and Public Engagement & Promotion.

Who can become a Director?

Anyone who has paid a service charge on canola to Alberta Canola since August 1, 2017 is an eligible producer and can stand as a director. Eligible producers can be individuals or represent a corporation, partnership, or organization. In order to be nominated, eligible producers must grow canola within the defined region but do not have to reside within it.

Click here for detailed descriptions of the regions, more information or to make a nomination, or call the office at 780-454-0844.

The biggest agronomy event of the summer, canolaPALOOZA, was held on June 26 at the Lacombe Research and Development Centre. This year’s event, the fifth annual, had over 700 people come through to visit more than 25 stations. Station themes ranged from stand establishment to integrated pest management to combine optimization and harvest management – and everything in between. More than 125 instructors, as shown in the group photo, ensured that attendees could get an expert answer for every canola question.

Australian agronomist Ardina Jackson, who planned a trip to canolaPALOOZA as part of her Western Canadian tour, shares her experience from the 2019 event. Here is a segment from her blog post:

As the tents were being set up and the sun was beginning to crawl out from behind the clouds, it looked like the day was off to positive start. The first of the attendees began to roll in around 9:30am and they just didn’t stop. From clubroot tents, to pulses, to wheat varieties, honey bees, and everything in between, there was a station to take everyone’s fascination.

Physical examples of bugs and plants took up most of the tables and plot ground around the site. It was a truly interactive environment. The sharp minds of the industry experts were ready to answer any question, and never hesitated to offer insight to a curious onlooker. It was surprising just how willing to chat everyone was. You could become easily absorbed in the day as they catered to anyone’s learning style. Detailed and factual displays paired well with the free water, as it ensured attendees stayed hydrated and focused on getting the most out of the day.

I noticed many farmers at the event, but also an insatiable curiosity among agronomists and experts to investigate many of the tents themselves and network with the crowd. However, this was no ordinary networking. I’d never seen such humour and inventiveness to entertain the attendees. The atmosphere was full of optimism and good spirits.

The 2019 Alberta Combine College, co-hosted by Alberta Canola and the Canola Council of Canada, was held at the ENMAX Centre in Lethbridge on Wednesday, July 10.

It featured presentations about managing harvest and measuring losses, with sessions focusing on grain grading, harvest aids, late season diseases in canola and an update on market access from the Canola Council of Canada.

Brooke Parker of Risdon Farming near Strathmore, who attended the 2019 Alberta Combine College, shared her experience from the event in a blog post.

Get the knowledge you need to be more profitable at one of our 12 Powering Your Profits Tour stops across Alberta this November. Topics will include agronomy, marketing and business management.

Find an event closest to you and save the date.

Get complete details about the Powering Your Profits Tour here.

KEEP UP TO DATE. Receive the latest news, media releases and daily
grain prices when you subscribe to the Alberta Canola Connections Newsletter. Visit albertacanola.com/subscribe today.