Heaters added to bin aeration systems will greatly increase air’s capacity to dry at a time of year when natural air drying just isn’t practical or often even possible.

If Prairie farmers face another wet harvest, they’ll be left with a lot of damp and tough grain to deal with again. Many producers use natural air drying (NAD) systems, but cool fall air blown through a bin has very little capacity to dry tough grain. Adding supplemental heat will allow farmers to use their bins to remove moisture from their grain.

“Airflow rate is the most important component of any in-bin drying,” says Glenn Wilde, engineer and director with Top Grade Ag.

Airflow is particularly important in canola because of its higher resistance, adds Angela Brackenreed, agronomy specialist with the Canola Council of Canada. “The smaller the grain, the smaller the voids between the grain, which means more resistance to airflow,” she explains.

Glenn Wilde warns that canola is prone to heating even if the moisture content is low, and that adding excessive heat makes it extremely important to ensure the bin is cooled down sufficiently after turning off the supplemental heat. Increased temperature also raises the risk of fire, he notes.

Prairie Agricultural Machinery Institute (PAMI), which is currently working on a research project comparing drying systems in Alberta, urges farmers to maintain consistent air temperature flowing to the bin as much as possible. This can be achieved with thermostatic controllers.

In recently released trial results, PAMI reported a risk of overheating grain unless an adequate airflow rate – a minimum of one cubic food per minute per bushel (cfm/bu.) – can be ensured.

Fuel type has the greatest impact on operating costs. Although natural gas is the least expensive fuel, Brackenreed notes most farms don’t have access to it. And although propane is often cheaper than diesel, diesel is very easy to use and everyone has diesel tanks on the farm,
she says.

Breaking down the costs for supplemental heat, Wilde says a standard system with natural gas would be close to two cents per point of moisture removed per bushel, while propane or diesel would cost closer to five cents.

An off-grid farmer he dealt with had all-in costs, including generating power with a diesel generator, of around eight cents per point per bushel.

He notes costs are dependent on factors like commodity prices, generator efficiency and IBD system efficiency. 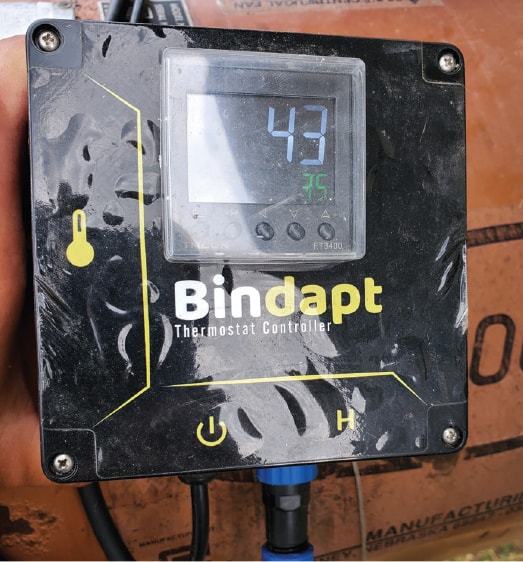 Advantages to IBD include adding value to bins with multifunction use, says Wilde. “It’s also a safe and effective method of drying and is easily scalable, not requiring hundreds of thousands of dollars to do. They’re also easy to get up and dismantle seasonally,” Wilde says.

PAMI says IBD has the potential to be a lower capital alternative to a stand alone dryer set up, but adds that careful management is required to keep operating costs comparable to that of a dedicated dryer system.

One drawback is that the IBD drying front can create a tough top and overdried bottom, Wilde says.

PAMI trials suggested that over-drying at the bottom of the bin may not be avoidable, and that an average dry moisture should be targeted and then the grain shouldbe mixed.

“It’s very hands-on,” agrees Brackenreed. “It’s not like we can add heat and then walk away from it.”

Another limitation is the system becomes less of an option once temperatures start falling below 0°C, she says.

“Airflow rateis the most important component of any in-bin drying.”

Although he says any fan can be used for IBD applications, he says low-speed centrifugal is the better option for low static pressure. In his experience, axial fans are only good for very small batches.

Brackenreed adds: “There’s fans that produce high air flow, but that don’t operate at high static pressures. These are great for conditioning beans and corn, but will be useless when trying to condition canola.”

Brackenreed notes some farmers will under-fill bins to get better airflow results. She adds that a perforated floor on a flat-bottom bin typically allows for more even air distribution and less resistance to airflow.

“With portable heaters, there’s more opportunity for heat escape and heat loss, but they’re also convenient, often having multiple outlets, and can be moved from bin to bin.”

Ducting is a huge item, and operators must be conscious of what their ducting is sized for, Wilde says. Brackenreed adds that ducting can affect resistance to airflow, and that poor ducting will create avenues for heat escape.

PAMI advises farmers to ensure adequate ventilation in the headspace as condensation on a cold bin roof can cause moisture problems in the stored grain. Brackenreed notes the rule of thumb of one square foot of ventilation for every 1,000 cfm of airflow.

Providing enough BTUs to remove moisture is key to predictable and consistent drying, Wilde says. For a rough guide, use this formula to choose the right heater: Heater capacity (btu/hr) = temperature increase (degrees C) x air flow rate (cfm) x 2.05. For example, a target increase of 25°C multiplied by airflow of 2,500 cfm multiplied by 2.05 will require a heater capacity of 128,000 btu/hr.

Brackenreed notes that potential heat transfer loss can be as high as 50 per cent, but choosing a heater can go beyond simple energy efficiency. She explains: “With portable heaters, there’s more opportunity for heat escape and heat loss, but they’re also convenient, often having multiple outlets, and can be moved from bin to bin.”