Even with a trait that limits the amount of pod shatter, canola hybrids left standing will experience some level of pod loss. This article provides scouting and agronomy tips to identify the point at which canola hybrids should be straight combined, so growers make the right decision – and limit harvest losses – for each specific hybrid.

The Canola Council of Canada, in collaboration with seed companies, is working on a pod shatter rating scale to describe the differences in pod shatter resistance among commercially-available hybrids. This will be similar to a lodging score already widely adopted by industry. The hope is to have this ready some time in 2022. In the meantime, this article will describe a few tips to make sure canola is straight combined before pod shatter begins.

The high potential for yield loss before and during canola harvest is due in part to the non-synchronous nature of pod and seed maturation – bottom pods mature faster than top pods and the main stem matures at different rate than side branches. If the plant matured uniformly, it would be much easier to manage.

Shattered pods drop their valves and seeds, leaving nothing but the membranous pseudoseptum attached to the plant.

Growers often use one of three strategies to time the start of straight combining. It can start when seed moisture is below an established concentration, when pod material has dried down, or when the stalks are dry. Those who wait for dry stalks will have an easier combining experience, but stalks can take a long time to dry naturally and, while waiting, the risk of pod shatter and pod drop increases.

On the other hand, combining as soon as seed moisture is below an established concentration could create issues with green plant material. Plugging may be more frequent, threshing losses may be difficult to reduce, and green material may be difficult to chop and spread. Green leathery pods will often pass through the rotor and be spit out the back, unthreshed. This can be hard to correct without cracking seed.

Aiming somewhere in the middle could strike a balance between acceptable seed moisture and ease of harvest. If harvest ease is the prime objective, growers could try a pre-harvest aid to move harvest along while keeping shatter and pod drop to a minimum.

Find more on canola harvest in the Harvest Management section at canolaencyclopedia.ca

The IHARF report also stated, “not applying a pre-harvest herbicide or desiccant should be considered a potentially viable option, especially for early-seeded, reasonably uniform and weed-free fields where a hybrid with good pod shatter resistance is grown.” The key is that not all hybrids are the same, and they should not be treated the same when it comes to straight combining timing. Some should be cut the day they’re ready. Others can hang on for a week or two with minimal pod shatter.

The key is that not all hybrids are the same, and they should not be treated the same when it comes to straight combining timing. Some should be cut the day they’re ready. Others can hang on for a week or two with minimal pod shatter.

Canola seed losses before and during harvest are caused by two factors – pod shatter and pod drop. They are different and current research and observations have reported that these are controlled by different genes.

Canola shatter refers to the splitting and loss of seeds from the seed pod (or “silique”) while the small stem (or “pedicel”) of the pod remains attached to the main stem (“raceme”).

Pod drop refers to the snapping- off of the entire intact pod at the junction of pedicel and raceme.

Both of these contribute to harvest loss. Companies have made significant genetic improvements in preventing or reducing pod shatter in the past years, particularly with interest in straight combining rising. Companies also look at pod drop, but the environmental effect on pod drop makes it a more challenging trait to test and select for.

A canola loss study by Andrea Cavalieri with the University of Manitoba found that genotype is the primary influence on pod shatter, while environment along with genotype are the dominant drivers for pod drop. This environmental effect was evident in 2020, when parts of the Prairies experienced a number of days with very high winds in late summer and early fall. Shatter-resistant hybrids performed well and did not easily shatter, but many fields experienced high levels of pod drop. Due to the fact that the seed-filled pods did not shatter, these heavy pods were ripped off the plant at the junction of the raceme, and yield was reduced as a consequence.

While scouting to see if a crop is ready to combine, check for pod shatter and pod drop. Shake a few plants to simulate a strong wind and check if pods are dropping. If they are, this crop should probably be combined. 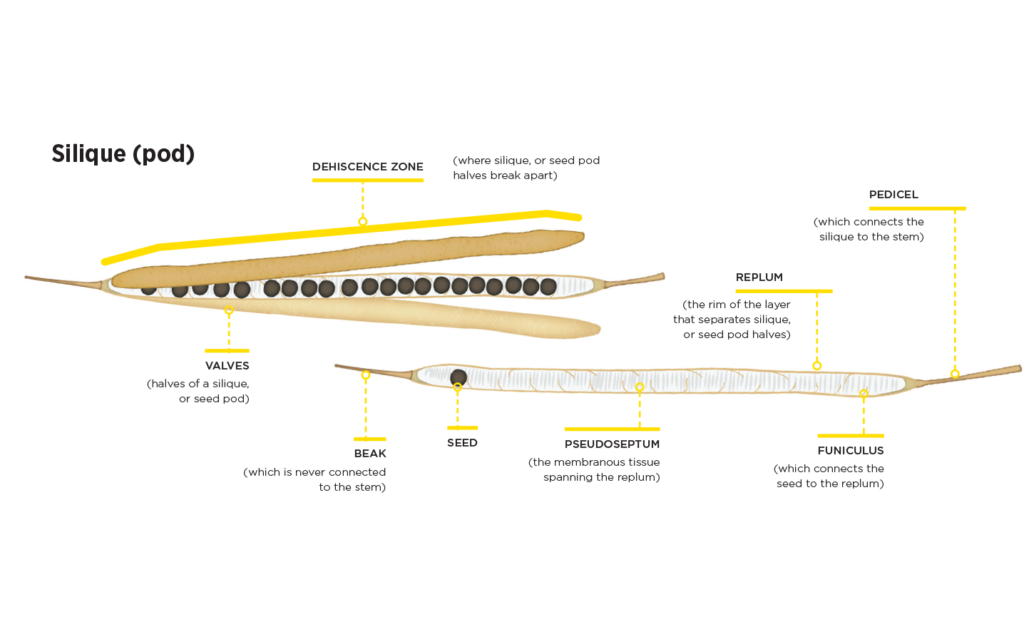 Western Canada Canola/Rapeseed Recommending Committee (WCC/RRC) has a sub-committee working on a pod shatter rating scale for canola cultivars. The current plan is to use a one-to-nine scale. Cultivars with a seven rating are “good” for pod shatter resistance and those with a nine “do not shatter”.

The greater the shatter resistance, the lower the risk in delaying harvest. Intermediate products – those with a seven rating, for instance – can work well in many situations, but growers need to know they will not protect yield as well as an eight in cases of wind or hail events if the crop is dry.

The rating scale is a work in progress. It will not be ready for 2022 seed purchases made this fall, and the final version is subject to change.

The ideal crop for straight combining

Here are field factors for a successful straight-combining experience. For thin crops, read “other considerations”.

Well-knitted plants. The crop should be well knitted and slightly lodged to reduce wind whipping that can increase pod shatter and pod drop. If a large proportion of the plants appear to move independently in the wind, they will be at higher risk as the plants senesce and dry down.

Healthy pods. If a lot of pods have been damaged by frost, drought, hail or insect damage, this may not be a good candidate field for straight combining. Hail will typically cause more damage to a standing crop thana swathed crop.

Uniform growth stage. A uniform crop with all plants drying down at the same rate makes straight combining easier to time.

No green weeds. Weeds may stay green longer, and make straight combining much more onerous on the combine. Green material may also end up in the hopper, increasing the storage risk.

Low disease. The crop should be relatively free from blackleg, sclerotinia stem rot, clubroot, alternaria and verticillium, as these diseases can result in premature ripening, which increases shattering losses.

Low frost risk. Canola seed is at significant risk for fall frost damage until seed moisture drops below 20 per cent. This moisture drop will take much longer in a standing crop, and as such, late-maturing crops can be poor candidates for straight cutting.

Pre-harvest spray. If the crop is a good candidate for straight combining but timing could be an issue, growers could try a pre-harvest spray application of glyphosate, saflufenacil or diquat to move harvest along while keeping shatter and pod drop to a minimum.

Short, severely lodged, or excessively branched canopies may be candidates for straight combining because if swathed there would be small windrows and minimal stubble left to anchor them in high winds. In this situation growers should consider the potential for wind damage to the swath relative to shattering risk if left standing.