Canola and all other grains will naturally form a peak when augered into a storage bin. Because air takes the path of least resistance, it often exits the grain mass before reaching the peak. Flattening the peak will help with uniform conditioning and drying.

The cone shape that grain takes after filling a bin is an enemy to airflow and heightens the risk of spoilage.

“We can observe two to three times higher airflow rates through the sides, and poor to negligible airflow through the core,” says Singh, who co-authored a recently published paper on the subject.

“Air will take the path of least resistance to move through the grain,” adds Charley Sprenger, project leader and engineer-in-training at Prairie Agricultural Machinery Institute (PAMI). “Therefore, it will move to the region of lower static pressure — bin edges — more easily than the core of the bin.”

Uniform airflow is required for safest storage management, but airflow is impacted by the static pressure resulting from a column of stored grain, Sprenger points out. “Static pressure is directly related to grain depth,” Sprenger says. “Therefore, static pressure is greater below a peaked cone of grain where the depth is highest, versus the sides of the bin, where the vertical height of the grain is lower.”

Drying or cooling the core would require two to three times more fan time, and even that wouldn’t necessarily guarantee complete conditioning of grain in the core, Singh says.

“Overall impact of peaked grain would be inefficient, slow and non-uniform drying and cooling, increased shrink, and higher fan power consumption,” he says.

Levelling the grain is one potential fix to the airflow problem. “When the peak (or cone) of the grain is levelled, the height of grain is uniform, and so too is the static pressure,” says Sprenger. “Therefore, the airflow should travel uniformly through the grain.”

That may be easier said that done as levelling can be labour intensive,
Singh says.

Partial unloading of a peaked grain bin would be a more practical solution to improving airflow through the core. However, Singh stresses that while partial unloading can significantly improve the airflow, it needs to be done in a way that doesn’t create a large inverted cone. In this co-authored study, Singh estimated that unloading about nine per cent of the total grain volume was sufficient to improve airflow for aeration.

Sprenger concurs, explaining that by unloading some grain, the core will be removed first, thereby bringing the peak down. That removed grain can then be augured back into the top of the bin. “The grain can be placed back on top without too much peaking again as a hollow will have appeared from the core being removed,” Sprenger says. 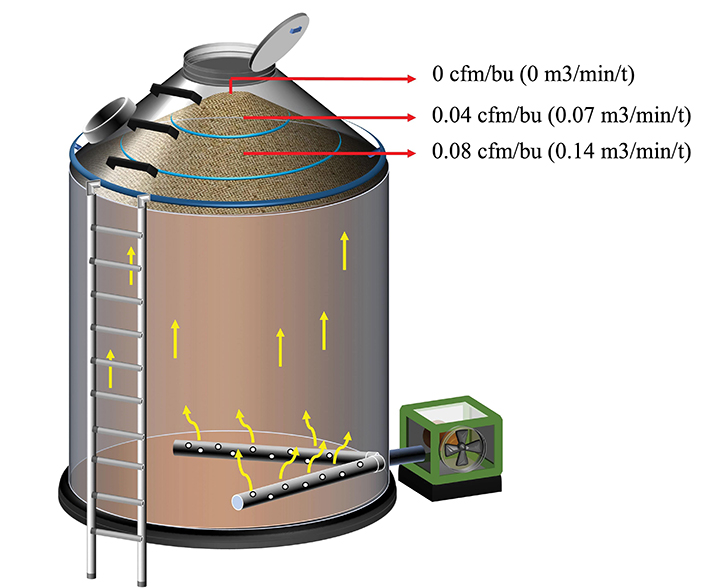 This graphic demonstrates results from Chandra Singh’s study on airflow, which observed two to three times higher airflow rates through the sides, and poor to negligible airflow through the core. Airflow is given as cubic feet per minute per bushel (cfm/bu.)

One practice Sprenger advises against is the use of gravity spreaders during loading. What makes them less than ideal is the fact that the packing pattern of grain as it fills the bin is different versus loading. Gravity spreaders in this context will actually cause higher bulk density, leading to lower porosity, and therefore even higher airflow resistance, Sprenger says.

Stirrers are a better bet for improving airflow, but still not ideal, as they could be constrained if the bins are equipped with multiple moisture and temperature cables, Singh says.