Researchers identified a sex pheromone used by female canola flower midge. The sex pheromone can be produced synthetically and is highly attractive to males in the field. This identification will facilitate development of a pheromone-based monitoring system for C. brassicola.

“Development of a pheromone-based monitoring system for a newly identified Contarinia midge on the Canadian Prairies,”
Meghan Vankosky, AAFC Saskatoon 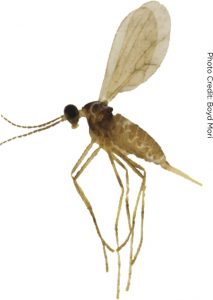 The canola flower midge, Contarinia brassicola Sinclair (Diptera: Cecidomyiidae) is a newly-described species that induces galls on canola. The galls prevent flowers from opening and pods from forming. The small size of C. brassicola and its similarity to other species of midge make detection and identification difficult, such that damage to crops by C. brassicola is often overlooked. A pheromone-based trap could help.

Many midges of agricultural importance use sex pheromones, which are species-specific volatile chemical signals, to coordinate mate finding. Once these species-specific pheromones are properly identified, synthetic versions of these chemicals can be used as the basis of sensitive pheromone-based monitoring and management tools.

This study aimed to identify and synthesize the female-produced sex pheromone of C. brassicola and demonstrate its effectiveness in attracting males to traps in the field.

Using gas chromatography-electroantennography (GC-EAG) analysis of female-produced volatiles, two chemicals were identified that elicited responses in male antennae. Four versions of the major chemical, 2,7-diacetoxynonane, were synthesized and used in field trapping trials. The versions used separately were unattractive to C. brassicola males. However, by testing various blends, the research team did identify a blend of synthetic pheremones that was highly attractive to males in the field. This identification will facilitate development of a pheromone-monitoring system for C. brassicola.