Flea beetles are one of the most prominent pests for canola, and were particularly harmful this year with the warm and dry spring, which disadvantaged the crop and encouraged flea beetle development. This article looks back at 2021 and provides some management tips for 2022. 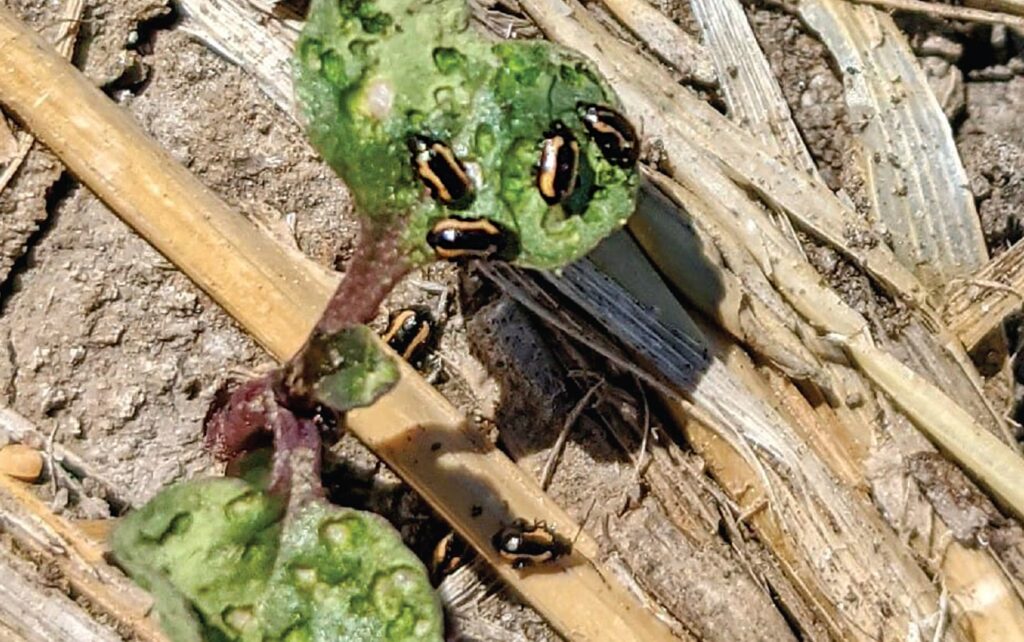 Our May 5 Canola Watch quiz included this question: “Flea beetles tend to cause more damage in slow-growing canola crops. John Gavloski, entomologist for Manitoba Agriculture, says canola will have lower risk of flea beetle damage if conditions are conducive to rapid growth. Gavloski says canola will be at lower risk of flea beetle damage if it goes from seeding to the four-leaf stage in ______________.” The answer is three to four weeks.

The result was weak-looking canola crops, quite a bit of reseeding and in-crop insecticide spraying.

For more on flea beetle lifecycle and management, read the “Flea beetle” chapter in the Insects section at canolaencyclopedia.ca

Nicolea Dow farms at Portage la Prairie, Manitoba. “When you seed early, the clock for seed treatment starts ticking and by the time the crop comes up you don’t have a lot left, so we try to seed later to get the crop up quick,” says Dow. “That didn’t help this year. We got a frost after May long weekend, right as plants were coming through the surface. Then we had a week of extreme heat. In that week, canola seedlings had four or five days with no growth while flea beetles kept eating.” Dow checked canola fields every other day, sometimes  every day, through this stretch, and had to spray some fields three times. “Those spray decisions were made following thresholds and guidelines, not as an overreaction,” she says.

Dow says “farmers were beyond frustrated.” 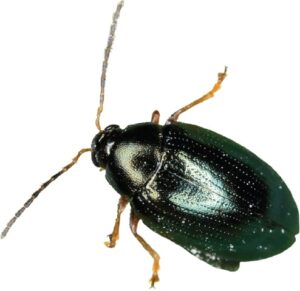 There is no perfect solution for hot, dry growing conditions. Crops hate it. Flea beetles love it. Here are some tips that will help growers get their advantage back.

Ask for enhanced seed treatment. Neonicotinoid (or “neonic”) seed treatments are the primary insecticide seed treatment available, and in-field trials show they’re effective. However, they are less effective on striped flea beetles, which are becoming the dominant species in more areas of the Prairies. Neonic performance is also reduced in dry soil conditions. Neonics require soil moisture (more specifically soil vapour pressure) to translocate from the seed coat to the emerging seedling root and hypocotyl. When canola is planted into dry soil, the seed treatment stays with the seed coat or is adsorbed by surrounding soil particles (especially clay particles) rapidly. Plants must be actively growing to translocate the neonic from the roots to above ground plant biomass . When the plant has slowed or stopped growing due to stress, less neonic is translocated.

In the Canola Council of Canada survey of 1,000 growers in 2020, flea beetles ranked as the number one pest among those surveyed. The survey showed that Manitoba growers are the most likely to spray for flea beetles, with 82 per cent saying they sprayed in-crop for flea beetles in 2019 and/or 2020. Yet only 59 per cent chose seed treatment with enhanced flea beetle protection. Like most flea beetle management steps, enhanced insecticide seed treatments are not perfect, but when used in combination with other management practices, they should make the insect somewhat more manageable.

Leave stubble and surface residue. Stubble provides protection from the wind, and this protection keeps flea beetles feeding on leaves. This is a good thing. Without that stubble protection, flea beetles move out of the wind and start to feed on stems instead. Stem feeding can be much more damaging than leaf feeding. Soils with residue cover also don’t get as hot in the sun, and crop residue helps to retain moisture. Both of these factors help the crop advance more quickly, which is good protection from flea beetles. 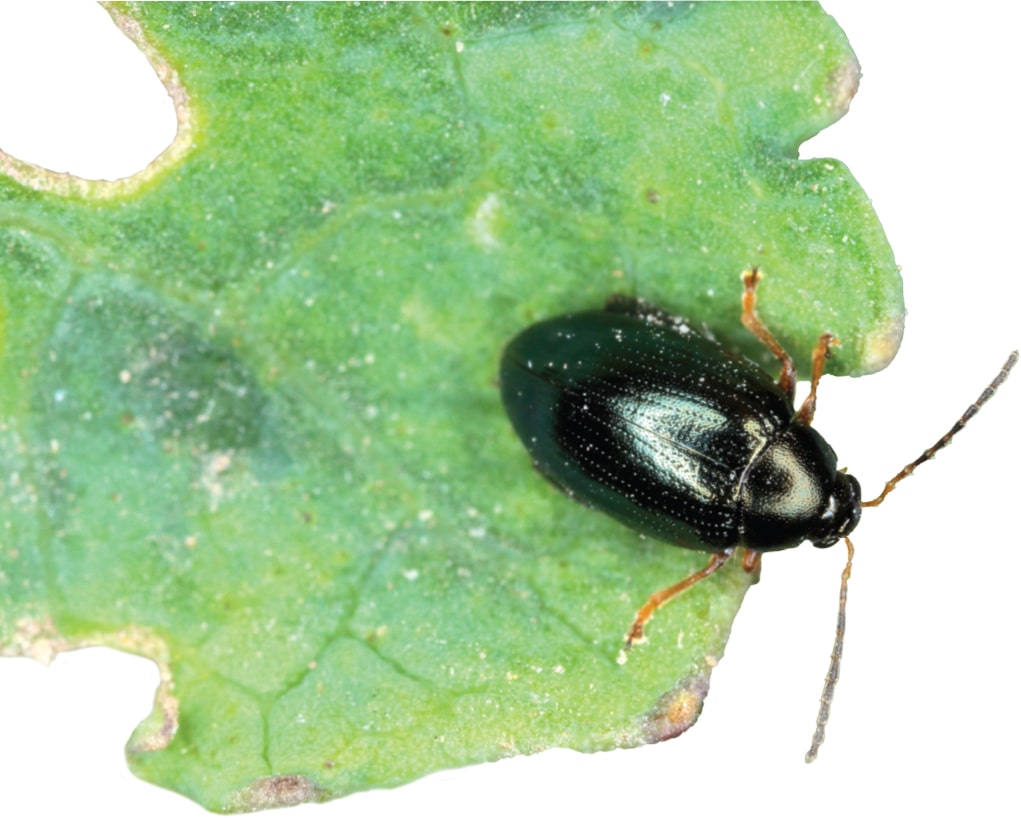 Wait for moisture. Rapid plant establishment depends on available soil moisture. If available soil moisture is low, seeding after soil moisture reserves are recharged can help the crop grow from seeding to four-leaf in three to four weeks. It also gives the seed treatment a chance to help. Dane Froese, oilseed specialist with Manitoba Agriculture, says, “a little patience played out very well for some farms in 2021.”

Improve the efficacy of in-crop insecticide applications. This might be a bigger deal than people realize. Pyrethroids have restrictions for application in higher temperatures. The label for pyrethroid Decis (active ingredient deltamethrin), for example, says: “DO NOT spray under a strong temperature inversion, or when temperature exceeds 25°C as this will result in a reduction in control.” Tank mixing with herbicide also reduces efficacy because low-drift herbicide nozzles, which are a good practice for some herbicides, produce a coarse spray droplet that may not provide efficient coverage or flea beetle contact for higher product efficacy. As sprayer specialist Tom Wolf says, “the likelihood of a flea beetle ingesting leaf tissue at the spot where the insecticide hit is low, and gets lower the larger the droplets.” Dow says, “these foliar sprays are not terribly effective,” and the factors described in the previous paragraph could explain why. If farmers can improve insecticide efficacy, they won’t have to spray as often – which would be good for them, for their farm profitability and for biodiversity. Froese saw wide discrepancies in flea beetle damage from field to field in Manitoba in 2021, even when those fields faced the same temperature, moisture and wind stresses. “Huge differences in field survivability are not always a direct result of flea beetles, but a combination of factors, like seeding date, soil temperature, seeding depth, seed-placed fertilizer rate, seedbed moisture at time of seeding, previous crop residue cover and seed treatment.”